All this happened despite the fact that all outstanding projects promised by Modi-1 and Modi-2 are pending or badly behind schedule, and despite no relief forthcoming to Nepal on many Nepal-India issues including border inundation, demonetization loot and harassment of travelers. 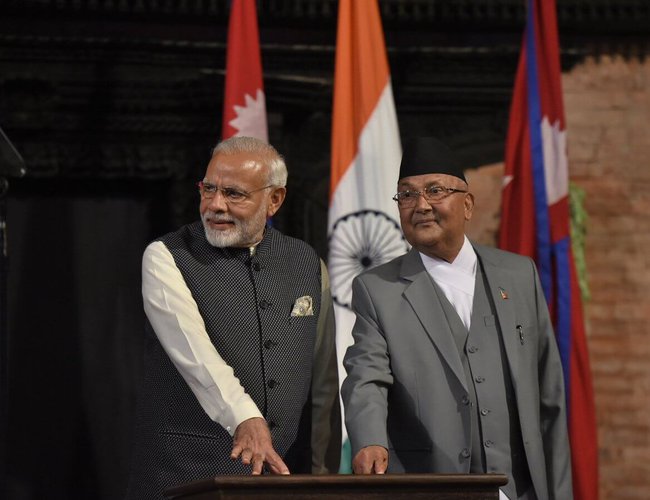 After India's PM Modi's blitzkrieg visit in May two weeks ago –  his third visit to Nepal after the first in August 2014, second during the SAARC summit in November 2014 – Nepali politics is abuzz with the L* word targeted towards his host, Nepali Prime Minister Oli. One of the best places to get a download debrief on the latest political pulse is the news kiosk at Patan Dhoka. Unlike other newsstands, this one is special because of its proximity to the highly politicized Patan Campus, and its regular faces are student leaders and teachers from across the political spectrum – Maley, Mashaley, Mandaley to borrow Girija Koirala's phrasing that captures the left to right range, and to add to the list Kamandaleys, Girija's own loyalists from the Kangress as well as other communist factions, and to correctly rename the Panchayat leftovers as Pamandaleys.

The consensus wisdom of the kiosk cognoscenti is that Modi's third visit has completely washed away any sheen of nationalism left on Oli and exposed him to the L epithet. Wait, say the Pamandaleys and other far left communist Kamandaleys, when was he ever a nationalist? Did he not sell out on Mahakali in 1996 with his recorded statement hoodwinking the parliament that Nepal would earn 120 billion rupees per annum from the project? Harrumph the Mashaleys, he was still a comrade-in-arms then that might have been led astray by his worthless advisors and bureaucrats, but this time he has crossed the L line irredeemably.

The Maleys no longer display any vestige of triumphalism (especially since the Prachanda-Oli merger) and have stopped saying Oli is greater than Prithvi Narayan Shah but ask meekly that final opinion be deferred till Oli's visit to China. Indeed, we may have to wait for that, and to begin to piece together what consensus might have been reached between Modi and Xi Jinping in Wuhan at the end of April, consensus on Doklam, indeed the entire Himalayan frontier between the two including Nepal. Oli's success in the forthcoming China visit will definitely be within the constraining parameters of Wuhan, and one may not even have to read the tea leaves for that.

What went wrong for Oli? Public memory is short (remember Harold Wilson's "a week is a long time in politics"?) and few remember the "sun rising from the West" hype of Mahakali twenty-two years ago. People, however, do remember India's blockade of September 2015 and blame Modi squarely for it even though he is as much a victim of the Indian Deep State whic was its main architect that made mulch out of his "neighbourhood first" policy. Oli in 2015/16 had refused to make the obligatory first trip to India until India lifted the blockade (much to the chagrin of its Madhesi clients who felt let down). He had opened the China route leaving Nepal much less India-locked despite the fact that India managed to get his partner Prachanda to subsequently stab him in the back and team up with the Kangress.

His nationalist credentials remained intact, and they remained mainly undamaged with his early April visit to Delhi when the plan to jointly lay the foundation of Arun-3 from Delhi was shelved at the last minute. All this happened despite the fact that all outstanding projects promised by Modi-1 and Modi-2 are pending or badly behind schedule, and despite no relief forthcoming to Nepal on many Nepal-India issues including border inundation, demonetization loot and harassment of travelers.

All that Teflon protecting Oli took a nasty beating in May with Modi's Janakpur-Mustang visit which was billed as a mainly religious visit, but often had the subtlety of a military invasion. He arrived directly from Delhi (not Patna as originally planned) to Janakpur in a military aircraft and was welcomed at the Janaki temple's official podium with a caricatured distortion of the Nepali flag planted by the Indian security apparatus that was in control. The municipal reception was packed with (reports have it) over fifty thousand Bihari BJP supporters from across the border, and the chief minister of Province 2 insulted the rest of the Nepalis and the Nepali constitution on this solemn occasion. Mustang pilgrimage was less controversial but the locals are reported to be upset because (as with his visit to Pashupatinath temple during his first visit) he entered the sanctum sanctorum where none save the priest (and previously the King of Nepal) should have. Oli's atheist government of Nepal remained a mute spectator, angering the faithful.

The worst example of L-ism was the laying of the foundation of Arun-3 from remote control at Dwarika's Hotel. However, to understand why that was bad, one must first step back in history. When this project, then promoted by the World Bank with six other donors, was opposed by activists, it was because of its excessive planned cost and the unacceptable to any sovereign country conditionalities that came with the Arun-3 package. Hydropower projects of that kind are usually built at costs of around US$ 1000 per kilowatt: the World Bank was planning to do so at US$ 5400/kW.

This criminal irony of developing a hydel project at five times the market cost in one of the poorest country with some of the richest hydropower potential was discussed by some of us opposing it at Senate Dirksen Building of the US Senate with senators responsible for foreign aid appropriations, with the US assistant secretary for treasury, at the House of Lords in the UK, with a very high powered Japanese delegation consisting of several directors who find it difficult to meet as one even in Japan (it was said), as well as with the then US ambassador Julia Chang Bloch. Her words still ring in my ears: "The US government does not put in money for infrastructure development through the USAID but through the World Bank because we believe it does the best professional job. If Arun-3 is an example, we certainly need to re-think that policy." Well, the US certainly has, having now created the Millennium Challenge Corporation with Nepal benefitting from its proposed transmission line development.

In the face of this professional opposition, the World Bank backed out in 1995; but Nepal's main political parties failed to learn the right lessons from it. They vowed to "return Arun-3" but in their misguided attempt, what they managed to do is to make it an export project where its cheap electricity goes to India (including what Nepal is to get "free"), with Nepal being forced to buy back dirty coal-fired electricity (as she does now) at higher price. This handing over Arun-3 was done bypassing the parliament and the provision in its constitution for parliamentary ratification thus making it wholly illegitimate in the eyes of many Nepalis. By relying on an institutional memory- and capacity-less formality called the Investment Board and allowing that body to issue the generating license which by law only the Energy Ministry can, and that too without first concluding a power purchase agreement and financial closure as per the law, Oli is now completely entombed within the treasonous-sounding L word. Arun-3 has now become not only illegitimate but also illegal, and that is hardly a good foundation not only for such a big project but also for Nepal-India relations.

Oli has forcibly merged his UML party with Prachanda's Cash Maoists in a top-down manner that has left many senior figures and many more party cadres of both parties very dissatisfied. His energy minister Barsha Man Pun did not attend the Arun-3 foundation laying ceremony and the Maoist spokesperson Pampha Bhusal said in parliament that it violated Nepal's constitution. But by taking away the energy ministry's power to the Investment board chaired by the prime minister and by taking away key investigative powers of the home ministry to the prime minister's office, Oli might have succeeded in cutting his partner Maoist ministers down to size and humiliated them. But would that lead to the "five years of stability" that Oli-Prachanda promised to the Nepali people? But then maybe that rift is precisely what the staunchly anti-communist BJP prime minister wanted to engineer in the first place with his third visit to Nepal! We may just have to wait for Oli's pending China visit to see how the "Wuhan Understanding" is going to play out.

Summit For Democracy And Focus On Human Rights By Professor (Dr) Surya Dhungel 1 day, 13 hours ago

Remembering Our Kings: Reflecting on Our Nationhood By Dipak Gyawali 5 days, 5 hours ago

Youth Engagement In Tourism Promotion Of Bungamati By Sreejan Shrestha 5 days, 5 hours ago

OFF-THE-RECORD TEA-TALK Need Of Pragmatism In Nepal’s Foreign Policy By THE BRAINSTORMER 5 days, 13 hours ago