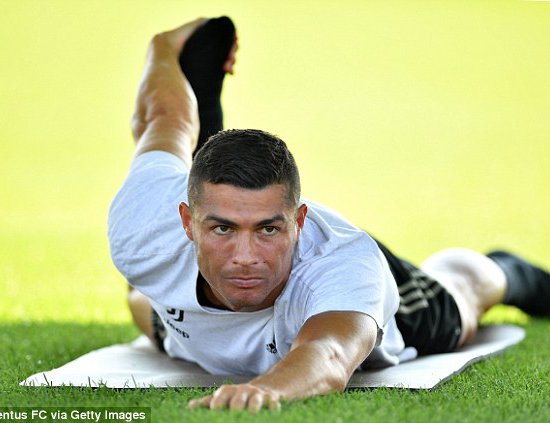 Cristiano Ronaldo has trained alongside his new Juventus team-mates for the first time following his £100million move from Real Madrid.

The Portuguese star, who is training in Turin following his extended post-World Cup break instead of joining Massimiliano Allegri and the rest of the squad on their United States tour, looked delighted to get down to work.

Ronaldo smiled and gave a double thumbs up for the cameras as he jogged at Juve's training base on Tuesday and posed for a group photograph alongside new colleagues Gonzalo Higuain, Paulo Dybala, Juan Cuadrado, Douglas Costa and Rodrigo Bentancur.

He also posted a snap of him and his team-mates on Instagram with the caption 'First training hard. Work done!' He finished it with emojis of a thumbs-up and a bulging bicep.

And, Ronaldo being Ronaldo, he rolled up his shorts in customary fashion while jogging during the training session. 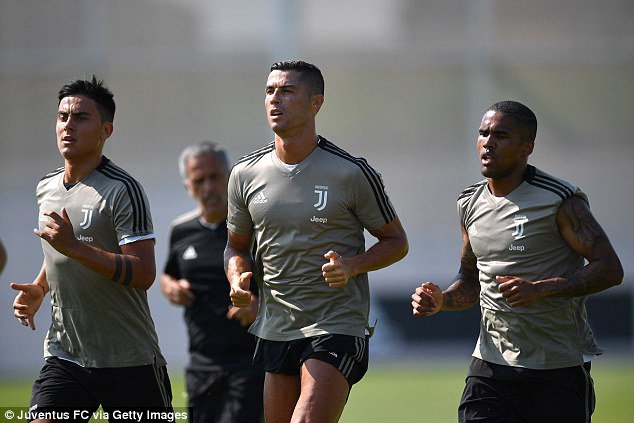 It followed an intensive series of fitness tests on Ronaldo's first day with Juventus on Monday after he jetted back from the holiday he took following Portugal's last-16 exit to Uruguay at the World Cup in Russia.

The 33-year-old looks in peak fitness as always as he prepares to try to propel Juventus to the kind of serial Champions League success he enjoyed in nine seasons with Real Madrid.

Juventus take on Real in the International Champions Cup in the United States on Saturday, but Ronaldo is set to remain in Italy ahead of an expected competitive debut at Chievo in Serie A on August 19.

He will get to know Allegri and the rest of the Juventus squad better when they return from the States. They also take on the Major League Soccer All-Stars in a friendly in the early hours of Thursday morning UK time.

Ronaldo spent time in Greece with his family after Portugal's elimination in the World Cup last 16, before jetting off to China for his annual CR7 brand tour with Nike.

But his arrival at Juventus heralds the start of the serious training work for the five-time Ballon d'Or winner.