The Hug Of War

The hug might have appeared 'immature’ to some but it did its job pretty well. Gandhi’s speech focused on how the BJP was practising politics of hate and how the Congress, on the other hand, was in no mood to engage in divisiveness, polarization or revenge. 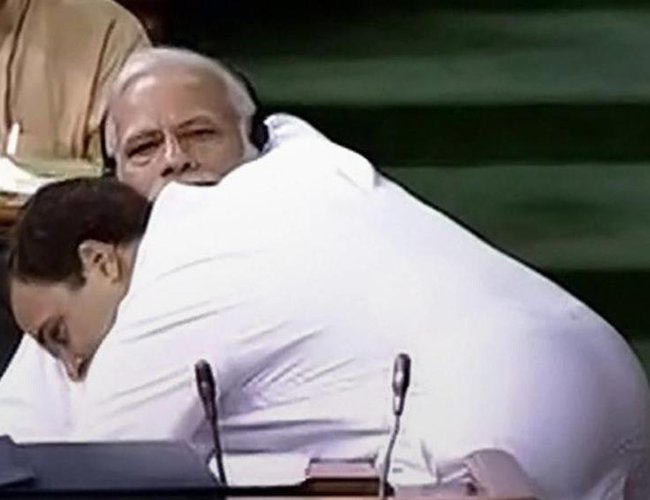 In an action packed Lok Sabha debate on the no-confidence motion against the BJP last month, Congress president Rahul Gandhi did what no one expected him to do. He walked down the aisle and hugged the target of his hour long scathing speech, Prime Minister Narendra Modi. It didn’t take long for the hug to trend on the social media and visuals of it started playing repeatedly across television channels. The Indian prime minister is someone who is open to such displays. He has embraced leaders from Donald Trump to Vladimir Putin. Yet when the much younger and less experienced Gandhi came around for the gesture, he appeared taken aback, stiff and most importantly, irritated. While Modi might have won the no-confidence motion, it was Rahul who won carefully crafted strategic game.

The hug might have appeared 'immature’ to some but it did its job pretty well. Gandhi’s speech focused on how the BJP was practising politics of hate and how the Congress, on the other hand, was in no mood to engage in divisiveness, polarization or revenge. He recalled the party’s rich history and reminded the parliament of the unifying role that the party had undertaken post the independence. Following on the footsteps of his predecessors, Gandhi wanted to show how they were still committed to the same old values. His action also signaled that he was open to treating even his adversaries with respect - much like what the statesman Nehru did. By publicly owning the jokes that are made of him plus through the hug, the Congress president was able to relay a message that he was unmoved by such criticism and he was indeed all about spreading a more positive message politics unlike the BJP which has often been alleged to spread politics of hate especially against minority groups.

What the Congress president also did was set himself as a contender to take on Modi in the elections of 2019. Until now, the Gandhi scion was only seen as an inexperienced, poorly informed and incapable leader who stood nowhere near to the much more strategic and experienced Modi. The ‘hug’ showed that the Congress was now catching up to the BJP’s (especially Narendra Modi’s) game of ‘symbolic displays’. It gave the impression that the young Congress president was slowly learning the tricks of the trade. It also sent the signal that Gandhi had slowly started overcoming his perceived drawbacks: his hesitation and nervousness. In his defense speech, it was quite visible that Modi was taken aback and had not still not recovered from the unprecedented move. He spent his one hour speech attacking Congress and the Gandhi family and did not provide any convincing arguments to defend the achievements of his government. Until the ‘hug’, he had enjoyed a public image which was carefully crafted by his PR team. This was somewhat busted in the parliament and it was clear that Modi felt exposed.

While Gandhi’s hug did become a palpable symbol of the forgiveness and tolerance, his idea on the model of Hinduism which he dwelled on in detail in his speech was also particularly noticeable. For now it definitely appears that the young Gandhi scion is playing the catch up game is pulling up his socks for the 2019 battle.

Japan And Nepal Can Both Contribute To World Peace And Prosperity By Masamichi Saigo 2 days, 8 hours ago

Why Upstream And Downstream Linkage In The River System Can’t Be Ignored? By Pratik Poudel 6 days, 13 hours ago

COVID-19: An Overstaying Visitor without Visa By Dr. Omkar Shrestha 1 week, 2 days ago

How Effective Financial Reporting Started With An Initiative In The Education Sector By Smita Gyawali and Rajan Acharya 2 weeks, 1 day ago