Ukrainian Crisis And The World (Dis)Order

The West has had dominance in the world order ever since the end of the second world war. Up until recently, it easily called the shots.

After weeks of tension and numerous speculations, on 24th February, the world watched in horror as Russia declared war on Ukraine.

As it now crosses the 50-day mark, the war has inflicted significant damage – both civilian and military. More than 3,000 Ukrainian soldiers and 4,000 civilians are said to have lost their lives. Although the casualty on the Russian side hasn’t been confirmed, there are reports that it amounts to thousands. The sheer audacity of Moscow’s move has made it a watershed moment in global political history – one that has the potential of changing the political future of the region. In fact, not just the region, the move could change the political future of the world by possibly reshaping the existing world order. 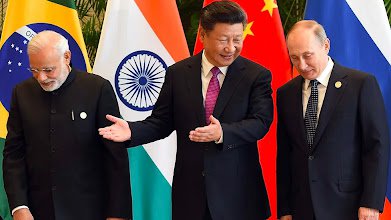 The West has had dominance in the world order ever since the end of the second world war. Up until recently, it easily called the shots. The recent crisis, however, has shown that it doesn’t have the same power anymore. Surprisingly, along with the combative Putin, the more subtle Xi is also turning out to be a holdout for the West. Beijing’s swelling economic and diplomatic clout in today’s world has played a big role in the recent Ukraine – Russia conflict. Although officially, Beijing has remained neutral, it has given a tacit backing to Moscow. This has been seen most prominently in its role in softening the impact of sanctions that Putin’s government has been hit with. In March, just after Russia launched its invasion, overall trade between the two countries rose over 12% from a year earlier. Moreover, before the invasion, the two countries, which share a 4,300 km border, agreed to boost their current trade worth USD 157 bn to USD 250 bn by 2024. When Xi and Putin met at the opening of the Beijing Olympics, the two agreed their countries’ relationship would have ‘no limits’ and ‘no wavering’. While the tightening sanctions have undoubtedly hit the Russian economy hard, the backing it has received from China has in many ways offset the impact of the sanctions. China has even criticized the West and its role in pushing the tensions to a ‘breaking point’ in the region. This has caused the United States to falsely accuse China and Russia of working together to create a new 'profoundly illiberal world order’. It cannot be denied that a new world order might be on the horizon, but calling it ‘profoundly’ illiberal is a clear sign of the fearful West.

But Beijing’s growing clout is just one of the factors. Russia’s steady recovery following the collapse of the USSR, Putin’s determination to keep the region free from Western influence, and most importantly, the EU’s dependence on Russia for oil and gas also means that Washington is now unable to freely exert its will as it used to. Russia supplies the European Union (EU) with about 40% of its gas and a third of its oil imports. If supplies are disrupted, the EU has no easy substitutes. This is the reason why European nations, despite taking some steps to reprimand Russia, haven’t been able to announce a complete abandonment. An example of this was seen in Germany. Germany, Russia's main export destination for natural gas, announced that it would put on hold the operation of the 1,200 km long Nord Stream 2 gas pipeline worth USD 11 billion. But it did not dare to announce a total boycott of imports. Washington has thus found itself unable to convince European powers to adopt tighter diplomatic strangulation measures. It is not just its European allies. Washington’s close Indo-Pacific partner and fellow democracy India has, just like China, acted neutral in the conflict. South block has long viewed Kremlin as a reliable and trusted partner going back to the early years of the Cold War and as a result, it neither condemned Russian action nor joined in the U.N. resolutions against Russia. Much to the fury of the US, Delhi is in fact looking to cash in on the opportunity to import oil from Russia at a discounted price. Thus at a time when Washington is ramping up efforts to rally international support to isolate Moscow, it faces defiant allies and partners.

The current turn of global events has also shown how inefficacious global governing institutions promoted by the West are. In early March, the United Nations General Assembly voted to demand that Russia stop its offense and immediately withdraw all troops. The vote saw 141 states vote in favor of the motion, five against, and 35 abstentions. But the resolution fell on Moscow’s deaf ears. A question that has been raised more starkly than the others is regarding the role of the United Nations Security Council (UNSC). According to Article 24 of the Charter of the United Nations, the UN member states — of which there are now almost 200 — ‘confer on the Security Council primary responsibility for the maintenance of international peace and security. But as a permanent member of the UN Security Council, Russia can veto any resolution condemning its actions in Ukraine. The very existence of the council and subsequently the governing institutions, which are a foundation of the current world order, is thus being questioned. As a matter of fact, the Ukrainian crisis was just one of the several tests for these governing institutions. The response of these institutions to many such recent global events be it the – return of the Taliban to power in Afghanistan, the uprising in Kazakhstan, or the coup d’état in Myanmar – has been apathetic and futile.

The growing might of Russia, India, and China has been a long time coming. But the Ukraine crisis has shown that these are not just emerging powerhouses; they have the potential to upend the entire world order – something that the West was clearly not prepared for. The only question is how soon.