Communist Party of China centenary celebrations Reading between the lips

Come 100 years later and China stands in a completely different position. It is an emerging superpower and has been overtaking the United States in almost every possible indicator – be it economic or others. 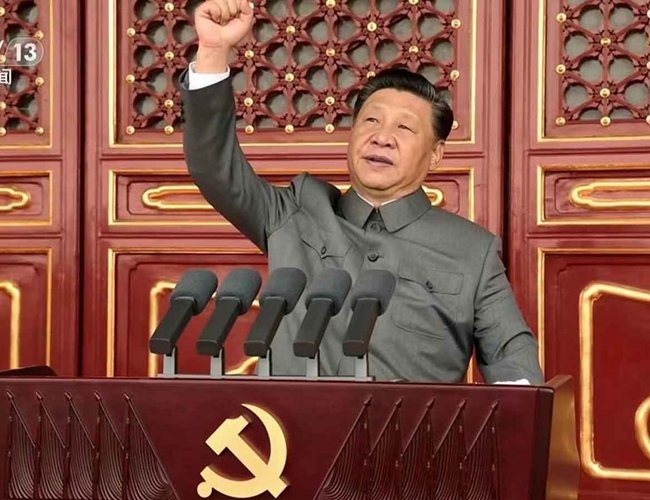 Marking the 100th year celebration of the formulation of the Communist Party of China (CPC), there were dazzling choregraphed performances, fighter jets flying in the sky and a carefully vetted crowdnationalist songs in Beijing’s Tiananmen Square earlier this month. But more than anything else, it was President Xi Jingping who hogged the limelight. More specifically, it was his speech.

“Foreign powers will get their heads bashed if they attempt to bully or influence the country.”

This warning brought rousing shouts and applause from the attending crowd of 70,000. It was a message directed directly towards the United States and its ally. Xi was clear in his message – China is not the same as it was a 100 years back when foreign powers bullied it, took away parts of its territory and waged war against it. When the CPC was formed in 1921, it was formed to fight the nationalist government with whom it engaged in a bloody civil war until the former’s victory in 1949. At the time, China had recently seen the end of the Qing dynasty which had been attacked by numerous foreign powers including the British. It had to forfeit one of its areas (Hong Kong) and lost its glory of the ‘Middle Kingdom’ days. China still treats this phase of its history as humiliating.

Come 100 years later and China stands in a completely different position. It is an emerging superpower and has been overtaking the United States in almost every possible indicator – be it economic or others. So it was not unusual for Xi during his address to sing glory of the new China. His threat to the ‘foreign powers’ that they would have their ‘heads bashed’ came in context of the maneuvering the West has been doing in the past few years to discredit China by raising issues of human rights andimplementing sanctions against it following the crackdown in Hong Kong. The Chinese leader’s message hinted that they cared very little about what the West thought about China and if in any case it tried to cross the line, it would not be afraid to retaliate.

Apart from this, what was also interesting in Xi’s speech was the subtle messages. Highlighting the role of the party in the development of China, Xi reiterated the role of the party in modern China, saying that it has been central to the country's growth and that attempts to separate it from the people would fail. To the old guards, some of whom see Xi as developing his own personality cult similar to that of Mao, the Chinese leader showed his commitment to the party’s value by saying that ‘only socialism could save China’, and only socialism with Chinese characteristics – the party’s official ideology - could develop China. A point he reiterated was China’s glorious 5,000 years of history which saw an end after West’s intervention. Xi highlighted that he wanted to bring back the country’s glory days.

The Chinese President’s strong message came not just from his speech but also, quite notably from his choice of uniform. Usually clad in an elegant suit, he appeared in the famous ‘Mao suit’ – a dress which was previously known as Zhongshan suit in the country but came to be known as the Mao suit because of the Chinese leader’s fondness for it. Xi appearing in the ‘Mao suit’ was a message that he adhered strongly to the party values, looked up to the country’s cherished leader and at the same time also proved that he waswalking on a path of similar legacy as the paramount leader. Carefully crafted message could be observed even in the crowd. None in the crowd of 70,000 had been wearing masks. Using the centenary celebrations, the party tried to drive home the message of its supremacy over Covid-19.

The centenary celebration event was thus more than just a celebration. It was an event to give out a strong message to the West and its allies. The West should take note. Instead of trying to ‘corner’ Beijing in the future, it would be in their interest to move forward by cooperating with it. If they do not do so, time will come when they will regret their decision.

Encouraging Electric Vehicle Use In Nepal By Hari Prasad Shrestha 7 hours, 20 minutes ago

China’s Rapid Transformation And Lessons To Learn By Krishna Silwal 3 days, 8 hours ago

Youths In Nepal Elections: From Social Media To National Platform By Sangya Dhakal 5 days, 6 hours ago