China’s Cautious Steps In The Graveyard Of Empires

Beijing’s relationship with the Talibans will be contingent upon a number of factors, two primary ones being Chinese investments and its national security. There is no way that Beijing will ‘rush to embrace the Talibans’, as speculated in the Western media. It is tactful and will not make the mistake of becoming another victim in the graveyard of empires. 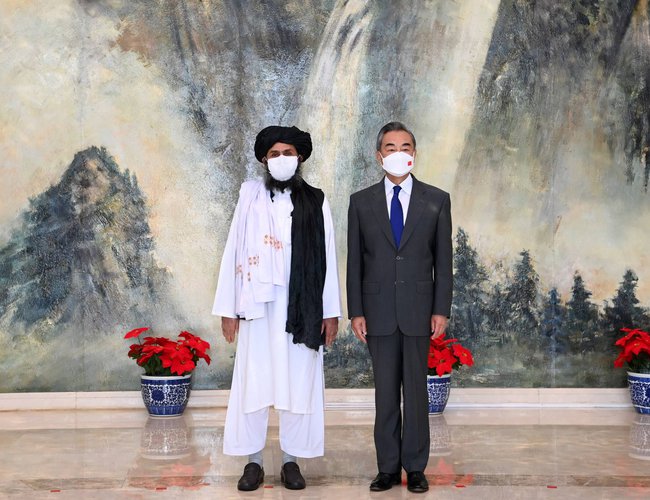 ‘We are fine till now with God’s grace’, replied my Afghani friend from Kabul responding to my text on Saturday as reports started to come in that Talibans were taking over swathes of Afghanistan. ‘It might take some time for them to reach Kabul. We are figuring out an escape plan’, he added.

But my friend never got the time to conceptualize his escape plan. The very next day after our conversation, dramatic scenes played out in the streets of Kabul as the Talibans marched in in their Humvees wielding machine guns. By late Sunday night, they had taken over the Presidential palace. My follow-up message to my friend asking about his and his family’s safety remains undelivered as I write this.

Given its location at the crossroads of Central, South, and Southwest Asia, Afghanistan is not new to volatility. In the 19th and 20th century, the Afghans fought three wars with the British, the final war in 1919 leading Britain to relinquish their control over Afghanistan’s foreign affairs. Under the leadership of the then monarchy, this isolated but a relatively peaceful country aimed to chart a road of development and modernity. But fate had other things in store. A coup in 1973 by the then King’s very own brother-in-law led to the overthrow of monarchy and introduction of a republican state. Five years later, another coup led to the establishment of a communist state. Dramatic events unfolded in 1979 when this former constitutional monarchy saw Soviet troops on its land to bolster the faltering communist regime. This consequently triggered a violent resistance by US, Pakistan and Saudi Arabia backed ‘Mujahideen’. It was clear that Afghanistan was now wedged between US and USSR in the cold war. The Soviet troops withdrew in 1988 but the country continued to see a prolonged civil war until 1996. The resulting infighting led to the rise of Taliban in 1996 who ruled until the Americans intervened in 2001.

The notorious turn of events, triggered by both internal and external forces, prove that Afghanistan is of strategic importance to multiple stakeholders. Ironically, every actor who has intervened has failed miserably creating a debacle for itself and the Afghani people. The Talibans’ swift ascendancy has shown that the US’s twenty years of mission in Afghanistan has also turned to be no different. Afterall, two decades of its mission worth USD 2 trillion collapsed in just about one week. At the time of this writing, it remains unclear about the type of rule and the form of regime the Taliban will be adopting, but there is a common fear that the country will again plunge into darkness. Aptly describing the US’s hasty withdrawal, Global Times, a Chinese state backed media said that ‘…the US’s desperate withdrawal plan shows the unreliability of US commitments to its allies: when its interests require it to abandon allies, Washington will not hesitate to find every excuse to do so’.

Many have now been turning towards China to see its reaction. In a clear case of propaganda, some Western medias have been saying that Beijing would try to fill the vacuum left behind by the US while others have pointed out that the Chinese leadership would ‘embrace Talibans’ considering the fact that the Chinese played host to a top Taliban leader last month. But these arguments are too naive. Unlike Western forces, China does not harbor intentions to intervene directly in other countries’ affairs. It’s engagement is usually subtle and diplomatic. Beijing’s relationship with the Talibans will thus be pragmatic and contingent upon a number of factors two primary ones being Chinese investments and national security.

In the case of Afghanistan, Beijing’s perennial concern is security. China’s highly volatile Xinjiang region shares a 90km border with Afghanistan. It is thus skeptical that Afghanistan will be a safe haven for the Uighur militant group - East Turkestan Islamic Movement (ETIM) which has been fighting for the independence of Xinjiang. The ETIM is known to have shared cordial relations with the Taliban. China will thus only establish friendly relations with new government in Kabul if they ensure that they will break off their ties with the ETIM and that their territory will not be used for anti-China activities . There have been hints that the meeting in Tianjin was set up to discuss this. The Chinese Foreign Minister reportedly called on the Taliban to fight and clearly divide itself from ETIM while the visiting Talibani leader also pledged that it would ensure no anti-China activity was held in Afghani soil.

China will also not establish any commercial links with Afghanistan until Kabul can provide assurance that it will be able to maintain stability in the country. China does not really have huge investments in the country currently as compared to Pakistan or other Central Asian countries. But given its location at the crossroads of Central, South, and Southwest Asia, it could play a pivotal role in China’s ambitious Belt and Road Initiative (BRI). Beijing will be looking to exploit this factor. But it understands that things are not so simple. Already, two of its investments in Afghanistan – the Aynak Copper Mine project and Amu Darya Oil Exploration project – which are worth USD 700 million are halted due to instability. Hence, China will take on a significant investment role only if there is a permissive security and political environment in the country.

Thus there are many factors for China to consider before it extends its hand of friendship to the Talibans. There is no way that Beijing will ‘rush to embrace the Talibans’, as speculated in the Western media. As a tactful diplomatic force, Beijing will be careful. Chinese Foreign Minister, Wang Yi, calling the Taliban ‘a pivotal political force’ hints towards the fact that Beijing is optimistic. But it also wants to wait and see. Andre Small, an expert on China says that Beijing is concerned about the risks of entanglement in Afghanistan, which is seen as a strategic trap that has diminished the other great powers that have involved themselves too deeply. China is tactful and will not make the mistake of becoming another victim in the graveyard of empires.