With small interventions such as rehabilitation, farmer managed irrigation systems, which had been unable to increase productions for centuries, are becoming a game changer in Nepal to increase productivity, diversify crops and commercialize agriculture. Financed by Asian Development Bank (ADB) with involvement of government agencies, local users groups and elected bodies, rehabilitated irrigation systems under Community Managed Irrigation Agriculture Sector Project (CMIASP) in Jhapa and Ilam districts have shown how proper local institutions and pertinent water supply can enhance productivity and commercial agriculture. At a time when bigger irrigation projects are yet to achieve success, the CMIASP has shown that small is beautiful 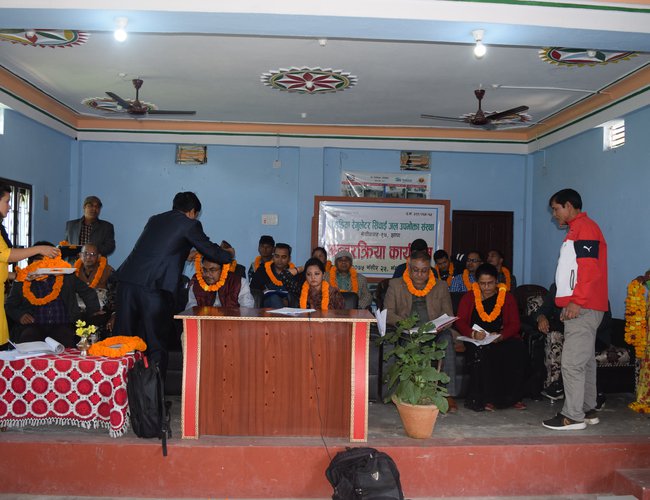 Fifty five years old Ganga Devi Bhujel has produced almost 50 quintals more of rice than the last year. A resident of Mechninagar Municipality, ward 4, Bhujel has increased the production after she received uninterrupted water during the paddy period this year. She is expecting a similar flow of water for her corn for this season.

“We have had an irrigation canal here for long but it used to be irregular because of frequent disruptions in the canal and its head,” said Bhujel, who is also a member of Hadiya Regulator Irrigation User Association “We have to go almost every day to the head during the monsoon to protect it from flood.”

After the construction of permanent structure and concretization of canal systems, the supply situation has changed.

Having five katthas of land, she used to produce 125 quintals of rice. This year her paddy production reached 180 quintals.

After the completion of the rehabilitation word of Hadiya Regulator Irrigation Project, the farmers of about 900 households of ward no 1, 2, 6, 7 and 8 of formerly Duhagadhi Village, currently ward no 4 of Mechinagar Municipality, received uninterrupted water for paddy.

Bishwo Thapa, headmaster of a local school of Mechinagar Municipality, has also seen the change in the production pattern. “All of us have a good harvest this year. Unlike in the past, our irrigation canals have carried persistent levels of water all the time,” said Thapa. 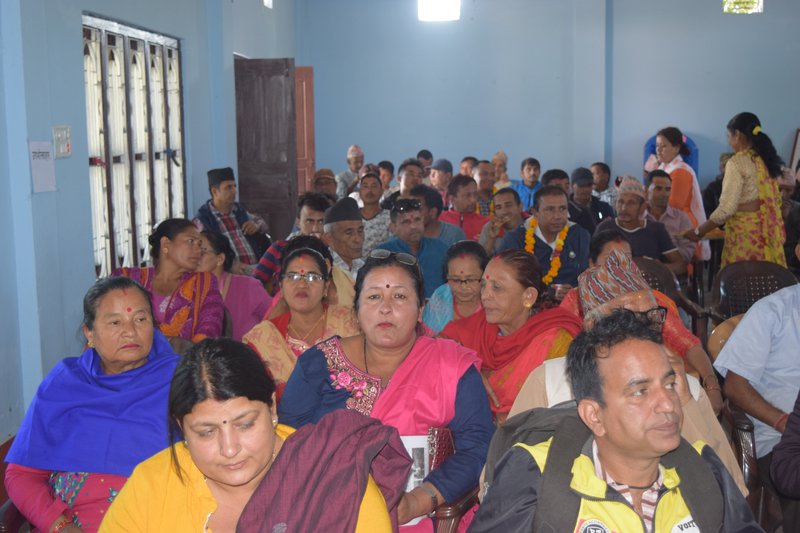 With the rehabilitation of old canal using cement and concrete, the problem of water leakage has come to an end as farmers received enough water this time. In the past, farmers living in the upper stream used to receive abundant water and farmers in tail end always received less water and late.

During the paddy season, there used to be disputes among the farmers of upper side of the canal and tail. “As a political leader, I had to visit the canal to see the distribution of water equally and settle the disputes between farmers of head end and tail ends,” said Shanker Prasad Pokharel, former chairperson of Duhagadhi Village Development Committee and now elected chairperson of ward 4 of Mechinagar Municipality.

With the rehabilitation of the irrigation system, the consumers have also constituted Hadiya Regulator Irrigation Water User Group under the chairmanship of Pokharel. To make it more formal and institutional to operate and maintain the canal, the Water Users’ Group has set up its own office and maintained documents.

“Following the establishment of the formal office with the office bearers chosen by the users for two-year tenures, we are more organized and accountable. To make it inclusive, we have representative from women and other marginalized communities,” said Pokharel. 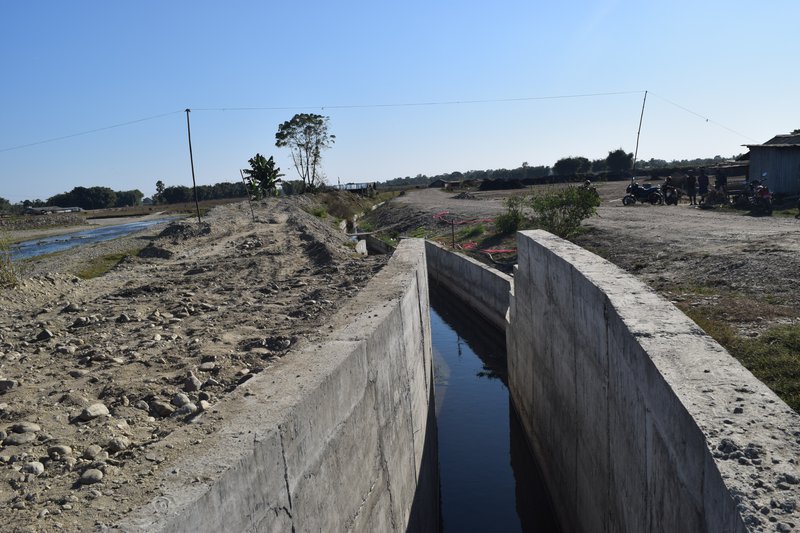 “After rehabilitation of the canals and intake, the flow of water increased and all the farmers received the water as they required for rice. We have already drawn a plan to supply the water for corn and wheat,” said Abhi Narayan Mainali, treasurer of the user group.

Along with these facilities, the headwork diversion structure was also constructed using weir. With the total cost of Rs.72,141,700.00, the per hectare cost of the project is Rs.206119.14. 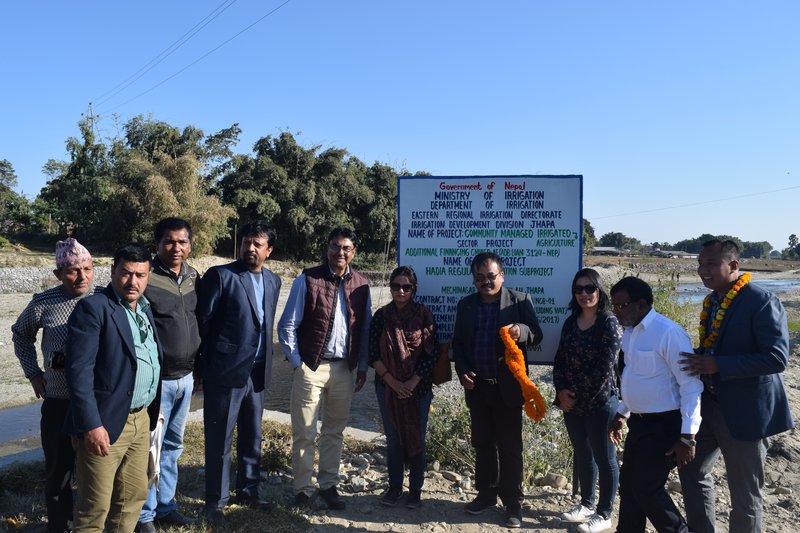 During the inspections of canal

Farmers used to spend a lot of resources to operate the Hadiya Regulator Irrigation system which was constructed using traditional materials like stone, bamboo, sand bag and mud almost 40 years ago,.

Constructed by using traditional materials, the system saw the river frequently washing out head and canal, disrupting the water supply. However, the system is strong and safe, following the completion of rehabilitation work and the farmers do not have to face the problem.

Along with the rehabilitation of physical structures, District Irrigation Office and District Agriculture Development Office guide farmers to diversify the agriculture products and support commercialization efforts.

“The District Agriculture Office has been helping us to diversify and intensify our agriculture. However, the challenges before us now is marketization, non-availability of improved seeds, water leakage and depletion of water at the sources,” said Pokharel. “Lack of loan for farmers on a concessional basis and modern equipment is still a problem in the agriculture sector,” said Pokharel. “We have rehabilitated the irrigation and the user association will focus on how to make things better for agriculture.”

As the rehabilitation of the irrigation project is near complete, the District Irrigation Office, in coordination with the District Agriculture Office, is encouraging farmers to intensify agriculture.

As the farmers of the Terai plains do, the farmers of hills of Ilam also have similar experiences to share. Rehabilitated under the Community Managed Irrigation Agriculture Sector Project Additional Financing (CMIASP) AF, farmer managed irrigation system of Adheri Karphok Thapeni of Ilam district has also drastically changed the agriculture pattern of the village.

Connected to Jhapa and Ilam of Nepal and India’s hill city Darjeeling through the highway, farmers of Karphok Thapeni are busy to produce vegetable which has high demand from all three areas.

Forty-eight years old Naren Shrestha, a local farmer, has switched from traditional one crop year to intensive vegetable production. Not only for Shrestha, the regular water supply, through the rehabilitated canal, has opened a door of opportunity for all the beneficiaries of the irrigation project. Relying on one crop a year, agriculture produced food for people to meet their needs just for half a year. With irregular irrigation, farmers had few other options. 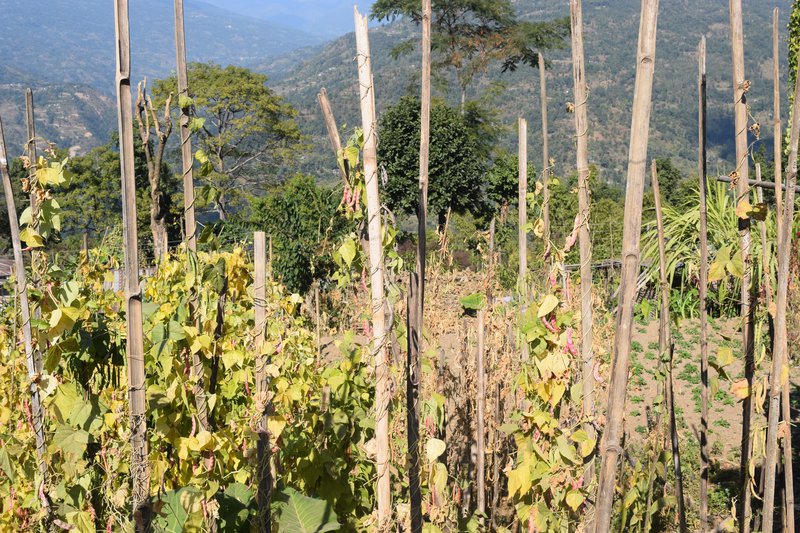 “Although the irrigation system is almost fifty years old, the water supply used to be irregular as floods frequently washed out head and canals. As the canals were constructed using local materials, leakage was higher,” said Shrestha. “Given that situation, only option before us was to grow one crop a year.”

Along with Shrestha, beneficiaries of the Karphok Thapeni are now growing various kinds of vegetables targeting the market. Along with cauliflower, cucumber, beans, cabbages, garlic, radish and tomato, farmers are also planting ‎black cardamom and ginger.

“Following planting vegetables, our annual income from agriculture has increased by many folds. I sold almost Rs.150, 000.00 of vegetables this year from three ropanies of my land. Although there are high demands, I am unable to meet all because of lack of equipment to prepare the land. We have permanent irrigation canal now and we are considering bringing some machineries to till the land,” said Shrestha.

With the rehabilitation of canals, there is enthusiasm among the farmers, with women being more enthusiastic than men. Thirty-five years old Sabita Bharadhwaj is now a leading vegetable farmer in the area. “After rehabilitation of canals and head, we also have received a high breed vegetable seeds, agriculture extension and market related training,” she said. “Following the planting of vegetables, our annual income has nearly doubled. We used to produce less than Rs.15, 000 ($150) equivalent in grains for one ropani of land. Now, we are producing vegetables worth of Rs.60, 000.00 ($600).”

Following the regular supply of water in irrigation canals, farmers are giving up traditional crops and growing the vegetables. “Over ninety percent of farmers are growing vegetables and our place is known for its vegetables,” said Chandaramani Gautam, Chairman of Water User Association. “Rehabilitated canals are not only carrying adequate water but also reviving the hope of farmers.”

With the gross command area of 196 ha and command area of 90 ha of 144 households and 703 people of places, formerly ward no 2 and 4 of Godak Village Development Committee and now Ilam Municipality Ward 10, the project aims to develop infrastructure for availing year-round irrigation to 90 ha command area to increase farm productivity and income as well through introducing improved farming practices at farm level. 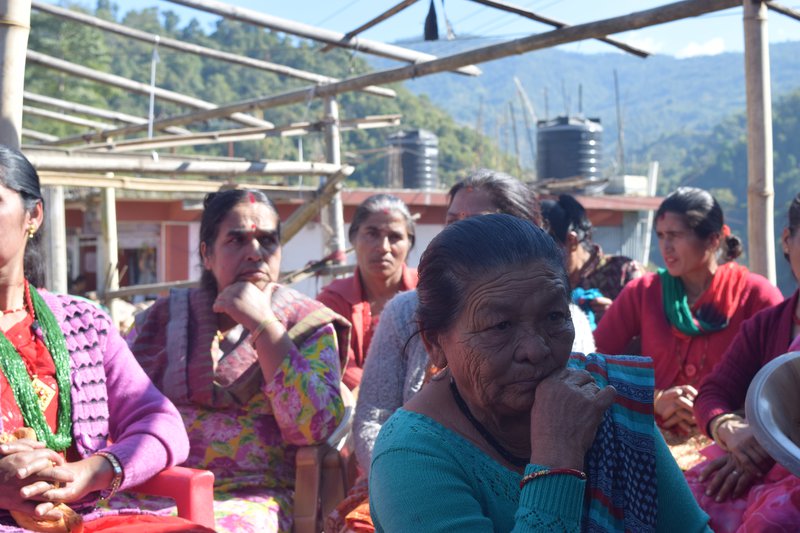 “Not only the rehabilitation of the irrigation canal, we are also providing different agronomical trainings, on-field demonstrations on improved farming technique, encouraging visits of the lead farmers to the best operating projects around the area, managing on-farm interactions and sharing experiences and learning between and among farmers are the part of the project strengthening the institutional capacity of Water User’s Association,” said Shailesh Pokharel, division chief of District Irrigation Office Ilam.

With a loan agreement signed in 2014 and closing in January 2022, the CMIASP- AF project has already rehabilitated 150 FMIS and 5 AMIS with irrigation of 19,920 ha Command Area.

Starting from Kankai Irrigation project in 1971 with 4.5 million, ADB provided $30.4 million for East Rapti Irrigation. Under various projects, ADB’s support in the irrigation sector is immense.

“ADB has been supporting Nepal’s agriculture and irrigation system for long. One can see visible impacts in the life of people after completion of irrigation projects operated under CMIASP,” said Singh.

In many other projects, sustainability remains a key challenge. However, CMIASP also backs farmers to constitute a formal institution to operate maintenance and manage the canal system. 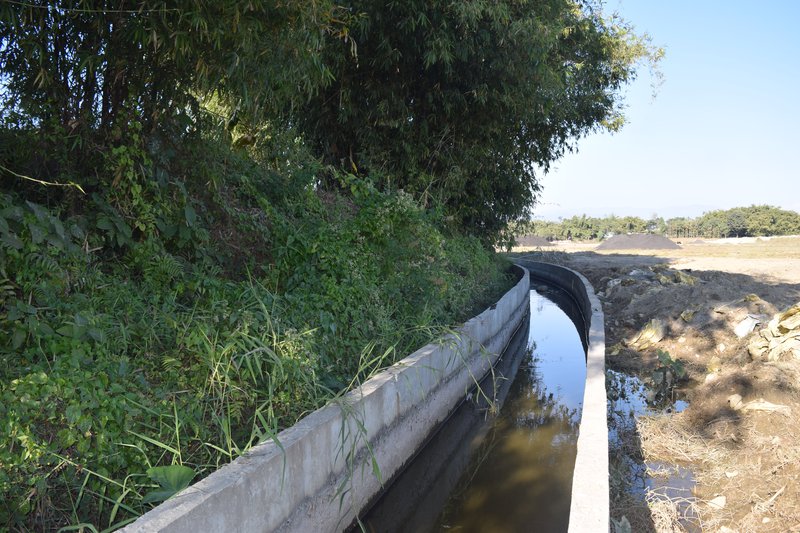 “In the context of difficulties in constructing big infrastructure in irrigation sector, including a sustained management, Farmer Managed Irrigation System in Nepal has shown a good way out to increase the command areas of irrigation. Managed, developed and operated by local people with their own institutions through WUA, CIASP’s concept has been bringing tremendous changes in rural Nepal,” said Madhav Belbase, joint secretary of Water and Energy Commission and former Director General of Department of Irrigation. “Although Nepal needs big irrigation projects to increase the command areas, rehabilitation of farmer managed irrigation systems is part of the solution to riparian issues involved in big projects.”

With the technical advice from District Irrigation Office and District Agriculture Office, both irrigation systems have Water User Association. Elected from the user groups, the association is responsible for management, dispute settlement and operation of irrigation systems.

Led by popular persons of the areas, the Water User Association also maintains its linkages with community and political level. At a time when construction of big irrigation projects involve so much of complicated issues of riparian rights, with time consuming and operations going beyond the capability of farmers, the two farmer-managed projects of Jhapa and Ilam have shown a way out to change the livelihood of the people. With so much of the local community involved in the small irrigation infrastructure, the investment of Asian Development Bank is helping to transform the livelihood, enhancing agriculture production and local capacity to operate the irrigation facilities.

Reporting from Jhapa and Ilam

King Birendra And His Family: Nineteen Years After Massacre By NEW SPOTLIGHT ONLINE 1 day, 4 hours ago

NEPAL-INDIA Bonds Across Border By Keshab Poudel 2 days, 19 hours ago

India Open To Engaging With Nepal In An Environment Of Trust And Confidence: MEA Spokesperson By NEW SPOTLIGHT ONLINE 4 days, 7 hours ago