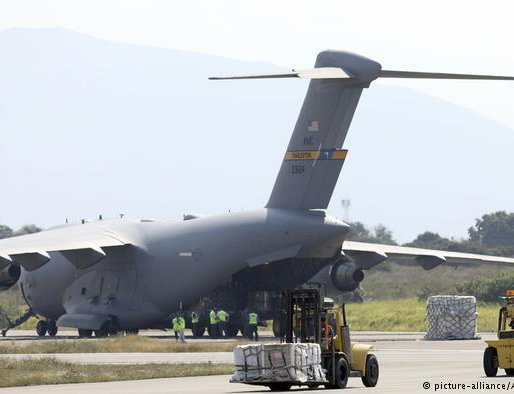 Self-declared interim President Juan Guaido has vowed to bring aid into the country and set up a volunteer network for citizens to participate. Nicolas Maduro denounced the aid as a planned US invasion in disguise.

Two US Air Force cargo planes landed in the Colombian city of Cucuta on Saturday. The shipment is part of self-declared interim president Juan Guaido's plan to deliver humanitarian assistance to the country. He said aid deliveries would begin on February 23.

Cucuta, a border city that has been near the epicenter of Venezuela's migrant crisis, has been designated as one of several collection points in the opposition's aid strategy.

The humanitarian aid strategy is the most recent battleground in the ongoing power struggle between Venezuela's acting President Nicolas Maduro and Guaido, who has been recognized by the US, Germany and a wide range of world nations as Venezuela's legitimate president.

"This wasn't the first, and it won't be the last," Mark Green, administrator of USAID, said of the aid in Cucuta. "More is on the way."

Lester Toledo, an exiled politician appointed by Guaido to coordinate the aid effort, was with Green. "We are saving lives with these airplanes," Toledo said.

Saturday's shipment included 180 tons of basic-needs items, such as high-energy food products, soap, toothpaste and other goods for more than 25,000 people.

Concerns Rise Over Tensions In Jerusalem By Agencies 3 days, 4 hours ago