The Nagarkot Women and Rivers Congress brought together mostly women activists who have earned their spurs battling river-related issues, many from opposing bad dams and mining projects that hurt local communities. As the Nagarkot Statement issued at the end of the Congress puts it, they see themselves as custodians of rivers and freshwater systems which are global commons under threat from extractive profit-driven development. 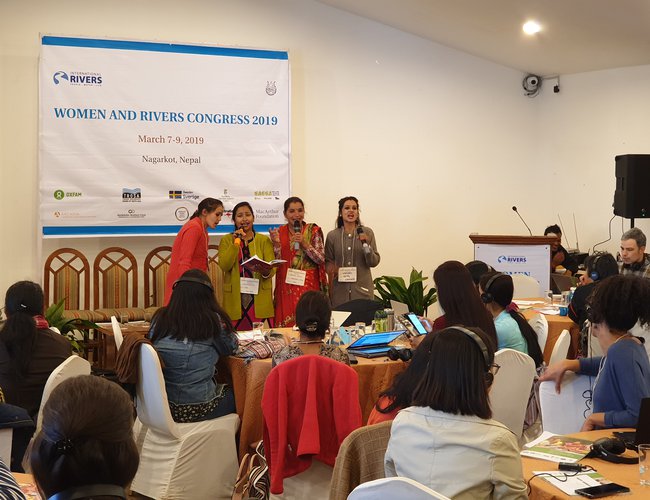 This year's spring allowed me to reflect over and challenge my own ignorance about the feminist movement. As with many for whom March 8 is just one of those days that comes with some noise and then fades away, so it was with me. This year, however, my old organization Nepal Water Conservation Foundation (now run by a younger crop of water activists and experts) co-hosted with International Rivers the first ever Women and Rivers Congress in Nagarkot that saw participation by a hundred women from 32 countries of all continents and all major river basins.

The California-based organization is no stranger to Nepal: in 1993 it had helped the first generation of Nepal's water activists internationalize their case against the World Bank's Arun-3. Its founding chair Phil Williams had been invited to the Himalaya-Ganga conference organized by NWCF in 1993 when the campaign against Arun-3 had just begun. It was not easy convincing him to support our cause for ontological reasons. His first question was: how many people did it displace? Answer: none, it is in a very remote area and no one lives in its vicinity. How much land was submerged? Really not much, as it is a run-of-river project and not a big storage one. What are the main environmental impacts? As a relatively small r-o-r project, not really much, and whatever damage to fish migration dam building does has probably already all been done by the Indian Kosi Barrage downstream.

Phil's blunt question was: then why should we support you? And our equally blunt answer was: because it is an affront to the very notion of development itself and why activist organizations exist at all. The 201MW Arun-3 was being attempted for development by a bevy of donors led by the World Bank at $5400/kW when the going market rate was five times less, and Ethiopia is even today building its Grand Renaissance Dam at $800/kW. Eventually IRN (as it was then called) found out that Arun-3 was the perfect brick with which to hit the World Bank on the head for its very bad economics during the 50 Years Is Enough Campaign.

The Nagarkot Women and Rivers Congress brought together mostly women activists who have earned their spurs battling river-related issues, many from opposing bad dams and mining projects that hurt local communities. As the Nagarkot Statement issued at the end of the Congress puts it, they see themselves as custodians of rivers and freshwater systems which are global commons under threat from extractive profit-driven development. In a world that privileges economic values over ecological, spiritual and customary values, they were gathered to celebrate their shared commitment to safeguard their water and territories from man-made existential threats including climate change. 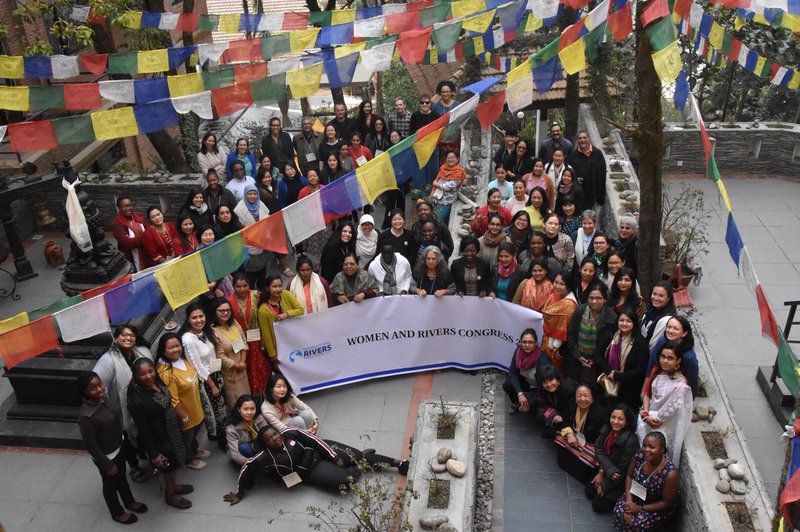 As they shared their rich experiences, what was interesting to me was the broad range of perspectives they had on what constitutes the alternative pathways ahead and the politics of knowledge they could pursue. Indeed, the value of these movements by women lies in the opening of space for an alternative imagining of our common future. While each came with the ethos of their very diverse histories and geographies, what was common was the need to challenge imposed and debilitating stereotypes. For instance, many Asian and African women refused to see themselves as gender experts or even feminists. Africans could not stand that word which did not give due acknowledgement to the history of racial injustice and so preferred the term 'African sisterhood', something that has existed since time immemorial and was severely damaged by colonial practices.

And South Asians saw themselves as professionals and mainstream experts on their own right and not as woman this or woman that to be marginalized with gender tokenism. Indeed, the four men in the entire conference might have been the only feminists around! The Chinese saw the fight for equal women's rights as not very relevant as the Chinese laws gave all its citizens including women equal rights, and it was up to the individual to see if they could live up to it. The problem in China was the relaxing of its One Child policy, allowing families to have two or more children because of the impending demographic squeeze. It is not working too well because professional women find that having more children damages their professional growth prospects. Hence the battle there is now for career growth facilities that would allow women to have more children but not face professional regression as a consequence.

This re-visiting of local feminist movements and their histories is important because it allows us to see where the real steam lies and what can and needs to be achieved. On the occasion of this year's March 8 celebrations, in the sea of verbiage, one Nepali article stood out. It was by Ghamber Nepali and Buddhi Nepali, two researchers in the School of Research and Development writing in Naya Patrika. They start with the problem that arises when translating patriarchy into Nepali (used as the basis of much of the discourse) as 'pitrisatta' instead of 'purushsatta'. The word 'pitri' actually means 'departed ancestors' and thus not quite 'male' domination. They then go on to identify five different types of feminist movements in Nepal.

The first and original Nepali feminist movement was by the ascetic Yogmaya who returned to Nepal from Assam towards the end of the First World War, founded the first women's organization and successfully campaigned for the abolition of sati, or live cremation of widows. She with 68 of her disciples committed mass suicide by jumping into the raging Arun river to protest traditional Hindu discriminatory practices. It remains the mother of all movements. The second is liberal feminism by middle- and upper-class women asking for equal rights and equal representation with men. Satisfied with tokenism, it has compromised with male dominance and diverted the movement away from its political economic challenges.

The third is the Marxist strand that sees liberal feminism as being unable to address the needs of the downtrodden and marginalized women and poses itself as opposed to it. It reached its apogee during the Maoist movement but is taking a backseat as its main votaries seem to be joining the liberal strand. The fourth is led by post-modernists bent on deconstructing the second and the third and finds support among the educated youth. Fifth is extreme feminism which opts for anti-male position and championing the unconventional, including in reproductive matters. The authors think this strand does not enjoy much traction in Nepal, a sentiment expressed by UML politician Usha Kala Rai who thinks anti-male position is counter productive and, with most rights ensured in the 2015 constitution, only the issue of citizenship through the mother is the fight that remains. Another politician, deputy speaker of the Far West Nirmala Badal Joshi makes a similar argument but confesses that even in the new dispensation, patriarchy rules: municipal chiefs just ignore their deputies who are women and take unilateral decisions!

All this points to a rich discourse in the days ahead about what constitutes the feminist movement in Nepal. It is not that any one of the five strands identified above is wholly right but that indeed each one may be partially right, leading to interesting permutations of knowledge, actions and compromises that will be made in the future within these movements. And leading this will have to be what was briefly touched upon at a newly instituted Tribhuvan University course on the Philosophy of Science for PhD students: feminist philosophy. With the rise of the feminist movement in the West as a reaction to the juggernaut of industrialism at the beginning of the 19th Century, feminists began to question the handed-down wisdom from a fresh perspective. Using tools inherited from Western philosophy, they began questioning the foundations of aesthetics, ethics, epistemology and even phenomenology through a gender lens and discovered interesting shortcomings and new interpretive possibilities.

Such a task re-examining these old questions within Eastern (Hindu, Buddhist, Jain, Confucian and Daoist) and Islamic philosophies is a task still waiting to be done. And what that means for understanding water is a challenge the Nagarkot International Women and Rivers Congress has left for the days ahead.