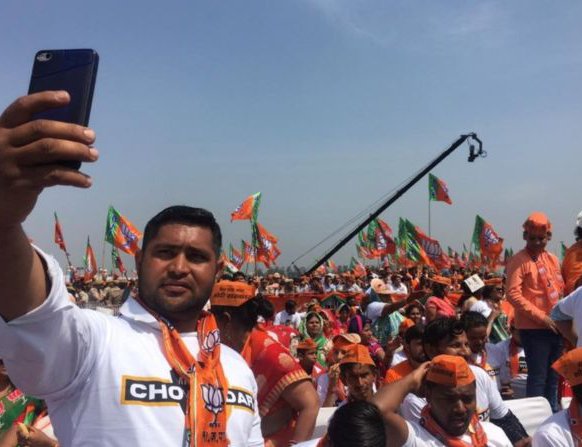 India has entered full election mode: voting is due to begin on 11 April, with the final ballot cast more than five weeks later on 19 May. PM Narendra Modi kicked off his campaign for the upcoming elections with a rally in Meerut, a city in northern Uttar Pradesh state.

After he addressed the crowds there, Mr Modi is to travel to two other rallies - one in Jammu and the other in Uttarakhand.

This is Mr Modi's first big speech this campaign, and it is therefore being watched very closely.

He focused on national security as expected, saying that only his government had the "courage" to carry out air strikes in Pakistan. He was referring to government claims that it hit militant camps inside Pakistani territory after a suicide attack in Indian-administered Kashmir that killed 40 troops last month. 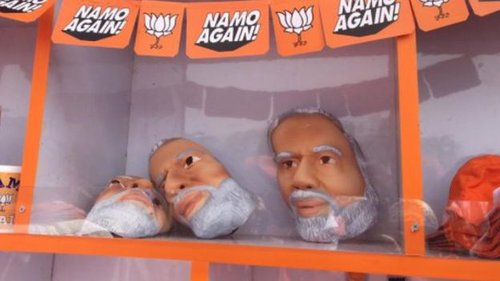 Modi has used the term for a while, telling Indians that he is their "watchman" - someone who looks out for them and serves them.

But in recent weeks, he has really upped the ante, even changing his Twitter handle to "Chowkidar Narendra Modi" - prompting senior members of his cabinet and many supporters to do the same.

Analysts say it is a clever use of the term to address the issue of national security. 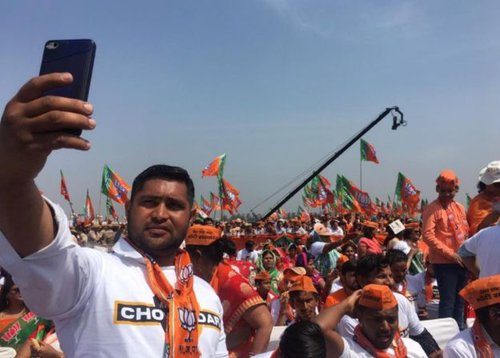 And it appears to have worked since many at the rally could be heard referring to India's relations with Pakistan, national security and "surgical strikes" even before it began, the BBC's Geeta Pandey says.

The crowd at the venue was not massive, but those who have gathered were very excited at the prospect of seeing Mr Modi, our correspondent adds.

They cheered and clapped enthusiastically as they chanted "Modi! Modi!" In his typical style, Mr Modi would start a sentence and the crowd would finish it for him.

"Every time you press the button [for the BJP], you're voting for me," he said as he concluded his speech. Modi has consistently remained his party's main vote-getter.

So will Priyanka actually stand for polls?

Priyanka Gandhi, the sister of main opposition Congress party leader Rahul Gandhi, has said that she will contest in the upcoming election - if her party wants her to.

"If my party wants me to, I will definitely do so," she told reporters in the northern state of Uttar Pradesh.

Her name did not appear in the Congress party's first list of candidates. She had however been listed as one of the party's "star speakers" who would be addressing rallies around the country. 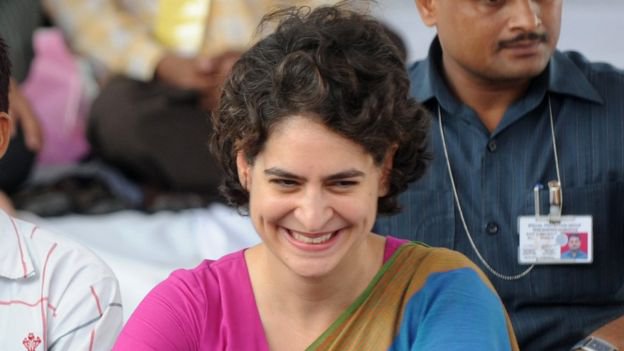 Considered the more charismatic of the Gandhi siblings, she is often likened to her grandmother and former PM Indira Gandhi, which has served to bolster her popularity within the party and beyond.

Party workers who had lobbied hard for a larger role for her were left disappointed she didn't appear on the first candidate list.

This was clearly not what they had envisioned when she announced her "formal entry" into politics in January.

The announcement came soon after the Congress had suffered a blow - the two main regional parties in the politically crucial state of Uttar Pradesh decided to leave it out of a key alliance. So her entry was to ostensibly galvanise demoralised party members.

Therefore to say she was not running gave the impression that her entry was nothing but a half-hearted measure, and that the party was afraid that she could lose.

Which is why her announcement is significant.

It could well be that she may actually run, but even if she doesn't, she is sending a clear message that the party has a plan, and she is abiding by it. But will this be enough to convince workers in the state? 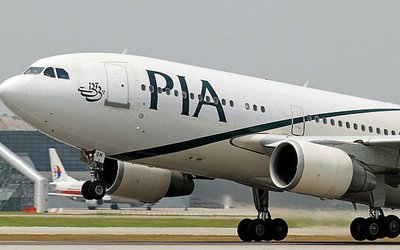 US Revokes Permission For PIA To Operate Flights In US By NEW SPOTLIGHT ONLINE 2 days, 9 hours ago 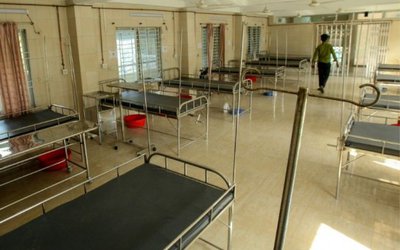 Amnesty International Calls For Pakistan To Protect The Right To Freedom Of Religion And Belief Of Hindu By NEW SPOTLIGHT ONLINE 5 days, 9 hours ago