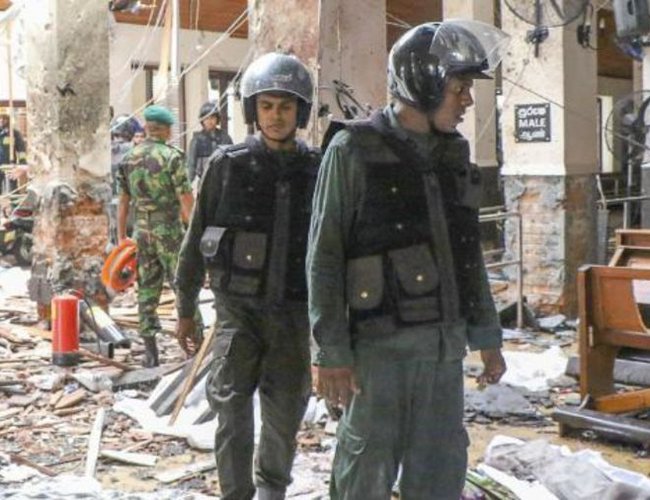 Sri Lanka declared a nationwide curfew after a string of eight explosions, mostly in Colombo, left at over 200 people dead and over 450 injured on Easter Sunday, authorities said.

Xinhua news agency reported that the death toll in the multiple blasts had risen to 185 even as two fresh explosions occurred in two Colombo neighborhoods in the afternoon.

The toll in a series of eight blasts in Sri Lanka on Sunday has risen to at least 207, with over 450 people wounded, police spokesman Ruwan Gunasekera said.

Speaking at a press conference, he said three people had been arrested in connection with the attacks that mostly targeted high-end hotels in the capital and churches where worshippers were attending Easter services.

Gunasekera said the police were investigating whether suicide bombers were involved in all of the blasts.

Sri Lankan officials say the death toll in eight bomb blasts that struck in and just outside of the capital, Colombo, on Easter Sunday has climbed to 190, and that several suspects have been arrested.

"A curfew will be imposed until things settle down," he told reporters in Colombo.

Government officials also said major social media networks and messaging apps, including Face book and WhatsApp, have been blocked inside the country to prevent misinformation and rumors.

Russian President Vladimir Putin has denounced a series of attacks on churches and hotels in Sri Lanka as "cruel and cynical." In a telegram of condolences sent to his Sri Lankan counterpart, the Russian leader said Moscow remains a "reliable partner of Sri Lanka in the fight against international terrorism."

He added that the Russians "share the grief of the relatives of those killed and wish a quick recovery to all those who were wounded" after the Easter Sunday blasts that killed at least 138 people.

Police spokesman Ruwan Gunasekera said the blast hit a hotel in the southern Colombo suburb of Dehiwala. It was the seventh attack to hit the country on Sunday.

Turkish President Recep Tayyip Erdogan has condemned the Easter Sunday attacks in Sri Lanka, calling them "an assault on all of humanity." In comments posted on Twitter, Erdogan offered his condolences to families of the victims and to the people of Sri Lanka.

The United Arab Emirates has condemned the terrorist bombings that targeted churches and hotels in Colombo, Sri Lanka.

Narendra Modi, Indian celebrities condemn Sri Lanka church blasts. Indian Prime Minister also condemned the horrific blasts on Sunday. "There is no place for such barbarism in our region," he posted on Twitter.

The three hotels hit were the Shangri-La Colombo, Kingsbury Hotel and Cinnamon Grand Colombo. It was unclear whether there were any casualties in the hotels. 35 foreigners were among the dead, the officials said.

A hospital source said Americans, British and Dutch citizens were among those killed in the six blasts, which also injured hundreds of people. There were no immediate claims of responsibility for the attacks.

Historic Peace Talks Between The Taliban And The Afghan Government Begins By Agencies 2 weeks, 3 days ago