US Sends Missile System And Ship to Middle East

US Sends Missile System And Ship to Middle East 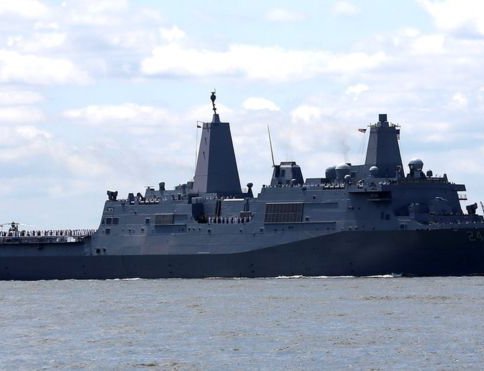 The US is sending a Patriot air defence missile system and a warship to the Middle East amid escalating tensions with Iran.

The USS Arlington, which transports amphibious vehicles and aircraft, will join the USS Abraham Lincoln strike group in the Gulf, officials say.

US B-52 bombers have also arrived at a base in Qatar, the Pentagon said.

It said the moves were a response to threats of possible operations against US forces in the region by Iran.

The US has given little information about the exact nature of the reported threat, which Iran has dismissed as nonsense. Tehran has described the deployments as "psychological warfare" aimed at intimidating the country.

Meanwhile Iran's semi-official Isna news agency quoted a senior Iranian cleric, Yousef Tabatabai-Nejad, as saying that the US military fleet could be "destroyed with one missile".

What has the US said?

On Friday, the Pentagon said that the US did not seek conflict with Iran, but that Washington was "ready to defend US forces and interests in the region".

"The Department of Defense continues to closely monitor the activities of the Iranian regime," it said in a statement.

It added that the Patriot system - which it said could counter ballistic missiles, cruise missiles and advanced aircraft - was also being deployed in the event of any possible attack.

Officials told US media the USS Arlington had already been scheduled to go to the region, but its deployment was brought forward to provide enhanced command and control capabilities.

On Sunday, US National Security Adviser John Bolton said the military deployments would "send a clear and unmistakeable message" to the Iranian regime that any attack on US interests in the region "will be met with unrelenting force".

Uyghur Activist Protests Outside Chinese Embassy In US On Anniversary Of Sister’s Detention In Xinjiang By Agencies 3 days, 9 hours ago

Why Singapore's COVID-19 Death Rate Is The World's Lowest By REUTERS 6 days, 5 hours ago

The Peace Treaties Between The UAE, Bahrain And Israel Are Signed By Agencies 1 week ago

Bahrain Agrees To Normalize Relations With Israel By REUTERS 1 week, 4 days ago