In the midst of these hiccups, government is expected to proceed with the annual works in a ritualistic fashion. Lots of crumbs spreading is likely to be seen in the budget, which is certain to be distributive\populist as there is tremendous demand coming from politicians for inclusion of populist programmes.Growth has to be achieved first then comes the question of who gets it, let us not forget. May the writers of the budget not forget that an opportunity for stable growth backed by strong domestic demand is in the offing? 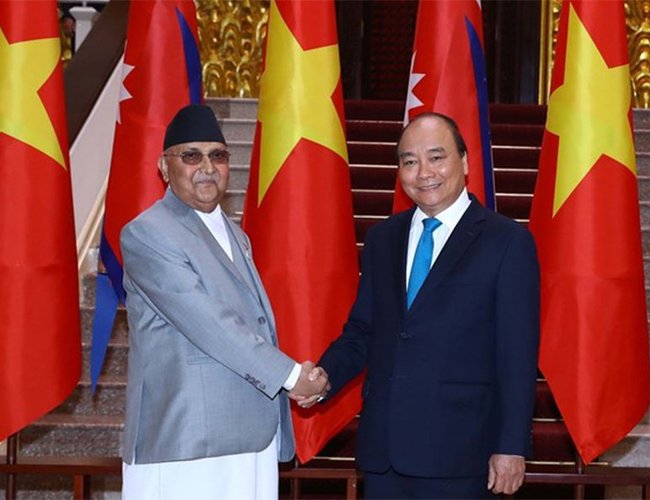 With winter over now, people all over Nepal, probably with the exception of a few warm areas in Madhes, have begun to enjoy the change in climate. Along with the common people, those in the government must have found themselves a bit energized to satisfactorily discharge their responsibility of performing annual rituals, which generally begin with the presentation of policies and programmes for the upcoming fiscal year in the House. The document read by President Bhandari on May 3 contained resolve of the government to foster rapid development in the new fiscal year and make it the year of faster development growth. It also claimed that the year 2018\19 has successfully laid the foundation for the country to achieve higher economic growth in the coming years. In keeping with the past practice, government repeated its commitment to giving high priority to timely completion of projects, especially national pride projects. The government also aims to achieve double digit growth within the next four years. After being almost certain that the wished growth rate of 8 percent is nowhere to be found in the current fiscal year, may be the budget writers for the next fiscal year will have no objection to this a-bit-extended timeline. Everything contained in the document was as usual but President’s repeated use of the phrase ‘my government’ courted controversy and attracted attention of political leaders and civil society members who feel the head of state should not have used the phrase that was exclusively used by kings of Nepal. These comments notwithstanding, current dispensation should be happy that the use of these two words (my government) at least attracted attention of many people to this document, which otherwise would not be considered anything more than the annual ritual work and thus unworthy of paying attention to. Indeed, unlike last time, parties differed vehemently this time around over words found in the policy document and allegedly demeaning language used by Prime Minister Oli in the House. However despite exchange of allegations between parties, obstruction created by the major opposition party and unhappiness of some prominent lawmakers over the use of the two words, the document containing government’s policies and programmes was approved by majority in a chaotic House on May 7. Oli has been justifying the use of the words both within and outside of the Parliament. With the passage of this document, prebudget discussion began and concluded, which will be followed by presentation of the survey covering last fiscal year and thereafter presentation of the budget for the next fiscal year. One noteworthy thing in the recently approved document is that the government needs four years to achieve double digit growth, which is not in conformity with what is stated in the ongoing budget and Oli’s observations made before the policy document that 10 percent growth level would be achieved soon and that Nepal would achieve a much higher growth level not taking too long a time. Let us hope Prime Minister Oli will share with us his views on growth model\ways that Nepal should adopt, after completing his state\study visit to Vietnam and Cambodia.His selection of these two war-torn countries is very appropriate because what has been achieved in these two countries is a glaring example of how nations with economies in a terrible state can progress very fast to ensure their people a reasonable level of living. In our case, it is still not very clear how soon the two-digit growth will be achieved. Government had expected gdp to grow by 9.1 percent in 1976\77 and a year thereafter it will hit 9.5 percent. These gdp figures for different years were based on the estimated growth of different sectors such as agriculture (6.6 percent) and non-agriculture (10.7 percent).Within non-agriculture sector, industry was expected to grow by 14.9 percent and services by 9.4 percent during these years. Probably in view of the unsatisfactory performance related to budget implementation, the concerned tried to play safe giving a different timeline through the policy document for the much publicized double-digit growth. It would be unwise to blame Oli for being over optimistic but one cannot also brush aside the existing ground realities which are far from satisfactory.

With less than three months left for the current fiscal year to be over, capital expenditure of the government stands at 38 percent of the total allocation, indicating sluggish progress in development works. This is indeed contrary to the expectation that the current relatively strong government would expedite development works. Government’s rush to spend the huge sum in the remaining period of the fiscal year could lead to misuse of funds from which emanate questions related to quality of the completed work. Government’s recent decision to raise Rs.86 billion as internal loan has also become controversial especially in view of low capital expenditure and Rs. 130 billion of its money lying idle at the central bank. Let us hope at least the slashed (by 15 percent) capital expenditure of Rs. 262.62 billion is spent properly in the remaining period of this fiscal year.

Very disappointing figures continue to flow on the performance of the external sector, which shows accelerating imports and stagnating exports. According to data made available by the concerned agency, imports totaled Rs. 1061 billion and exports remained at Rs. 71billion in the nine months of this fiscal year. If this imbalance in trade remains unchecked, it could easily hit Rs.1430 billion to surpass the total budgetary outlay. In these months, Nepal imported fossil fuel worth Rs. 182 billion and this agricultural country’s import of food grains such as rice, maize, wheat and millet is on the rise. Nepal’s import of agricultural products is mostly from India. Our agriculture is becoming less attractive and manpower is not available. Trade deficit has surpassed net invisible earnings, further widening the current account deficit which could reach 9.3 percent of gdp in the current fiscal year. Despite a robust growth of remittances and stable oil prices in the past months, current account deficit has widened on account of increased imports of capital and consumer goods and services. Nepal undoubtedly faces the risk of external sector instability on account of increasing trade and current account deficit. Not even an iota hope is seen on the fast-deteriorating external sector because no significant improvement in our production base is seen and the situation outside of Nepal is also not encouraging.

President Trump of the United States has imposed new sanctions on Iranian oil and the waiver granted earlier to countries like India and China to buy Iranian oil for sometimes has been withdrawn and the country in turmoil (Venezuela) is finding it very difficult to sell its oil on the global market mainly on account of US sanctions. Iranian leadership has confessed that International sanctions have begun to create serious problems, which the Islamic Republic had never experienced before, not even during the years of Iran-Iraq war. It may be noted that, after remaining stable for some period, oil prices have begun to rise, which is likely to hurt the economies of great consumers of fossil fuel like India and China and also contribute towards further widening the serious trade gap seen in our economy. Recent deployment of US warship in the Gulf has made the US\Iran relationship tenser and the sabotage attack on oil tankers near the Strait of Hormuz has created additional tension for the oil traders.

Trade row between the two largest economies is far from over and people are apprehensive that it could further worsen in view of the new developments. President Trump has increased tax rate on Chinese goods, requesting Chinese authorities not to raise taxes in retaliation. Chinese, however, have decided to raise tariff from June on 60 billion dollar worth of American goods. China has made it abundantly clear that it is not likely to succumb to the pressure because it is wasting no time in retaliation and is hardening its bargaining position. Even if a trade deal is struck soon, many observers feel that the conflict between the two could continue for long as the two nations are tacitly battling for global supremacy. Continuation of this row for some more time will definitely hurt in a more serious way global output and trade, which could ultimately pave way for global recession. A prolonged conflict between the two great powers is bound to produce disastrous consequences for the entire world. Let us hope the competition between the two countries remains healthy. Let us also be happy that trade talks have not completely broken. Along with this row, BREXIT has continued to shake Europe and is still drawing global attention to issues related to it.Nearly three years of uncertainty since the June 2016 referendum has begun to slow economic growth, discourage investment and damage the reputation of Britain as a paradise for commerce and trade. Steady shifting of jobs and assets by global companies away from Britain to cities in continental Europe has already begun to hurt the country’s reputation as a hub for European Trade. Let us hope Theresa May of Britain gives a new date for exit and succeeds in smoothly moving out of the European Union without letting the situation further deteriorate. Things are not very pleasant in East Asia either because Korean Peninsula looks tense again with the resumption of nuclear activities by North Korea. Missiles are being fired, which is reminiscent of the tense relationship between the US and North Korea prior to commencement of summit level dialogues. It may be noted that after the fruitless talk in Hanoi between the heads of government of the two countries, Mr. Un was seen in Moscow interacting with President Putin. In dealing with North Korea, it now looks that Trump will have to seek cooperation of not only China but that of Russia as well to achieve meaningful result from any effort to be launched in future.

Things are not very normal in our Himalayan country as improvement in weather conditions have increased mobility of people rendered less mobile during the bitter months of winter. Indeed good time is on for annual political activities and will remain so until the onset of monsoon. The major opposition party Nepali Congress has launched a nationwide programme to tell people how this government heading towards authoritarian direction, has failed to deliver the promised goods and that only NC can work for the betterment of people, safeguarding democratic norms and values. Further, despite government’s resolve to crush the Biplab-led Maoist party, the party is very much alive and making its presence felt occasionally. In the midst of these hiccups, government is expected to proceed with the annual works in a ritualistic fashion. Lots of crumbs spreading is likely to be seen in the budget, which is certain to be distributive\populist as there is tremendous demand coming from politicians for inclusion of populist programmes.Growth has to be achieved first then comes the question of who gets it, let us not forget. May the writers of the budget not forget that an opportunity for stable growth backed by strong domestic demand is in the offing?