Artificial Intelligence The Fear of Job Losses – Real or Imaginary?

Now the artificial intelligence (AI), in the fourth industrial revolution (IR4), is enabling machines to perform nearly everything better, cheaper, safer and faster than human beings. 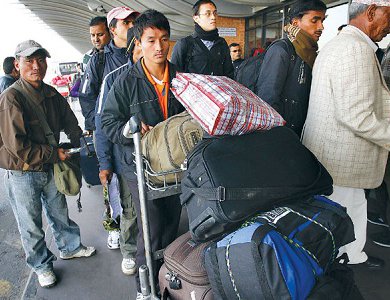 Human beings, by nature, want in life power, pleasure, comfort, and happiness. In these pursuits, humans have invented, refined, and further advanced machines and their applications. In their unfinished search for more and more comfort and happiness, human beings, in the first industrial revolution, innovated the steam engine which helped switch production method from manual to mechanized factory system. Human beings further upgraded the technological innovations by introducing mass production, assembly lines, and electrical grid system etc during the second industrial revolution. The third industrial revolution has given us internet and social media helping us to remain globally connected with people and events (though not necessarily always in promoting harmony).

Now the artificial intelligence (AI), in the fourth industrial revolution (IR4), is enabling machines to perform nearly everything better, cheaper, safer and faster than human beings. Machine is learning to learn by itself without human help making self-corrections along the path of self-improvement - showing flashes of its cognitive power sharper than those of humans. Experts are warning in unison voice that within a short period of a mere few decades or sooner, labour of all collars (blue collar and white) will be reduced to unemployable “useless class”. Potentially no jobs will be safe from AI including high-skill jobs like those of the lawyers, doctors, journalists, and even artists, musicians and painters, not to talk of the muscle labour in the factories. Indeed, future job vacancies may even come with a tag like ‘humans may not need to apply”. There would be a surge in “disemployment”, a state when labour would be considered expensive at any costs, and the need for their services and their jobs would be displaced from the economy never to return in any meaningful way again. This is a much worse situation than unemployment, as unemployed labour faces only a temporary out of job situation. He/she remains employable and is bound to find a job sooner or later. An unemployable labour will not just be out of job, he/she also stands the risk of losing his economic power, self-esteem, confidence, and pride as being a contributing member to the society. The psychological damage will be severe.

Even in the political arena, robot-political-candidate (named Matsuda) has already started robotic debut in the Mayoral elections in Japan (in April 2018) getting 4,000 votes and securing third position in the election vote count. Some recent surveys indicate that about 33% of the German voters would rather prefer efficient and ethically untarnished clean robots as their political candidates over the traditional politicians. (It would be interesting to see the results if similar surveys are carried out in Nepal and other developing countries).

These technological disruptions will have severe global implications in the labour market (due to massive job losses of all skills), in income distribution system because of the winner-take-all method (by big corporations like FANG in the US (Facebook, Apple, Amazon, Netflix, Google) and BAT in China (Baidu, Alibaba, Tencent) swiping all the technological profits to themselves), education system (due to decreasing relevance of what is being taught in the classes), and healthcare system (due to commercial availability of bio-products and genetically-edited products to serve the whims of just a small minority super-rich classes towards youth-prolonging devices, and other similar unusual services).

When one talks about AI, it is really about two factors - data, and the computing capacity of semiconductor chips. Whichever will have commanding lead in these two factors will enjoy commanding domination in AI race. Oil will thus be replaced by data as the most valuable resources in the race for AI leadership. Given the importance of massive data need for AI, FANG and others like them will be making all efforts to collect massive data about human behaviour (with or without) human knowledge to the extent that TVs are likely to be watching the humans and their likes and dislikes of the types of the TV programs than humans watching TVs. Kindle will be reading the readers’ likes and dislikes (in terms of the types of books and articles) than readers reading the Kindle. Same with the Facebook, you tube etc. Humans seem to be willingly and voluntarily submitting all kinds of data about themselves with FANG, BAT in exchange of free email services, and you tube entertainments. It is a transaction heavily skewed in favour of the FANG/BAT (the Big Seven).

Are these perceived global fears being mere myth or are they going to be real? If mere myth, it will be a nice entertaining suspenseful story. If real, how is the world (not just Nepal) going to cope with them? Who will be the gainers and who the losers? Given the importance of data, who will be owning them and who will be regulating and supervising them? What will happen to the society’s foundation, the dwindling middle-income-class, as the issue of income inequality gets ugly? How should the future education system be reformed and updated? How will this impact our current style of work-life balance? Will these disruptions overwhelm our life-style that we are used-to and familiar with? Moreover, will the marginalized massive masses meekly accept the unbridgeable pathological income inequality gap, or will they demand nothing less than the fundamental changes in the very concept of Capitalism? Should there be a serious review of the current intellectual property rights (IPR) system that handover all the technological gains to the Big Seven? Should Capitalism continue its traditional focus only on creation and addition of productive gains? Should not it start giving importance to the distribution of gains as well? Should profit be the be-all and end-all motive behind technological innovations, or should ethical dimension also be given due recognition in the fair share of the gains, and who is going to take this initiative – the individuals, the big corporations, or the Government? The questions are many and serious; the proposed solutions (like the Universal Basic Income (UBI) or the Universal Basic Services (UBS) are few, tentative, and controversial.

At the end of the day, what has to be kept in mind is that future really belongs to them who create their own future and make ethical and “good use” of it. Time has come that technological advancements can no longer be considered as mere scientific discoveries. Their societal, political, ethical and moral dimensions also demand serious consideration before it is too late.

The author is Ph.D. in Economics, East West Center Scholar; Over 27 years of services with the Asian Development Bank (ADB) in various capacities in multiple countries; For the past ten years, research undertaking at the Institute of Southeast Asian Studies, Sinagpore, and currently academic teaching at the National University of Singapore (NUS); Invited keynote speaker in national and international conferences; Several publications, Honours, and Recognitions

Nepalis Are Optimistic:Findings Of SNP 2020 By Dr. Chandra Lal Pandey 3 days, 21 hours ago