The G-7 Group, like a club of kith and kin, loves to hear its own voice in the echo chamber. Hence, instead of being globally inclusive and accommodative to other major economies with it, the G-7 opts to keep them out of it. Meanwhile, it invited India, the Republic of Korea, South Africa and Australia (as its “guests") in its Cornwall meeting. 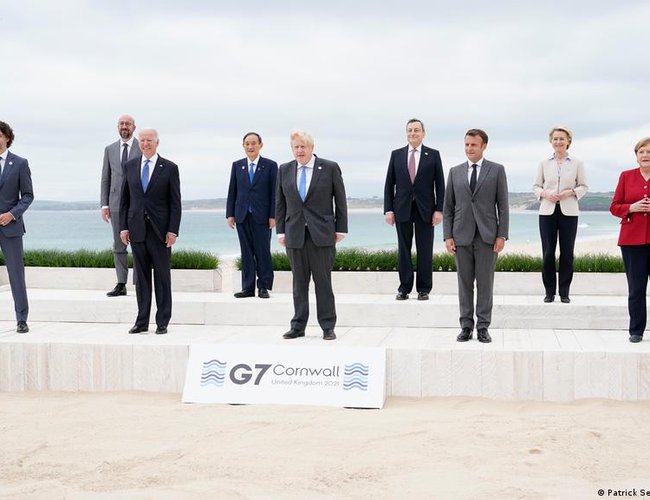 The recent convening of the G-7 meeting in Cornwall, England, reflects the West's nostalgic desire to go back to their glorious past, assuming as though the post-1975 world (when G-7 was formed) continues to remain unchanged. The world has since moved on. It is a grand display of paradox for the G-7 democratic countries, with a mere 11% of the world's population, mostly greying and aging, to act as representing the global order of 7.7 billion population. The G-7 economic might, in terms of world GDP, has fallen to a paltry 33% (adjusted for purchasing power) - compared to over two-thirds of the world GDP during its heydays in the 1970s. Furthermore, there are various issues where the EU interests diverge from the US interests due to their differing evolving contexts and needs e.g. Germany and France. Addressing tomorrow's challenges with yesterday's institutional instruments and architecture is an exercise in futility and reflection of G-7’s obduracy. These institutional infrastructures (built after WW II) now need substantive amendments to reflect today’s realities and thus maintain their continued relevance.

The G-7 Group, like a club of kith and kin, loves to hear its own voice in the echo chamber. Hence, instead of being globally inclusive and accommodative to other major economies with it, the G-7 opts to keep them out of it. Meanwhile, it invited India, the Republic of Korea, South Africa and Australia (as its “guests") in its Cornwall meeting. It becomes perspicuous as though the Group's only intent is to build an anti-China alliance, which if true, is truly unhelpful to the long-term interest of the planet. During such a global pandemic time, the world would have preferred to see the US and China displaying their solidarity. This is the minimum obligation of the leaders of these two countries to the world – certainly not remaining divided and disengaged.

Responding to the Covid-19 pandemic, the G-7’s "pledge", in its final meeting, of providing less than one billion doses is woefully below the WHO’s figure of 11 billion doses (WHO’s estimated figure for the World’s poor nations). The “pledge” was neither country-by-country commitment, nor even bound by any timeline, and is spread over the next year. It is like aiming to reach the moon in a bullock cart. Also, it is to be noted that a "pledge" is merely an expression of non-binding intention.

Meanwhile, the Covid casualties continue to ascend. The casualties have already exceeded 4 million with no sign of deceleration. Thus, the urgent need of the day is to find a global resolution with collaboration among the US, China, India, Russia, and other vaccine-producing countries rather than engaging in a game of seeking the original sources of the virus first. When the house is already on fire, the urgent task is to seek the water to put off the fire than finding out what caused the fire. (There will always be adequate time to find out the virus sources once the pandemic is brought under control). In this pandemic, no country can feel safe until all countries are made safe. Thus, it is unethical for some G-7countries to keep,in-store,globally scarce vaccines while so many low-and-middle-income countries (LMICs) suffer daily casualties due to the shortage of the same vaccines. Releasing those vaccines by these countries to the rest of the world (before their shelf life expires), is not only ethical but also prudent as it serves their own self-interest. These developed countries need to raise their sight beyond their own region.

The G-7 nations’ refusal to acknowledge the vaccines as a global public good is hurting their own image. Their insistence on retaining the IPR on the vaccine (to serve the corporate greed of a few vaccine manufacturers) during such a crisis period (even in defiance of US President Biden’s desire), is simply inexplicable. This underscores that the current IPR regime, which grants an increasingly longer period of protection for every incremental innovation, has outlived its usefulness. A new IPR regime is long overdue. Under the current IPR regime, the risk of stepping in the legal minefields, due to unintentional violation of IPR, is hindering the budding creativities in many countries. Given this, a new IPR regime, reflecting the world economy’s new realities, needs to be developed by G-20 in replacement of the current IPR regime.

It is about time for the G-7 to acknowledge that, in its current form,it has outlived its usefulness. Messrs Jim O’Neill and Alessio, both Fellows at the European Research Institute Bruegel, correctly pointed out (soon after the Cornwell G-7 meeting), that the G-7, “in its current formulation, no longer has a reason to exist, and it should be replaced with a more representative group of countries”. (See Council on Foreign Relations – “Where is the G-7 Headed?”, 14 June 2021).

With the ready availability of G-20 as an alternative institutional mechanism, it is only sensible for the G-7 to consider merging itself with the G-20. Interestingly, such a merger could be a strategic masterstroke for the G-7 to transform itself as a diverse club of G-7-20. Even after the merger, the G-7 nations will still remain intact with its significant influence over the global agenda except now, it will be perceived as representing two-thirds of the world population from all the continents, 80% of the world trade, and 84% of the world GDP. Its legitimacy will be enhanced, and it will be seen as being more inclusive and representative of global needs and concerns. This will also be in line with the suggestion made by Richard Haas, President, Council on Foreign Relations (CFR), and Charles A. Copchan, its Senior Fellow –the need for a “new concert of powers” of the US, China, the EU, India, Japan, Russia and other important economies, genuinely representing the global community. As often said, nothing can stop the force of an idea whose time has come. The reincarnated form of G-7 as G-7-20 could just be one such idea.

Dr. Shrestha can be reached at Omkar.shrestha@gmail.com