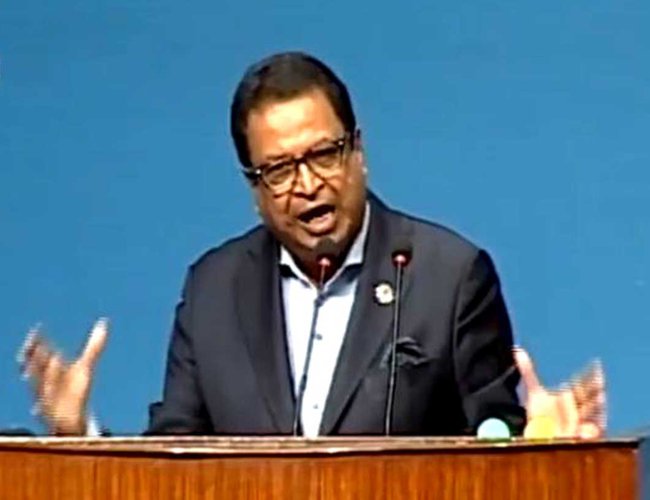 As per the new constitution, this government has presented its budget first time after elections with two third majority. The government defines the current fiscal year as a base year for prosperity. Brought within this periphery, the fiscal year 2076/77, second budget, sets three targets. Those include livelihood of people, economic growth and to make Nepal a middle income economy by 2030. However, if one can analyze the budget, it seems that the budget talks many big things missing road to a long term development targets.

There need to bring fundamental changes in the face of current Budget to accelerate the pace of development campaign process of making Nepal prosperous. Budget should be development centric. But our budget is concurrent expenditure centric. The budget should limit 60 percent for capital expenditure and 40 percent for concurrent expenditure. Our budget is exactly opposite. Out of total Rs.1532 billion budget, Rs. 957 billion (62.4 percent is allocated to concurrent and only Rs.459 billion (26.6 percent) is allocated to capital expenditure. We cannot push country to speedy development from this kind of reverse budget.

Due to use of technology, other governments become more efficient and small. But, our government is swelling. Central, province and local governments need to spend huge amount of money for salary and other benefits. We should have think to downsize the government but we are yet to think about it. There is a risk that the revenue cannot meet concurrent salary and benefits and government has to take foreign aid for this. To meet the growing expenditure, the government increases the tax. To increase revenue, the government is encouraging import. Nepal is turning as a country with highest tax rate in the world. Looking at these trend, there is a high risk before the economy. The intention of state seems to added additional taxes to existing tax payer rather than expanding the basement of tax.

Nepal need to move following the change in global economy. The word has entered into Digital Economy. There need a huge investment in information and technological sector.

Lets Start From Ourselves

For the modernization of economy, the issue like Payment Gateway, Digital Economy and exercise of Paperless government is not just an issue of preaching. Government offices, parliament, department under the ministries need to show exemplary role. We need to look to our face in mirror where we are? How much the budget can contribute and help in those issues. This is a time to think seriously. I am very much disappointed in this matter.

Wish for Self Reliant Economy

Our industrial production has been declining. We are not in a position to achieve the progress through small corrective measures. Our economy is expecting new strategy to take off. We can make Nepal international hub for education and health sector. For this, we need to give up our narrow thinking and follow liberal policy. We need to march ahead in education and health sector collaborating with internationally renowned institutions. The government need to play the role of facilitator. The government has to collaborate for necessary infrastructures, human resources and technology.

To achieve government's development target and implement them, there need to have conducive environment. The government need to enhance the capability of national industry to compete with Indian and Chinese products. Otherwise, many things written in the budget will just confine to budget book.

The growing apathy and hate of young generation to the government and nation is the result of country's failure to do some visible works for them. There is an education but there is no skill as per the qualification and no employment as per the skills. Young generation are compelled to leave the houses for employment.

Since decades, Nepal has been presenting programs to generate employment in home. We have implemented youth employment fund concept a decade ago. There should have results giving employment to tens of thousands of youth. However, the fund has confessed that that its programs are ineffective. Again the current budget expresses that there will be structural changes in National Youth Council and fund to make them effective.

There is also a provision to start Prime Minister Employment Program to generate employment and prevent youths going abroad. The government apportions 31 million for this. Provision 67 of the current budget also says that to implement Prime Minister Employment Program effectively, unemployed registered with employment information center will be mobilized in development activities. The budget has allocated Rs. 5.1 billion for this.

If this amount is used to generate the employment in productive sector, it will generate sustainable employment opportunity. But this budget's policy is directed to fulfill temporary results not for long term results.

The implementation of speedy and sustainable development and promotion of more investment will be a way out to solve unemployment problem. For this, there need to boost the moral all of investors.

Each budget brings new thinking to reduce the trade deficit. However, the annual trade deficits is growing. During the fiscal year 070/71, our annul export was 91 billion in 074/75, the export has declined to Rs.81 billion.

Tourism development is an important sector for overall development. However, we are unable to improve the situation at Tribhuwn International Airport. Improvement of TIA will be prerequisite for tourism promotion and development. There need to hand over the management of TIA to internally renowned group or companies. There also need to improve the stat of domestic airport. There should have one tourism destination in each province. There need to operation the airport at Taplejung to provide alternative to North Bengal and Sikkim. There need to stress for quality tourism.

Instead of establishing new smart city, it is better to make establish city as smart city. Look at Kathmandu, it turns into a pond after rain. There are wire hanging all over. We are unable to manage the sewerage and the road are made hole just a few days after improvement. Lets start on this side of smart city. Lets make mayor powerful and responsible for city management.

We have been importing vegetables, flowers and fruits from India. Prime Minister Agriculture Modernization Program should address this problem. Practically speaking, our poor farmers are competing with Indian farmers who receive heavy subsidy from government. The situation is that imported rice and vegetables are more cheaper than our own product. We need to liberalize to give cash subsidy to farmers.

To use the strong side of private sector, the budget need to build adequate and honest basis. Instead of concentrating on power generation, the government needs to give priority to the construction of new transmission line. There do not have enough project. As expressed in the budget, there need to change the attitude to look private sector.

How long does it take to pass Naubise to Nagdhunga? How many times we have expressed commitment to improve the road? Forget about big projects, it has been taking years to complete small projects. The main thing right now is to assure that infrastructures project will complete in schedule period.