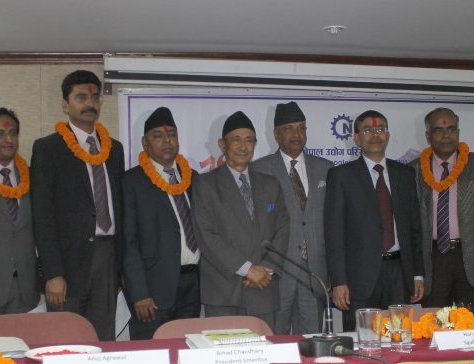 While I was addressing the 13th convention of the Confederation of Nepalese Industries (CNI), my mind was hounded by our 12 years of difficult journey to establish the CNI as an effective institution. I have seen a strong unity among the private sector community members to sketch a clear picture of Nepal’s economic prosperity. A conducive environment has been created for a close partnership between the private and public sectors. From preparation to implementation of Nepal’s economic and social development policy, public and private sectors stand side by side. As the private sector makes a 70 percent contribution in the Nepalese economy, we are now not only talking about our own community, but we are worried about the country’s economic state. I would like to thank our colleague from the private sector for this thinking. We need to expand it further.

We are passing through a special time with the promulgation of the new constitution by the Constituent Assembly. This is the dream which was pending for 65 years. The new constitution institutionalized our political agenda and now the time is for economic development and prosperity. I would like to extend my gratitude to the prime minister for his successful India visit. After the visit of prime minister, the situation has been normalized and all the hurdles have been removed. However, the supply of petroleum products is yet to normalize and private sector is still facing difficulties.

Earlier, we were hit by earthquakes and the disruption in supply has badly shaken the foundation of economy. It is a positive step of the government to announce 1 billion rupees Revival Fund. Affected parties should have easy access to the fund without any administrative hindrance.

I have a clear opinion that Nepal can achieve faster economic growth working closer with both the neighbors. Chinese investment and technology and Indian market are important sources and means for Nepal. China has established now as one of the competitive destinations for investors in terms of technology and investment. We need to use this important capability available in our neighborhood for water resources and infrastructure development.  However, we don’t have any alternative to Indian market. Nepal needs to take advantage of growing India-China economic partnership. As Nepal geographically lies between these two, Nepal can be an effective bridge for them. We need to do so not only on words but the need is to translate it into reality. Private sector is ready to support the government and work on partnership basis. Thus, what I do see that Nepal can make benefits working together with both the neighbors rather than projecting each other as alternatives. Not only at the government level, there also is the need to establish deep relations with private sector in both the countries. It has strategic importance for expansion of investment and promotion of Nepalese products.

Although we have been talking about the need to have joint cooperation, we are unable to establish special economic zones in border areas. In this context, I would like to remind you the study report presented by CNI to the government. We had prepared the report following an intensive study on the special economic zones of both the countries. We are unaware where our recommendation is now.  However, I have been reading newspaper reports that special economic zones are not in use even after their completion.

Now we are in the efforts to provide relief to people from two crises. The first is April 25th Earthquake and second is related to management of provincial issues following the promulgation of new constitution. Crises are our destiny. The question is: are we able to show the capability to manage the crises? There comes some crisis in every country’s life. Many countries around the world have gone through it. The main question is whether we are able to find the solution of such crisis or not and whether we can manage such crisis in case of repetition. Earthquake and economic disruptions were two real catastrophes for Nepalese economy as international multilateral donors have already projected that Nepal’s economic growth will shrink to 1 percent this year. This is an unfortunate situation for Nepalese economy. I see this projection as bad national situation faced by industrialist like me. This is the time for government to encourage industrialists so that they cannot think for alternatives. I am hopeful that the government will achieve the target set by National Energy Crisis Reduction and Electricity Development Decade (2016-2026). It will end the current power outage within three years and develop the hydropower sector. I want to express full commitment from the private sector.

We are encouraged by Indian government’s message to implement the Pancheshwar Project. This project needs to be implemented immediately. The implementation of project will expand investment, generate employment and provide uninterrupted electricity to industries. This will transform Nepal’s face. I would like to draw the attention of private sector to use the recent decision taken by the United States of America to provide duty free access to Nepalese garments. This will be one of the effective ways to improve our economy. The government needs to take immediate steps to create a conducive environment. With the coordination between the government and private sector, we need to work together. Delayed reconstruction campaign has made the earthquake victims to bear the burden. However, National Reconstruction Authority has already launched the reconstruction campaign now. I would like to draw the attention of concerned authorities about the role played by private sector, donors and civil society organizations in early days.  I hope the authority will not spare any time to mobilize these sectors which had made positive contribution.s

(Chaudhary is President Emeritus of Confederation of Nepalese Industries. Excerpts of the Statement delivered at CNI’s Thirteenth General Convention.)

Employment Impact From The Pandemic Worse Than Expected: ILO By NEW SPOTLIGHT ONLINE 7 hours, 23 minutes ago

Flood Damages The Paddy Worth Of Over Rs. Billion In Nepal By Agencies 4 days, 7 hours ago