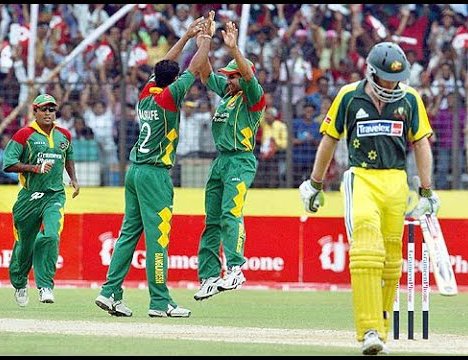 David Warner's accomplished 166 was the bedrock for a 48-run win that took holders Australia top of the World Cup table and damaged Bangladesh's chances of making the semi-finals.

Warner found some explosive form late on to push Australia to their second-highest World Cup score of 381-5.

Bangladesh chased gamely but could not kick on in the closing stages.

The four semi-finalists look set already - with 19 matches of the group stage still to play.

Australia look likely to be joined in the last four by hosts England, India and New Zealand, although fifth-placed Bangladesh will hope to take advantage of any slip-ups.

Warner now has scored two centuries in eight days - a fine return after serving a year-long ban for ball tampering - and becomes the first player in World Cup history to pass 150 twice.

Bangladesh, set a World Cup record target to chase, saw Mushfiqur Rahim bring up his 100 in the penultimate over as the two teams amassed the most runs in a men's World Cup game.

The scorecard accurately suggests an ultimately comfortable win for holders Australia - but they may yet have to up their game, and their scoring rate, in the knockout stage.

They were steady in laying the foundations for their mammoth score, picking up just 53 runs in the first 10 overs and taking 164 balls to score their opening 150 runs on the batting-friendly pitch that saw England score their world record 481 last year.

After captain Aaron Finch was out in tame fashion, steering a ball to short third man, Usman Khawaja joined Warner at the crease. The pair combined for a huge partnership of 192, but both players were in cautious mood for the bulk of their innings, with fans and former players alike questioning their intent.

Australia legend Shane Warne criticised their "conservative approach" and said that their late-innings acceleration came 20 overs too late, while former England captain Michael Vaughan believes Steve Smith should be batting at number three ahead of Khawaja.

There were signs of Warner's old flair, who switch-hit a four and then opened up once he passed the 100 mark from 110 balls, eventually pummelling five sixes as he moved level with all-time great Adam Gilchrist on 16 ODI hundreds for Australia. 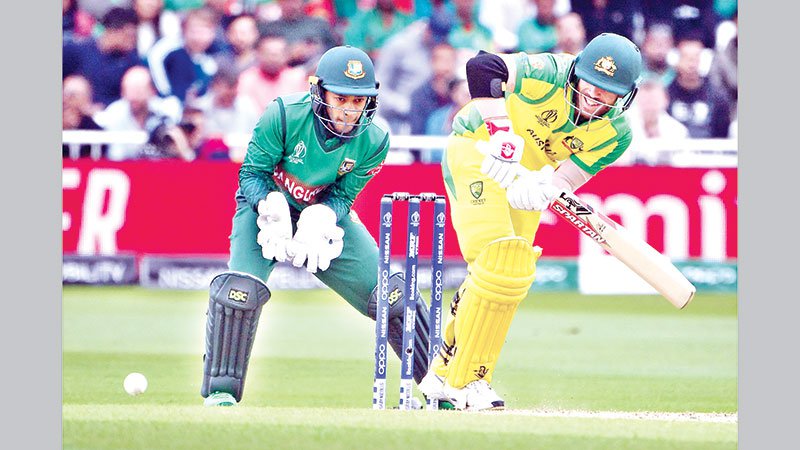 By contrast, Warner now boasts the two highest World Cup scores for Australia, adding to his knock of 178 against Afghanistan four years ago, but has also scored two of the four slowest hundreds in this year's tournament.

Australia went from 300 to 350 in just 17 balls as Warner was replaced by Glenn Maxwell, who powered to a decisive 32 off just 10 deliveries and looked set to take Australia to an even bigger total before he was run-out by Khawaja's reluctance to take on a quick single.

They paced their innings well in the end, scoring 173 from the last 15 overs, a total only bettered so far by England against Afghanistan, and also hitting Rubel Hossain's 46th over of the day for 25 runs - the most in a single over at the World Cup so far.

Roared on by a passionate support, Bangladesh set off on their record pursuit in confident mood. After all, the Tigers have accomplished two of the top three run-chases in World Cup history.

The underdogs were always in touch but lost key wickets at key times to derail their hopes on a good batting wicket.

Mahmudullah's late surge of sixes raised hopes of a historic victory but he was eventually caught at deep mid-wicket trying to hoist another shot into the crowd.

Ultimately it was a failure to match that Australian flurry of runs late on which proved the difference, as Bangladesh were ahead of the required rate at 30 overs but needed 14 an over by the 40-over mark.

Shakib Al Hasan, in great form in this tournament, was in the running for a third successive hundred but was deceived by a slower ball and caught by Warner on 41, silencing Trent Bridge.

Their eventual total of 333 surpasses the highest run chase at a World Cup and is one short of the highest second-innings total in defeat - posted by England against Pakistan earlier this month.