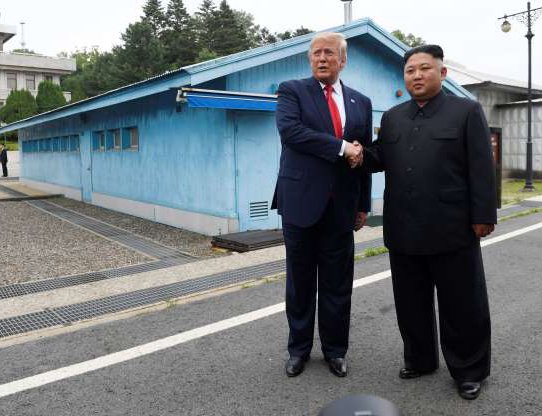 Donald Trump made history on Sunday by becoming the first sitting US president to step into North Korea when he greeted Kim Jong-un with a handshake in a bold diplomatic move to kickstart stalled talks to dismantle his nuclear weapons programme.

The two leaders greeted each other warmly shortly before 4pm at the military demarcation line (MDL) in the joint security area that separates North and South Korea.

Mr Trump stepped first across the line, walking for several steps into the North, shoulder by shoulder with Kim. The men then turned back and Kim reciprocated the gesture, walking into the South to waiting reporters.

The smiling North Korean leader described the moment as holding “a lot of significance”, as a “courageous and determined act” as they tried to “put an end to an unpleasant past.”

Mr Trump added: “a lot of really positive things are happening,” telling reporters that “we met and liked each other from day one and that was very important.”

As the leaders retired for a more private conversation, the US leader extended an invite to Kim to visit the White House.

Mr Trump and Kim met privately on the south side of the border for about 50 minutes, emerging again shortly before 5pm, when the president accompanied the North Korean leader back to the MDL.

He told reporters that the meeting had been a “very good one, very strong, very solid” and that they had decided to set up teams at a working level to try to move talks forward.

“We want to see if we can do a really comprehensive good deal,” said Mr Trump, although he stressed that speed was not the object.

“Nobody knows how things turn out but certainly this was a great day, a very legendary, very historic day. It was quick notice. Nobody saw this coming. It was great that he [Kim] was able to react so quickly,” he said.

“In speaking with President Moon he was saying often times that this was historic, just the meeting was historic and I think there’s something to that. It’ll be even more historic if something comes of it, something important,” he said.

The remarkable diplomatic spectacle had only been confirmed a few hours earlier when South Korean President Moon Jae-in said Mr Kim had accepted the US president's invitation to meet when he visits the heavily fortified site at the Korean border village of Panmunjom.

"The leaders of the US and North Korea will have a handshake for peace standing at Panmunjom, the symbol of division," Mr Moon said, referring to the "truce village" in the DMZ.

Analysts described the risky move as grand political theatre that could reset relations between the US and North Korea after months of stalemate over Pyongyang’s nuclear weapons programme, but cautioned it would not significantly move the needle in terms of the disarmament process.

Trump himself tempered expectations ahead of his brief meeting with Kim at the truce village of Panmunjom, located in the 2.5-mile buffer zone between North and South Korea known as the demilitarised zone (DMZ).

“It’s just a step. It might be an important step and it might not, but what we are doing today is a step and probably it’s a step in the right direction,” he told a press conference.

The president, who first publicly extended his invitation to Kim on Saturday on Twitter, casting it as a “quick hello” rather than a full summit, insisted the North Korean leader had “wanted to do it from the beginning.”

He said: “I do believe he understands me and I think I understand him. Sometimes that can lead to very good things.”

Mr Trump departed Seoul by helicopter shortly after the announcement.

Moon Jae-in, the South Korean president, who was accompanying Mr Trump to the DMZ, said he was “overwhelmed with emotion” at the decision of “two courageous leaders” to meet on the world’s most heavily fortified border.

“I hope President Trump will go down in history as the president who achieved peace on the Korean Peninsula,” he said.

The brief encounter is the third meeting between the two leaders over the past year.

The meeting comes after the US president used Twitter to invite Kim to a third diplomatic date after their first two encounters in Singapore and Hanoi.

Mr Trump and Kim have been unable to strike a deal in which North Korea dismantles its nuclear weapons facilities in exchange for reductions of tough sanctions that have stymied its economy.

Their first meeting last year took place in a blaze of publicity, the first-ever encounter between a leader of the nuclear-armed North and a sitting US president, whose forces and their allies fought each other to a stalemate in the 1950-53 Korean War.

However, time is running out to reach a denuclearisation agreement that would be acceptable to both sides ahead of an end-of-year deadline set by the North Korean leader.

On Sunday Mr Trump said that despite the “chemistry” he had with Kim that he was in “no rush” to resolve the deadlock. “Let’s see what happens but I’m in no rush. Sanctions are still on…if you rush you get yourself in trouble.”

“Offering a purely optical meeting to Kim Jong Un, without raising expectations for specific deliverables, helps reinforce a narrative of the United States acting in good faith to advance diplomacy. And it may expand Kim's domestic space to engage U.S,” said Mintaro Oba, a former US state department official.

However, the gesture of inviting Kim to the border was earlier described by Robert Kelly, a political science professor at Pusan university, as a “clown show.”

He tweeted: “Trump’s offer to meet Kim Jong Un at the DMZ is emblematic of why the Trump NK effort is a farce: thrown-together; last-minute; made-for-TV; driven by [Trump’s] lust for optics & drama (of the DMZ) rather than substance; in pursuit of a photo-op for the 2020 election.”

"Trump and Kim can claim this is at least some degree of follow up on part of the Singapore agenda," he said.

He added that if Mr Trump crossed the Military Demarcation Line, it would fulfill "a longstanding North Korean goal of getting a sitting US president on their soil".

Melissa Hanham, a defence expert at One Earth Future, said it would suit both sides.

"This photo op will give Kim Jong-un legitimacy in the eyes of his people and the world. It will demonstrate that nuclear weapons turn a pariah into a force to negotiate with," she said. "It will get the Trump some photos for tomorrow’s news."

Trump Acquitted Of All Charges In Senate Impeachment Trial By NEW SPOTLIGHT ONLINE 1 week, 3 days ago

A Coronavirus Upsurge Could Be Devastating For South Asia By NEW SPOTLIGHT ONLINE 1 week, 5 days ago