Any Discussion On Kashmir Will Only Be With Pakistan And Bilateral: Jaishankar to US

Any Discussion On Kashmir Will Only Be With Pakistan And Bilateral: Jaishankar to US 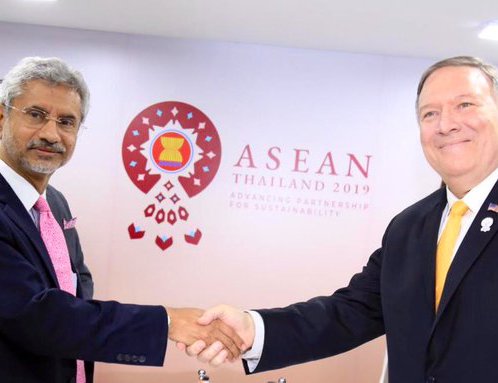 Foreign minister S Jaishankar on Friday said he has conveyed to the US in clear terms that any talks to resolve the Kashmir dispute can only be held between India and Pakistan and will not invite third-party mediation.

“Have conveyed to American counterpart @SecPompeo this morning in clear terms that any discussion on Kashmir, if at all warranted, will only be with Pakistan and only bilaterally," Jaishankar said in a post on Twitter.

“Wide ranging discussions with @SecPompeo on regional issues," Jaishankar said in another post, along with a picture of the two shaking hands on the sidelines of the margins of a Southeast Asian foreign ministerial conclave in Bangkok

Jaishankar’s comments follow the controversy last month which erupted after US President Donald Trump said Prime Minister Narendra Modi had sought his mediation in the Kashmir dispute with Pakistan, something the Indian foreign ministry and the US state department later denied.

The Indian foreign minister and the US Secretary of State Michael Pompeo’s meeting in Bangkok was the second between the two, with both of them having last met in June in New Delhi.

Last week, Indian foreign ministry spokesman Raveesh Kumar said New Delhi wanted to “move on" from the controversy created by Trump on the issue of mediation in the Kashmir dispute.

Trump had said Modi, during a meeting in Osaka on the sidelines of the G20 summit, had sought US mediation or arbitration in the Kashmir dispute. The fact that Trump had made the offer in public was seen as a major departure from the US’s established stand of viewing the Kashmir dispute as a bilateral issue to dealt with by India and Pakistan.

“I thought we had moved on and, frankly, I think we should move on," foreign ministry spokesman Raveesh Kumar told reporters on 25 July, three days after Trump made the stunning proposal during a visit by Pakistan Prime Minister Imran Khan to the White House. Kumar had reiterated that Jaishankar and the US state department had clarified that Modi did not seek any mediation.

Bangladesh To Give Duty Free Access To 16 More Bhutanese Products By Agencies 3 weeks, 1 day ago