Rivers and streams in the plain areas have experienced high rate of bed rise due to sediments, stones, gravels and boulders (in foothills). Our geology permits degradation, aggradation and sedimentation as a natural process 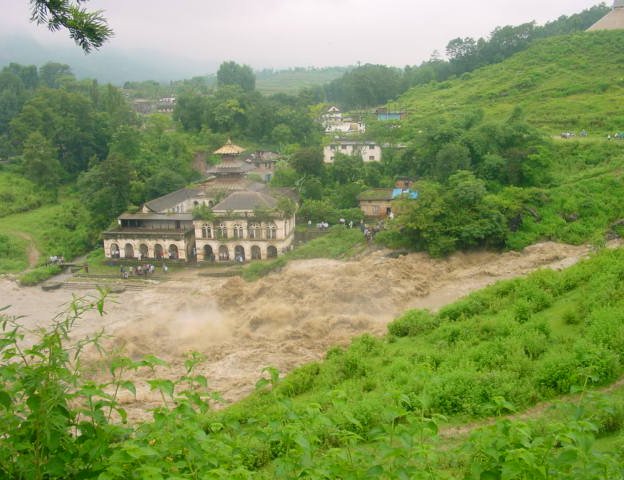 Anthropogenic activities have increased the menace of soil erosion, landslides, flood and sedimentation in Nepal. Nepal's fragile geology has experienced each year soil erosion and landslides in the mountains and hills, particularly during the monsoon season. Similarly, degradation in the uplands has increased sedimentation and flooding in the valleys and flat plains. Erosion and landslides have been aggravated due to unwanted human activities in the hills thereby posing continuous threat in the flat lands due to river bed rise and accelerated flooding. It has increased the loss of lives and properties. Dozer-used road construction has replaced the 'green road concept' in the recent years. Road development is inducing landslides, accidents and 'death'. East-west and north-south roads have also blocked free-flow of water, to some extent, in the plains.

It is the general understanding that India has constructed east-west road (of greater height), embankments and 'gated' bridges, including lack of or inadequate 'water exit points' in many parts in its northern border. These activities have blocked natural flow of water from Nepal to India, and accelerated 'back water flow' and inundation in the Nepalese land. Many people consider it 'unilateral intervention of India' in the border area which has made Nepali people at risk, 'environmental refugees' in their birthplace from continuous problem of inundation each year in its open border.

Engineers and technocrats 'blame' to outdated 'embankment technologies' and believe the severity of the challenges associated with inappropriate use of technologies, while politicians recall recurrence of loss of people and property, and damage of infrastructure due to 'inundation havoc'. In any case, poor people of Nepal and India suffer more from such activities. People with small landholding and lack of alternative livelihood are either flooded or are the regular victims of flooding.

Monsoon season has just started. Water source is yet to sprout. People still wait for stone taps and wells. However, concentrated and localized rainfall has damaged infrastructures, and challenged life and property. This year in July 2019, Balkhu area in Kathmandu experienced inundation. Rivers and streams have yet to find their natural ways. Many people forget high rate of riverside encroachment and narrowing of river/stream channel without considering the watershed areas. Previous water retention areas are also converted into 'concretes' in urban areas.

Rivers and streams in the plain areas have experienced high rate of bed rise due to sediments, stones, gravels and boulders (in foothills). Our geology permits degradation, aggradation and sedimentation as a natural process. However, degradation in the hills has accelerated aggradation in the Terai. Sediment deposition is greater than the capacity of the river/stream to transport. Furthermore, roads, irrigation canals and other infrastructures have also contributed to increase river/stream bed and sediment deposition in the fertile farm land. Water finds its own way to flow from the upland to the lowland. If there is more water, human interventions might not work as desired or planned.

Extreme precipitation trend in the last 44 years (1971-2014) has confirmed that number of rainy days is increasing in north-western districts. Very wet days and extremely wet days are decreasing significantly, mainly in the northern districts. Data indicates that daily extreme precipitation is higher over Terai and Churiya region exceeding 400mm/day. Duration of monsoon is increasing half-day/year (5 days in 10 years). However, many parts of the country are experiencing 'localised' and higher amount of rain. Infrastructures and 'concretes' have accelerated surface runoff. Climate-induced irregularities and seasonal changes in climate system are experienced in the recent years. Increase in population, 'centralised' social service facilities, rural-urban migration, unregulated sand and gravel extraction, and 'concrete jungles' might have 'blocked' the water channel and accelerated inundation. This might continue till sustainable development concept is grounded in implementation.

Nepal Forum of Environmental Journalists (NEFEJ) organised a programme on 26 July 2019 in Kathmandu to discuss on dams, inundation and solutions in Nepal-India border areas. Facilitated by Mr. Kosmos Bishwakarm, NEFEJ President, the programme was addressed by Messrs. Pradip Thapa (DDG, Department of Irrigation), Deep Kumar Upadhyay (Former Nepali Ambassador to India), Dipak Gyawali (Former Minister), and Hon'ble Pradeep K. Gyawali (Minister for Foreign Affairs). Speakers shared their opinions, concerns and reflections on dams and impacts, diplomatic efforts in addressing the challenges, and institutional responsibilities in reducing damages from dams, roads and floods along Nepal-India border. Nature does not know the international boundary and infrastructures across the border has greatly affected human life, land and property in Nepal.

With the moral responsibility for protecting people of both countries from floods and inundations, speakers highlighted, inter alia, the urgency for further realising natural water flow and historical realities in utilising water resources, advancing multipurpose use of water, addressing climate-induced disasters, mobilising joint-efforts and using evidence-based technologies to construct infrastructures and find solutions to address common problems. Emphasis was also given to manage flood with multi-pronged approach, and strengthen people-to-people relation through early warning system to benefit people of both countries. Suggestions were also made to best utilise the existing institutions such as Water and Energy Commission Secretariat, avoid dozer-development in the hills and inappropriate 'embankment' technologies. Speakers also advised to raise issues at diplomatic and political levels.

Blaming to each other does not solve the problem. Nepal may wish to appropriately engage subject specialists to identify ground realities, population growth and infrastructures, rate of river/streambed rise, causes and consequences of dams and inundations, generate evidences on inter-relationships and inter-dependences between uplands and lowlands including upland conservation models and lowlands' infrastructure development initiatives. This should equally consider climate-induced disasters along with future development potentialities including highway and airport. Furthermore, Nepal may wish to avoid or minimise riverbank encroachment, and advance 'regulated use of sand and gravels' of the riverbeds to maintain natural flow of water. Dredging may also work to bring back the river/streambed to its 'near-to-original' stage which might provide construction materials as well. Joint-efforts are required at technical, diplomatic and political levels to save 'poor people' from such continued inundations.

Condition Of Public Transport In Nepal By Reezan Poudel 1 week, 3 days ago

Nepal In CoP26: Commitments And Funding By Batu Uprety 2 weeks, 5 days ago