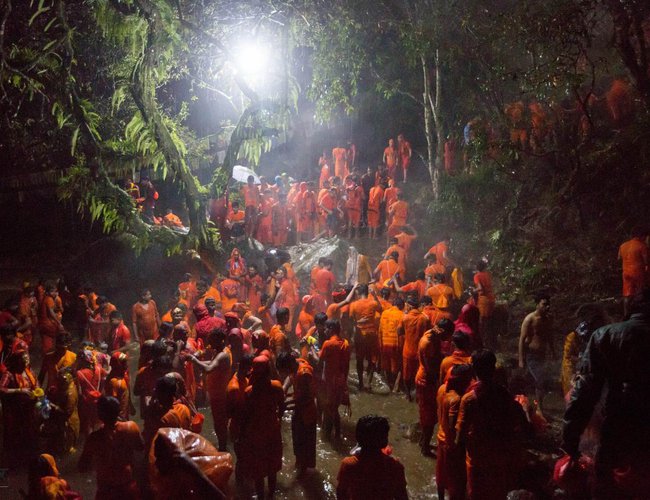 Hundreds of Bol Bom devotees gathered at Sundarijal today to take a dip at holy Bagmati and carry water to pour water on Pashupatinath chanting Bol Bom. There were rush of Bol Bom pilgrimage at Pashupatinath Temple from early in the morning.

“I am a devotee of Lord Shiva and find solace visiting His shrine, but the Bol bom is a special occasion for me. Earlier, I was member of a Bol bom group but this time I am alone,” said Ganga Yadav from Dhanusha.

Yadav is not alone thousands of Hindu devotees collect holy water during Bol Bom pilgrimage in different places in Nepal.

Hindu devotees from across Nepal and India among other countries thronged to various shrines of Hindu Lord Shiva as a part of 'Bol Bom', a holy pilgrimage ritual that is observed every year in the month of Shrawan.

In Kathmandu, the pilgrims usually bring water from Sundarijal and offer it to Lord Shiva at Pashupatinath temple. However, people in eastern Nepal visit Pindeshwor in Dharan carrying water from Kosi river.

Many Nepalis are taking part in Vaidyanath Temple in Jharkhand India carrying water from Ganga. During Bol Bom, most of the pilgrims walk barefoot in saffron robes to show their devotion to the deity. It is believed that participating in Bol Bom rally grants the wishes of the devotees.

There are reasons to do so. According to the Hindu scriptures, the Samudra Manthan or the churning of the ocean happened in the month of Shrawan, performed by Asuras and Devas. During the great churning, 14 different rubies emerged from the ocean.

From these 14 rubies, thirteen were divided among the Devas and the Asuras, while the 14th ruby, the poisonous Halahal, had the power to destroy the whole universe.

Lord Shiva consumed the Halahal and stored it in his throat. The gemstone was so poisonous that it turned his throat blue, giving him the name Neelkantha. The Devas offered water from the holy Ganges to Lord Shiva to reduce the effects of the poison.

This is why the month of Shravana is considered auspicious to offer water from the Ganges and rivers to Lord Shiva.

Although this is the third week of month of Shrawan, devotees continue to throng at the Shiva Temple in Koteshwor to offer puja. In 2019, Shravan starts from July 17 and will continue till August 15. The month marks Lord Shiva consuming the poisonous Halahal stone to keep the universe from destruction.

Avoiding the rain, there were rush of devotees in all Shiva temple across of Nepal.

Shrawan, the fifth month in the Hindu calendar, that begins from the first day of the full moon in late July and ends in the third week of August, holds special significance for Hindus.

Many Hindus take to fasting during Shravan, abstaining from eating on Mondays to appease Lord Shiva. Some also observe the Mangala Gauri Vrat on Tuesdays for the Goddess Parvati.