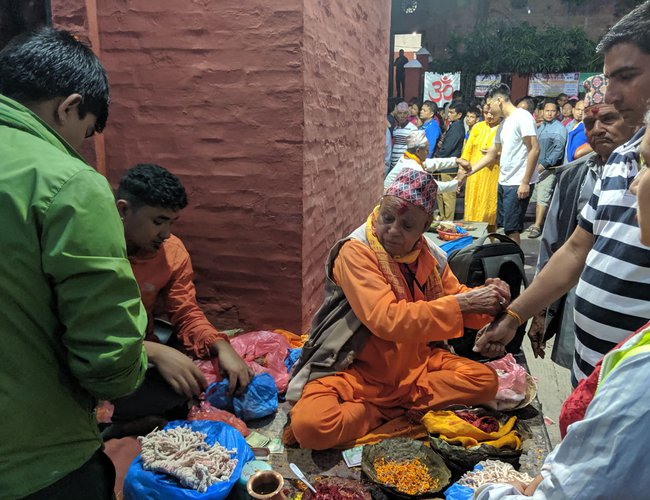 People from different walks of life celebrated Janai Purnima all over the country. In Kathmandu valley, the festival observed with family get togethers and feasts of Kwati or sprout lentils.

This day is also a harbinger of rejuvenation with Hindu men renewing their ‪Janai and people flocking to Shiva temples in different parts of the country. It is a big day to observe the Shaman culture.

On this day Shamans of the valley and around Nepal gather to perform their ancient rites in places like the Kumbeshwar in Patan, Gosaikunda in Langtang and Charikot in Dolakha. Devotees at Shiva Temple in Kumbeshwar, Bangala Mukhi, for celebration of Janai Purnima.

This full moon day sees a large number of Brahmins at the holy riverbanks. They take ritual dips in the water and offer ablution to the gods. They then change their sacred threads. Brahman priests tie yellow sacred threads around the wrists of the faithful.

Newars of Kathmandu Valley call this festival Gunhi Punhi and they prepare a soup of a mixture of beans called Kwati as special food for the day. Kwati is a nutritious soup made from sprouted beans. In this day, Newar also offers food to Frog.

At Kumbheswar in Patan, a richly decorated Lingam, the phallic symbol of Lord Shiva, is placed on a raised platform in the middle of the Kumbheswar pond to receive homage from devotees. Another ceremony that takes place here is Byan-ja Nakegu, during which rice is offered to frogs in gratitude for a good spell of rain.

The Hindu, Buddhist and Jain festival of Janai Purnima (also known as Rakhsya Bandhan) takes place on the full moon day of Shrawan. Janai refers to a sacred thread worn by men as they come of age, and purnima means the full moon. During this festival, Buddhists bathe in sacred streams and visit their temples, while Brahman priests offer ornamental threads to tie around the wrists of Hindus and in return receive gifts. The festival observes the bond of purity and security, and is known as the sacred thread festival.

Pashupatinath Temple is one of the most sacred shrines to Shiva, located on the banks of the Bagmati River, the waters offer the same guarantee of release from rebirth as the Ganges. The high-altitude Gosaikunda Lake in Rasuwa District is also very important at this time, and hundreds of pilgrims and shamans make the pilgrimage to take a ritual dip in the icy waters. Water from this lake is believed to flow some 60 km southwest to the Kumbheshwar Temple tank in Patan, thereby making this also another popular venue for this festival.

The sacred thread is a cotton string that is worn around the neck and across the chest by some Hindu males. It is given during a long religious ceremony called Bratabandhan, which is the formal process of being accepted into the religion, and marks a boy’s coming of age. The thread then has to be worn every day of their lives after this ceremony. Seen as a symbol of body, speech and mind, when the knots are tied, the person wearing it is supposed to gain complete control over each of these facets of life. The chord is changed if it becomes dishonored by the wearer committing acts forbidden by the religion. Otherwise, it must be changed without fail on Rakhsya Bandhan day.

The day before the festival, men wearing the janai cleanse themselves by shaving or cutting their hair and taking a bath. They only eat one meal of food considered to be ‘clean’ – so no meat, onions or garlic. On the day of the purnima, men typically go to take a bath, dipping themselves in the water three times in a river or pond. They then can break the old thread and replace it.

In the cities, the family priest will come to the home and the whole family will attend as he reads stories from a holy book and performs a ceremony to purify the new thread. This is then placed across the man’s chest. The priest is paid with food and money.

The thread tied around the hand is called doro, though it is often referred to as janai as well. On the day of the festival, men, women and children have a doro (sacred colorful thread) tied around their wrist. Usually men have it tied around their right wrist while women have it around their left wrist. It is believed to bring good luck and it is worn until Laxmi Puja day during Dashain, when it is removed and tied on the tail of a cow on the day of Laxmi Puja. Hindus believe that they have to cross the river Baitarni after death to reach heaven, and the cow will help cross this river by allowing the dead to hang onto her tail, but only if this person has tied their doro to the tail on this day.

As the priest ties the thread around devotees’ wrists, he chants a mantra that declares: “I tie on you (the devotee) the raksha that was tied on Bali, the King of Demons. Therefore Oh Raksha! Do not ever fail to protect this devotee, do not ever fail.” (Bhavishyottara Puran: 137/20)/

The Rakhi festival is marked by the tying of a holy thread by a sister on the wrist of a brother and forms the equivalent to Bhai Tika day during Tihar for some communities in Nepal. In return, the brother offers a gift to his sister and swears to look after her, as she presents sweets to him.

Newars celebrate this festival by cooking a special soup of different kinds of beans, called Kwati. Newar farmers also offer food items to frogs, as they believe that the frog is an agent of the god of rainfall, and making offerings helps increase the crops.

There are many legends behind the origins of the festival. Lord Ganesh had two sons, Shubh and Labh, and one day (on Rakshya Bandhan), Ganesh’s sister visited and tied a rakhi on Ganesh’s wrist. Jealous, the sons immediately began to demand Ganesh and his two wives, Riddhi and Siddhi, give them a sister. Ganesh agreed, and Santoshi Ma (Mother Goddess of Satisfaction) was created by the divine flames that emerged from Riddhi and Siddhi.

Another story from the epic Mahabharata tells how Draupadi, wife of the Pandavas, tore a strip of silk off from her sari to tie around Krishna’s wrist, to stop the bleeding from a battle wound. Krishna was touched by her action and declared her to be his sister, even though they were unrelated. He promised to repay the debt, and spent the following 25 years doing just that. Although married to five great warriors and being a daughter of a powerful monarch, Draupadi trusted Krishna completely. He repaid the debt of love during the Cheer-Haran (literally, “clothing-robbing”) of Draupadi, which occurred in the assembly of King Dhritarastra, when the Pandavas lost her to the Kauravas in gambling. Krishna extended her sari through divine intervention so it could not be removed, to save her honor.

According to legend, the Demon King Bali was a great devotee of Lord Vishnu, who had left his own home in Vaikunth to go and guard his kingdom. The Goddess Lakshmi wished to be with her lord back in her home, so she went to Bali disguised as a woman, to seek refuge till her husband came back. During the Shravan Purnima celebrations, Lakshmi tied the sacred thread onto the King. On being asked, she revealed who she was and why she was there. The king was touched by her goodwill for his family and her purpose, and requested the Lord to accompany her.

According to another legend, Rakshya Bandhan was a ritual followed by Lord Yama (the Lord of Death) and his sister, Yamuna. She tied a rakhi on Yama that bestowed immortality, and he was so moved by the occasion that he declared that whoever gets a rakhi tied by his sister and a promise of her protection, would become immortal.

Kojagart Purnima 2020: Kojagari Lakshmi Puja And Its Significance By Agencies 20 hours, 23 minutes ago

Navratri Day 8: The Significance Of Maa Mahagauri And Ashtami Rituals By Agencies 6 days, 23 hours ago 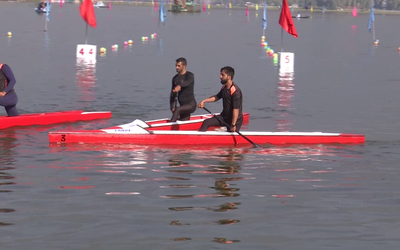