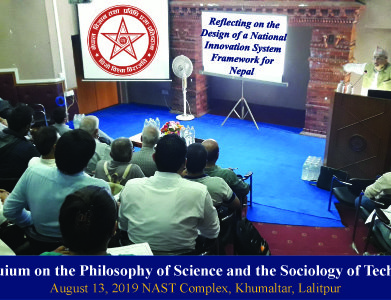 The word 'development' has migrated to Nepal from Rana days and transmogrified itself along the way: from being thought of as 'civilized' a century ago (in 17th-18th Century England it was 'improvement'), it has meant 'upward progress' then 'growth', 'Asian standards', 'basic needs' and finally now 'prosperity'. Science and technology are seen as key to this prosperity encapsulated in the slogan "Prosperous Nepal, Happy Nepalis"; and 'innovation' is the new mesmerizing term that encapsulates much hope and dreams within it.

If one googled "Center for Innovation" or "Institute for Innovation" one would come up with over 600 million hits. In the Global Innovation Index, Switzerland ranks 1st, US 3rd and Nepal 109th, behind Sri Lanka at 89th but ahead of Bangladesh at 116th. The new leadership of the Nepal Academy of Science and Technology (NAST) has decided to make sure Nepal comes up to double digits in the near future and has put its shoulders to the wheel with its push to bring about "Innovation for Prosperity". NAST, however, is conscious of the dilemma that this exercise not end up making it one more in a numbing crowd of over 600 million but one that would seriously help make critical change on the ground with concrete results.

While all global indicators such as these or MDGs and SDGs are suspect for their Euro-centrism – a fact pointed out by perceptive, young scientists participating in the 13th August NAST colloquium on this topic – an audacious ambition such as this does require some serious, reflection, introspection, discursive dialogue and innovation in thinking and ways of doing business in themselves. It also requires a more egalitarian "shared learning dialogue" within the entire science and technology community of the country and less of a high-handed "gifting" down of semi-divine wisdom. Hence the 13th August colloquium, to be followed on 21-23 October this year with a special conclave on innovation as part of NAST's International Science Youth Congress, and a major national conference towards the end of the year.

Problem starts with the term 'innovation' itself and whether it is a word that has struck roots in fertile Nepali soil or whether it is merely sterile scholasticism. For example, gender folks have been translating patriarchy as 'pitri-sattatmak' when the word 'pitri' really means 'departed ancestors' and that translation ends up meaning not 'men-ruled' but 'ruled by departed ghosts'! Innovation has been translated as nawa-prabartan by science ministry's bureaucrats but the term is problematic when the Sanskrit prefix 'pra' itself denotes 'new' without the need for 'nawa' to mean 'new-new'. What then would be the Nepali word for its antonym – exnovation? It is a term that has come into management studies via former US Secretary of State Rex Tillerson when he was still the chairman of Exxon, when he argued that successful business models did not rely on disruptive innovation but on tried-and-tested means to increase market share. Former Himal editor Basanta Thapa thinks a better Nepali word would be 'abhinab' with a dash of 'srijansheelta' (creativeness) thrown in.

Other questions that come up are: what is innovation in the Nepal's context, what has worked and been adopted, what would work but has not been allowed to strike roots, what works but should not be allowed to anymore, what are the constraints to good innovation, what should be done about it – by government agencies, private sector and academia as well as voluntary civic movements. A tall order, but one that neither NAST nor anyone else interested in fostering a fresh, innovative culture in Nepal can avoid.

If one looks at the issue globally, one sees technical innovations hogging the limelight, putting other factors in the shade. It was Nicola Tesla who was really "the man who invented the 20th Century" with his brilliant innovations that gave us universal electricity; however, it was Thomas Edison who really marketed those ideas successfully. It was Steve Wozniak's technical precocity that was behind the innovation of desk-top and lap-top computing, but it was Steve Jobs ("who could not even write a line of program", according to Wozniak) who made Apple the success it is today. Cartoonist Walt Disney is credited, and rightly so, with making cartoon films and Mickey Mouse a global icon; but few know that it was a marketing genius Kay Kamen who realized that Disney toys were not meant to sell the movie but, the other way around, the movie was meant to sell the toys to a rural America moving into suburbs and looking for familiar toys for their children. With monopoly marketing rights, he was able to boost Disney sales from three hundred thousand dollars in 1930 to thirty-five million in five years.

Technical innovations neither sell themselves nor do they become successes without the right configuration of market forces, as the above examples show. In Nepal's case, a much better mountain-friendly and climate friendly technology – the ropeway which was introduced as early as 1924 – has so far lost out to an ecologically devastating technology (hillsides gouged out to carve unstable and easily washed away roads) to run carbon spewing diesel trucks. The numbers are astounding: goods carrying ropeways are three times cheaper to build than the cheapest hill rural roads, eight times quicker to install, and are twice as energy efficient (they require only 34 Mega Joules of Nepali hydroelectricity per ton of goods ferried compared to roads that consume 53 MJ per ton; see: http://nwcf.org.np/wp-content/uploads/2019/03/Ropeway.pdf). But diesel marketing has been so successful no village council chief wants ropeways: they all want ecologically devastating and expensive roads and their Hilux and Pajeros which is bankrupting this country which buys 25 billion rupees MORE of petroleum products than its entire development spending.

For Nepali scientists and technologists, the challenge is to re-think technology and development in the context of game-changing innovation. This means worrying less about the artifact and more about the social context that is a help or hindrance to its use. The philosopher of cities, Jane Jacobs has succinctly captured this conundrum in her study of Detroit, which was nothing more than a small village that repaired ships that carried grain from the US prairies. It was able to creatively parry this skill to innovating products – toothpaste, horse carriages etc. – that could be sold within Detroit as well as its hinterlands. What this meant was it did technology replacement and NOT technology transfer. The former is a display of creativity by its cheerful small entrepreneurs: the latter is merely tax and other subsidies that governments give to attract big businesses which leads not to prosperity but a race to the bottom. Detroit's cheerful innovative creativity ended when Ford set up its plant there and it made the city a "company town" where there were no entrepreneurs, only employees. The former migrated to Los Angeles with the consequence of its prosperity and Detroit sinking into the Rust Belt.

The philosopher of technology are divided into three schools of thought: the instrumentalists who consider it value-neutral and sanitized of politics (mostly neo-classical economists); the substantivists such as Martin Heidegger and Jacques Ellul who see its modern form as imposing colonizing determinism on society, stifling humans as "standing reserve", i.e. valuable but dead timber versus a living tree with many other values; and critical theorists who try to find a middle ground between these two extreme positions. They critique the substantivists who focus on moral values by arguing that it does not work because practicality always wins; and they critique the instrumentalists for their belief that strong governments can provide the political bounding which in many cases only seems to lead to bureaucratic corruption and stagnation a la the Soviet Union. They argue that technology is not a destination but a scene of struggle where innovative education is critical to transforming technology to serve society and not have society serve technology. In Nepal's case, for instance, are we teaching our upcoming generation to value individualized automobiles or communitized public transport?

Another philosopher of technology, Brian Arthur has expanded on this understanding of what technology really is by first debunking the idea that it is only applied science (both technology and science move in lock-step and not the former following the latter: science of astronomy would not have come about without the invention of the telescope, and genetics without advances in microbiology and molecular physics). He then goes on to show how it is technology's "structural depth" and "deep craft" within its different domains that allows a society built around problem solving that can actually innovate. Anyone who was solving a knotty problem could go around the corner (in a society with structural depth and deep craft of domain practioners) to find someone wrestling with a similar problem from another domain. It happened with textiles in Britain of the 1700s, chemical industry in Germany of 1800s and IT of Silicon Valley in the 1900s.

Nepal's challenge in fostering innovation will lie in understanding early Detroit rather than "company town" Detroit.