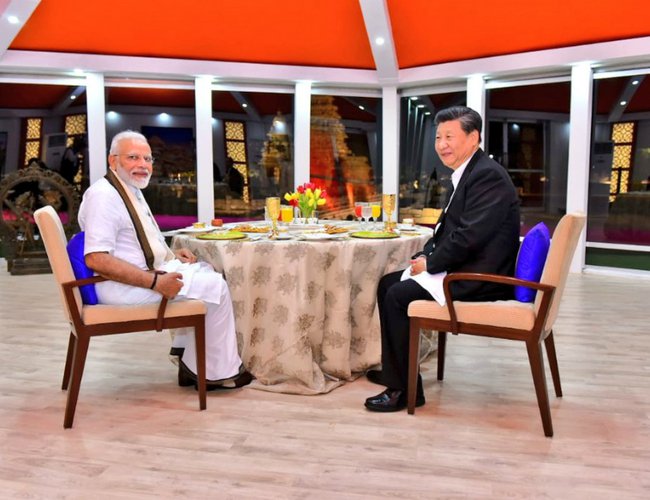 Ministry of External Affairs spokesperson Raveesh Kumar said Modi and Xi concluded a "highly productive day with a pleasant conversation over a long dinner", continuing their exchange of views on deepening of the India-China partnership.

Prime Minister Narendra Modi and Chinese President Xi Jinping expressed concern over the issues of terrorism and radicalisation in the "nearly five hours of quality time and discussion" they spent together in Mahabalipuram, Foreign Secretary Vijay Gokhale said in a late-night media briefing on Friday.

"The two leaders held detailed discussions on their respective national vision," said Gokhale. He added that Modi and Xi also discussed trade-related issues, including how to enhance bilateral trade volume; they also deliberated on the trade deficit and identified investment areas.

Gokhale said the issue of terror was taken up in the mostly one-to-one discussions as well. "There was an acknowledgement that both the countries are very complex and very diverse. The two leaders said that these are large countries and that radicalisation is a matter of concern to both and that both would work together so that radicalisation and terrorism did not affect our multi-cultural, multi-ethnic multi-religious societies," he said.

According to the foreign secretary, Xi said he was looking forward to working with Modi on all issues.

Gokhale said both leaders share a very personal rapport, as seen from their interaction during the temple tour of Mahabalipuram on Friday evening. After Xi touched down in Chennai in the afternoon, he was accorded a red-carpet welcome in the state capital. He then made his way to the coastal town of Mahabalipuram, where the visiting dignitary was received by Modi.

In the backdrop of the seventh-century rock-cut chariots of Pancha Ratha overlooking the Bay of Bengal, Modi and Xi sipped coconut water and engaged in casual interaction, sending signs of positive atmospherics in bilateral ties strained over the issue of Jammu and Kashmir.

Modi, dressed in the Tamil attire of a 'veshti' (dhoti), white shirt and an 'angavastram' (shawl), took Xi around Mahabalipuram on a guided tour of the world heritage sites of Arjuna's Penance, the Pancha Rathas, and the Shore temple, kicking off the second informal summit between them.

Ministry of External Affairs spokesperson Raveesh Kumar, who was also present at the joint briefing where no questions were taken, said Modi and Xi concluded a "highly productive day with a pleasant conversation over a long dinner". The two leaders continued their exchange of views on deepening of the India-China partnership, he said in a tweet.