Gambhir Man Maskey was a good human being with simplicity, politeness and kind heartedness

Statue of Late Gambhir Man Maskey was unveiled at the school where he devoted his 28 years as the headmaster. Maskey headed Viswa Niketan Secondary School (VNSS) situated in the banks of Bagmati river at Tripureshwar, Kathmandu from 2023 to 2051 B.S. A social organization, Viswa Niketan-Gambhir Man foundation, formed on the initiative of the ex-students of the school erected the bust of Maskey at the premises of the school.

'Gambhir Man Maskey was a good human being with simplicity, politeness, and kind-heartedness. His invaluable contribution to this school as its headmaster, education administrator, and the manager will be long remembered' - the stone carving therein describes Maskey.

School's past principals and Mr. Maskey's friend jointly unveiled the bust on the first anniversary of Maskey who passed away on the 2nd of December last year.

In the unveiling ceremony, Heramba Raj Kadel, the principal of the school said, 'We are proud to have the symbol of simplicity, politeness and hard work at the school premises. This will inspire the generations to come.' He said, 'Gambhir Man Maskey used to be the synonym of Viswa Niketan. This has materialized with his statue at the school premises.' 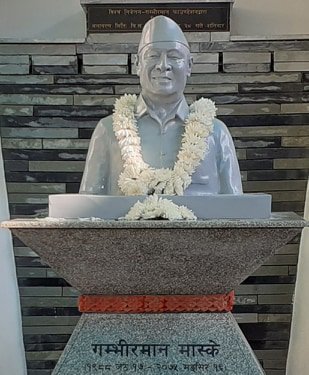 On the occasion, Mr. Gopal Shrestha, the ex-student of the school and the chairman of the school management committee lauded the dedication of Mr. Maskey towards the quality education.

Mrs. Manju Adhikari who retired from the school as a Nepali teacher 21 years ago recalled the moments she worked under Mr. Maskey.' He used to treat all the teachers and school staff as friends. I never heard a harsh word from him during my entire teaching career.' said Mrs. Adhikari.

On the occasion, Mr. Maskey's granddaughter Dr. Safala Maskey remembered her grandfather always motivating his grandchildren to be virtuous.

Thanking all those extending support in erecting the statue, Mrs. Bindra Kachhapati Pradhan reiterated the Foundation's determination to work hand in hand with the community towards the quality education as envisaged by Mr. Maskey.

VNSS, a co-education school was established in 2003 B.S. Maskey entered the school in 2017 as an English teacher. He was promoted to the headmaster 6 years later. The school has been reigning as one of the leading community schools of the country and the ministry of education has awarded it 'the school of the year' twice.

Renowned educationist Mr. Maskey was born on 17 Jestha 1988 B.S. at Bangemudha, central Kathmandu. He completed his school from Padmodaya High School and earned his bachelor's degrees in humanities and education from Tribhuvan University. Born as the second child of renowned artist Mr. Chandra Man Maskey, he was deprived of parental love and affection following the death of his mother when he was 2 years old and the senior Maskey being jailed by Rana rulers. Thanks to his good Karmas, he had loyal sons, in-laws, and grandchildren who carefully looked after him until he succumbed to his illness at the age of 87.

Refugees In Nepal: Recognition And Inclusion By Deepesh Das Shrestha 3 days, 19 hours ago

Nepal’s 2022 elections: a step towards democratic consolidation? By Sovit Subedi and Bishnu Adhikari 4 days, 18 hours ago

The Fantasy Of Democracy & Republic Morphing Into Delirium By Kedar Neupane 5 days, 18 hours ago