Purna Bahadur Amatya is the youngest son of late Kirti Bahadur Amatya and late Dharma Kumari Amatya from Trishuli. It has been 42 years since he started an inning with a black board, chalk and duster for the first time. 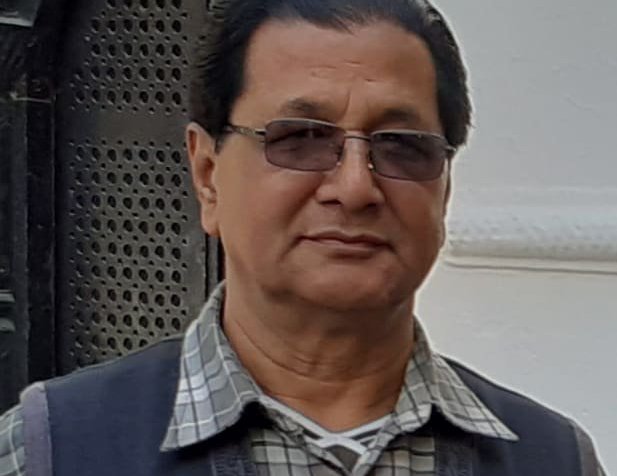 Every student who had sat for lectures of Purna Bahadur Amatya during the school days is thrilled when his name surfaces. Almost all the students remember him as a teacher of discipline who rarely excused them for failing to complete their assignment in time. This picture of a strict teacher subsides as soon as his skill of imparting knowledge to his pupils revisits their memory. Those fortunate products of Viswa Niketan Secondary School (VNSS) always praise their guru of numbers and logic for mathematical proficiency they command today.

Purna Bahadur Amatya is the youngest son of late Kirti Bahadur Amatya and late Dharma Kumari Amatya from Trishuli. It has been 42 years since he started an inning with a blackboard, chalk and duster for the first time.

Amatya, who was born on a full moon day of Baisakh 2009 B.S. (so is his name derived as Purna - meaning complete) finished his school education from Tribhuvan Trishuli High School of Nuwakot district in 2026 B.S. He came to Kathmandu that year for the first time to appear for the School Leaving Certificate (SLC) examination. He cleared the exam in the very first attempt. He joined Intermediate of Arts (I.A.) at Tri Chandra College in 2028 B.S. and earned his Bachelor of Education (B.Ed.) in 2032 B.S. with mathematics as the major subject.

He entered VNSS in 2034 B.S. as a mathematics teacher and started taking classes at the secondary level. It was the turning point for the school where the students had a phobia of mathematics until then. He put his every effort to improve their performance. Ultimately, it paid back. Students who used to worry for a mere pass mark started to compete for the full marks. In the later years, receiving 90 and above became a normal deal for most of Amatya's students.

What was the reason behind the improvement? “Regular assignment and practice,” explains Mr. Amatya, who grew up in his school days with extensive numerical exercises from Chakravarty Arithmetic, Algebra by K.P. Basu and rigorous practice of theorems of Geometry. “You have to follow rules and work hard if you seek improvement,” he says.

Interestingly, there was a time when students used to excuse the bunch of home works of mathematics for failing to complete the assignments of the rest of the subjects. Amatya, who was also the assistant headmaster and looked after the school administration those days, discloses the instances he had differences with the then headmaster Gambhir Man Maskey on the matter. Amatya used to point out the excessive leniency of the headmaster for the consequence. For Maskey, it would be impossible to counter his explanation.

When Amatya had the opportunity to be the successor of late Maskey in 2051 B.S. following the retirement of the latter, he declined to be the candidate. Amatya, the man of principle, opined that seniority deserved a priority and there were colleagues in the school senior to him. He says, “It is up to the one to judge their capability to run the institution and decide. To occupy a post for the sake of showing off is a waste of time and is detrimental to the growth of the institution,” he asserts.

It was not that he had been the only one mathematics teacher in the school. But students preferred Amatya to the rest. The queue of students eager to join the private tuition classes at his residence at Naradevi, Kathmandu, was the evidence. To receive his guide, boys and girls had to book their placement a year in advance. He becomes nostalgic as he recalls the past. For a brief period, he also taught English grammar.

Amatya also pursued Masters of Education (M.Ed.) simultaneously with his teaching career later on. He received a degree in 2042 B.S.

He was the founder chief of a higher secondary wing of the school from 2052 to 2069 B.S. After a long 34 years and 9 months of uninterrupted exemplary service to the nation's education sector, he retired in 2069 B.S.

His passion for teaching has not withered yet even when he has a son - a medical doctor pursuing his M.D. in cardiology and a granddaughter from his daughter. He still takes 18 classes a week in VNSS. However, he is worried over the diminishing enthusiasts to learn numbers and logic from the heart.