President Trump Lashes Out Nancy Pelosi On Eve Of Impeachment

President Trump Lashes Out Nancy Pelosi On Eve Of Impeachment 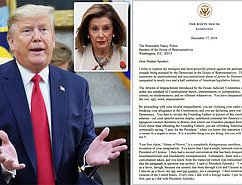 President Donald Trump has angrily lashed out against Democrats and their impeachment investigation in a rambling, grievance-laden letter to House speaker Nancy Pelosi.

Hours before the House of Representatives was due to vote on articles of impeachment against him, the president released a six-page document, and later doubled down his attack in comments delivered in the Oval Office.

“I write to express my strongest and most powerful protest against the partisan impeachment crusade being pursued by the Democrats in the House of Representatives,” Trump wrote. “This impeachment represents an unprecedented and unconstitutional abuse of power by Democrat lawmakers, unequalled in nearly two and a half centuries of American legislative history.”

Over the six pages that he filled, Mr Trump aired a litany of complaints and grievances against Democrats’ efforts to impeach him for withholding military aid to Ukraine to force that country’s president to announce an investigation into former vice president Joe Biden and a widely-discredited conspiracy theory which posits that Ukraine – not Russia - interfered in the 2016 election.

Shortly afterwards, speaking to reporters in the White House, the president hit out at the impeachment process, terming it a “sham” and a witch hunt”.

Asked what responsibility he took for the events unfolding around him, he replied: “Zero”.

Talking to reporters as he hosted Guatemala’s leader, Jimmy Morales, the president claimed he would not be watching the vote, due to take place Wednesday.

Whether that is the case remains to be seen; he also insisted he would not watch witnesses called by the Democrats as part of their probe, and then proceeded to live tweet criticism of them.

And despite the president claiming the impeachment process has no legitimacy, many have pointed out he nevertheless is desperate not to carry its rare stain into the footnotes of history.

The letter released by the president on White House letterhead again appeared to be another episode involving Mr Trump, that carried no precedent.

“You are offending Americans of faith by continually saying ‘I pray for the president,’ when you know this statement is not true, unless it is meant in a negative sense,” he wrote. “It is a terrible thing you are doing, but you will have to live with it, not I!”

In comments referring to the more progressive members of the Democratic Party, individuals Mr Trump has sought to portray as representative of the whole party, he accused Ms Pelosi of having led a “libellous and vicious crusade”, and said she was “motivated by personal political calculation”.

He added: “Your speakership and your party are held hostage by your most deranged and radical representatives of the far left. 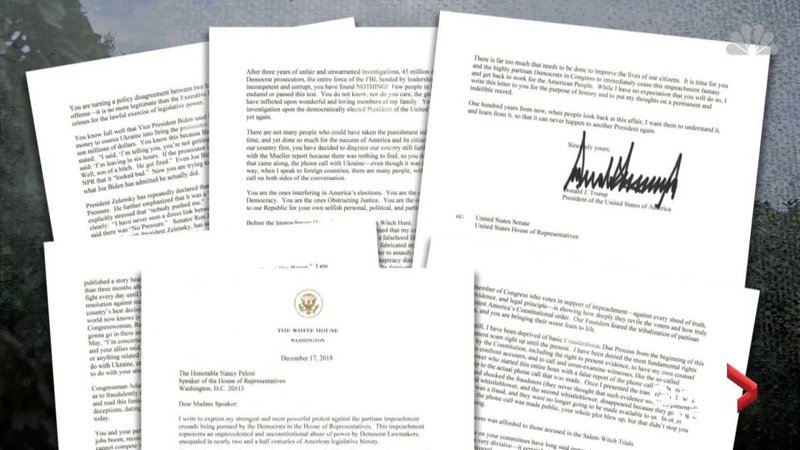 “By proceeding with your invalid impeachment, you are violating your oaths of office, you are breaking your allegiance to the constitution, and you are declaring open war on American democracy.”

Ms Pelosi told reporters she had yet not read all of Mr Trump’s letter, but that she and her colleagues had “seen the essence of it”. She added: “It’s really sick.”

Earlier on Tuesday, Senate majority leader Mitch McConnell, the man who will oversee the Mr Trump’s trial in the upper chamber of Congress after this week’s vote in the House, announced he was not agreeing to Democrats’ demands to call four witnesses for those hearings.

Replying to Democratic senator Chuck Schumer’s request to have several current or former White House officials give evidence, Mr McConnell said that would not happen. 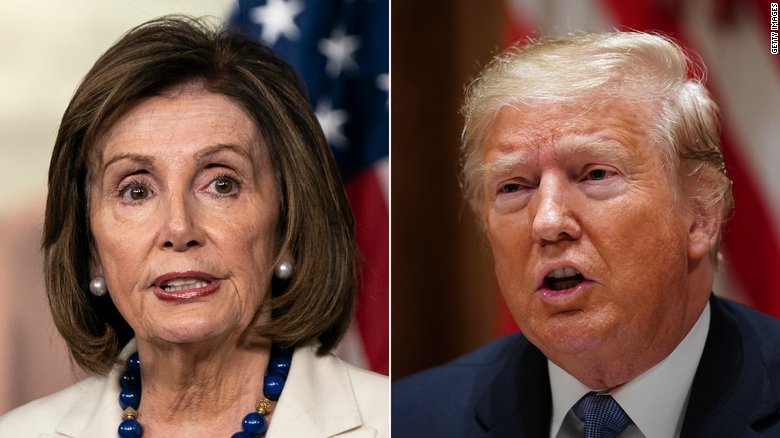 “It is not the Senate’s job to leap into the breach and search desperately for ways to get to ‘guilty’,” he said.

Mr Schumer later told reporters: “It’s clear that Senator McConnell wants to use the Senate to help participate in a cover-up.”

In truth, both men were likely engaged in a degree of posturing. When Republicans in the House impeached Bill Clinton 20 years ago, there was considerable negotiation with the Senate, which was controlled by Republicans, over what witnesses would be permitted.