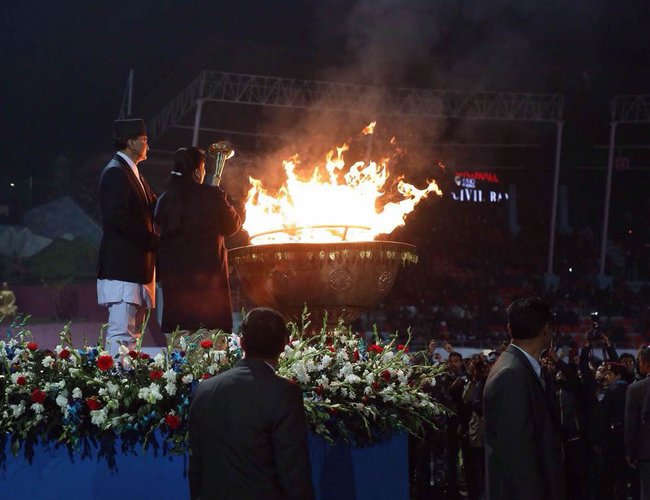 “However, since we say that tourism is the main pillar of Nepal’s economic development, the target of two million tourists and this program itself is not adequate,” he said. “Thus, we will consider this year as the beginning point for tourism development as it will create new psychology for development,” he added.

According to him, tourism has contributed about 3 percent to the national economy and it will be raised to 10 percent by the time the current 15th plan concludes. Similarly, foreign tourists have been spending US$ 44 each day which should be increased to $80.

Minister Bhattarai invited one and all to visit Nepal saying that it had 20 protected areas covering 23.23 percent of the total area of the country and it had seven Unesco World Heritage Sites, including the world-famous Sagarmatha and Chitwan National Park, Swaymbhunath and Bauddhanath stupas, temples and Durbar Squares in the Kathmandu Valley.

“The country is fit for tourism in terms of culture, heritage, nature, flora and fauna, mountains, Himalayas and adventure activities. We will create a new benchmark in tourism and will create a new image of Nepal in the hearts and minds of the people across the globe,” he said.

Speaking on the occasion, Indian Minister of Tourism Prahlad Singh Patel said that India had seen Nepal as a true and strong partner in development and tourism. He pledged support to the VNY2020. “Nepal is a major tourist destination for the Indian tourists so there are areas where the two countries can collaborate,” he said.

Similarly, Jamaican Tourism Minister Edmund Barlett said that Jamaica and Nepal shared the common realities of vulnerability like the earthquake so the tourism entrepreneurs and the government must be aware to maintain resilience.

Jazeera Airlines To Operate First Flight To GIBA On May 16 By NEW SPOTLIGHT ONLINE 2 weeks, 2 days ago

Nagarkot Is Famously Known For Its Loveliness, Amazing View And laid-back Feeling By Fanny Jonckeau 1 month, 4 weeks ago