Those advocating for developing environment-friendly and sustainable airport along with minimum adverse impact on forests and biodiversity have also challenged the approved EIA report and its alternative analysis. 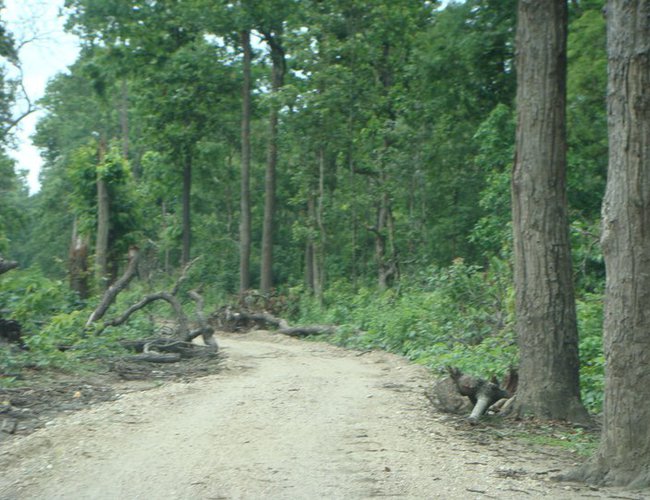 Likely impacts on forests and biodiversity, along with ecological goods and services provided by the Nijgadh forests, as contained in the approved Environmental Impact Assessment (EIA) Report of Nijgadh airport, was shared in September 2018 (https://www.spotlightnepal.com/2018/09/20/international-airport-forests/). The report was approved by the Ministry of Forests and Environment (MoFE) in May 2018 as per the provisions of the Environment Protection Act (EPA), 1996 and its Rules, 1997. During the last 15 months of this publication, several issues have been raised and feature articles published, including of CAAN DG, on the need for constructing airport, and conserving forests and biodiversity. Those who advocate for Nijgadh airport have not seen any alternative than Nijgadh forests. Those advocating for developing environment-friendly and sustainable airport along with minimum adverse impact on forests and biodiversity have also challenged the approved EIA report and its alternative analysis. Two petitions have been registered and Supreme Court has issued Interim Order to stop all activities related to clearing of Nijgadh forests for airport development (https://www.spotlightnepal.com/2019/12/22/supreme-court-issues-interim-order-stop-all-activities-construction -nijgadh-international-airport/).

Approved EIA report is a legal document. Proponent should comply and implement enhancement and mitigation measures as included in the report. In case of non-compliance, Government may stop the implementation of the proposal or punish the proponent. In Chandragiri Hill, a resort was constructed in contrary to the approved EIA report. In this case, MoFE punished the proponent with a fine of NRs 20 lakhs and instructed the party to submit the Supplementary EIA report as per the legal provision. The EPA, 2019 has provisioned this punishment up to NRs. 50 lakhs and up to its three times if proponent acts in contrary to the punishment.

In general, EIA report of any project, planned for construction and/or implementation in forests, evaluates impacts significant on forests and biodiversity and proposes measures for their conservation. Biodiversity conservation through EIA is equally important as per the Convention on Biological Diversity (CBD) to which Nepal is a Party and Nepal's Treaty Act (1990), including other legally-binding and non-legally binding international instruments. Such a report also focuses on compliance with national and international commitments on natural resource conservation, including forests, water and biodiversity.

Project developers and conservation communities frequently recall the fate of 'Arun III' hydro-electricity project in 1993. Many politicians blame for environmentalists while conservationists believe it otherwise. After completion of detailed design and financial allocation to develop East Rapti Irrigation Project (ERIP) with command area of over 8,000 ha in late 1980s, the Chitwan National Park Office refused to permit dam construction on the Park side to divert water for irrigation without EIA study. The Asian Development Bank sent a mission which recommended EIA. The final EIA report recommended to implement Farmers' Managed Irrigation Scheme (FMIS) and carry out environmental monitoring, instead of dam and canal construction. This EIA brought back ERIP into the 'redesign stage'. Implementation of this irrigation project through FMIS provided irrigation facility to over 8,000 ha.

Alternative analysis is a 'built-in heart' of the EIA process. Recalling 2003, Department of Irrigation requested the then Ministry of Forests and Soil Conservation (MoFSC) for forest area to construct canal of the Babai Irrigation Project. The Ministry advised to submit the approved EIA report to process for providing forest area for this project. The proponent submitted the approved EIA report which contained 2 alternatives: (i) loss of 66 ha of forests; and (ii) loss of 22 ha of forests. The later alternative was selected in the EIA report. This clearly indicates the significance of alternative analysis. Other countries also cite these examples from Nepal to help understand contribution of EIA in conserving forests and biodiversity. These evidences should not be overlooked.

Approved EIA report can't be technically accepted as an EIA report of the Nijgadh airport as the report does not include impact of airport activities such as runway, taxiway, apron, terminals, maintenance complex and utilities on the forest environment. The approved report mentions that detailed feasibility study report was 'not available for review'. It further mentions that comments of SIAP (Second International Airport Project), CAAN and MoCTCA have been incorporated, which questions on 'ownership' over the report. Here, alternative analysis as contained in approved EIA report is revisited.

In Nepal, EIA report of any proposal is based on scope of work as included in the legally determined Scoping Document, and approved Terms of Reference (ToR). The ToR was approved by the then Ministry of Environment (MoE) on BS 2067/10/27 during the then UML government. As mentioned in the approved ToR, one of the objectives of the EIA study was to 'identify and adequately assess impacts in different alternative scenarios of a proposal to assess different alternative development options on environmental ground'. Furthermore, the approved ToR instructs, in line with the Environment Protection Rules (1997), to consider design, project site, technology, procedure of operation, time schedule and raw materials, and environment management system, including risk evaluation of 'various project alternatives' while analyzing alternatives. The approved ToR also instructs the proponent to analyse 'no project option' and 'no forest option'. The objective and conditions are clear enough to analyse environmental impacts of 'with, without & within' project.

The then Ministry of Environment started inclusion of 'no forest option' as a part of alternative analysis in ToR of several projects before issuing the ToR as per the advice of the then MoFSC or its official representative, attending the EIA Report Suggestion Committee. It should be on record that the airport was planned to construct in forests and one of the major element of alternative analysis was 'no forest option'. Based on EPR (1997), proponent prepares and submits the ToR and the Ministry approves as submitted or in the revised form. As mentioned in the approved ToR, the then Ministry of Tourism and Civil Aviation was the proponent of this project. Based on approved EIA report, Civil Aviation Authority of Nepal (CAAN) is now the project proponent. Hopefully, MoFE has evidence of this change before approving the EIA report legally.

In principle, alternative analysis should evaluate environmental impacts of 'with' and 'without' project. If 'with' project alternative is selected, different alternatives 'within' project are analysed to select 'best option'. Under alternative analysis, the approved EIA report mentions 'clearance of large forest area will have significant adverse impact not only losing the large dense forest with major sal species but also on ecological balance in the surroundings and could also affect the ground water recharge'. The report: (i) proposes to develop airport city on the south of the proposed airport; (ii) mentions runway close to the Parsa Wildlife Reserve and adverse impacts of aircraft noise on wildlife; (iii) also mentions ICAO guidelines that does not permit to have airport runway to such a close vicinity of wildlife conservation area; (iv) outlines beneficial impacts such as air transport facilities to tourists and travelers, increased connection, and basis for economic development of a nation and surrounding areas; and (v) confirms loss of large forest area, ecological unbalance due to such loss, adverse effects on groundwater recharge and stream discharge (affecting irrigation), and removal of 3 settlements (Tangiya Basti, Mateyani and Kathaghat). However, it recommends to implement the project, based on beneficial impacts predicted. This clearly shows differences on what was instructed to analyse through ToR, what is analysed and recommended in spite of significant adverse impacts on forests and biodiversity. In a nutshell, EIA report ignores approved ToR and does not analyse environmental impacts of 'no forest option'.

The EIA report does not provide information on project activities-based impacts. In principle, EIA report must include activity-based identified and predicted impacts, and evaluated impacts with 'criteria-based significance'. The report evaluates loss of forests and forest products, loss of indigenous, endangered and threatened plant species, and impact on biodiversity, wildlife and habitat loss as 'significant impacts', using numerical as mentioned in National EIA Guidelines (1993). It proposes compensatory plantation at the rate of 1:25. A total of 38,294 ha of land will be required for plantation as per the government procedures and norms. However, the Government has released few months back a Procedure to provide national forest area to national priority project which includes compensatory plantation @ 1:10. As EIA report was approved before the approval of 2019 Procedure, compensatory plantation @ 1:25 should apply in Nijgadh airport. Proponent might face number of challenges in finding areas for plantation and protection for 5 years.

Almost all EIA reports of Nepal that affect forest area have focused on biodiversity conservation. Some projects have made mono-culture compensatory plantations. Experience indicates sufficient gaps in implementing mitigation measures as contained in the approved EIA report. In case of 77 km long Nijgadh-Kathmandu fast track road, 27,069 trees (out of 38,664 trees) have been cut. The proponent should plant 966,600 (@ 1:25) saplings, and manage for 5 years. About 604 ha of land would be required for plantation if planted @ 1600 saplings per hectare. It is also reported that Nepal Army has so far planted 5,000 saplings and has produced 150,000 saplings which comes to about one-sixth of the compensatory plantation. It is equally necessary to promote objective-based plantation, location and species selected, mortality rate and replacement provisions. Several environmental issues emerge in 'mono culture plantation'.

As the proponent has not analysed alternatives as per ToR, and EIA report itself evaluates highly significant adverse impact on forests and biodiversity, the proponent is encouraged to conduct Supplementary EIA to, inter alia, analyse approved ToR-based alternatives, and evaluate project activities-based impacts, by following the EIA principles and EPA (2019) provisions.

China’s Rapid Transformation And Lessons To Learn By Krishna Silwal 10 hours, 30 minutes ago

Youths In Nepal Elections: From Social Media To National Platform By Sangya Dhakal 2 days, 8 hours ago

Skeleton In The Sandook By Hemant Arjyal 3 days, 7 hours ago

An Overture Filled with Confusion By Dr. K. Uprety 4 days, 13 hours ago