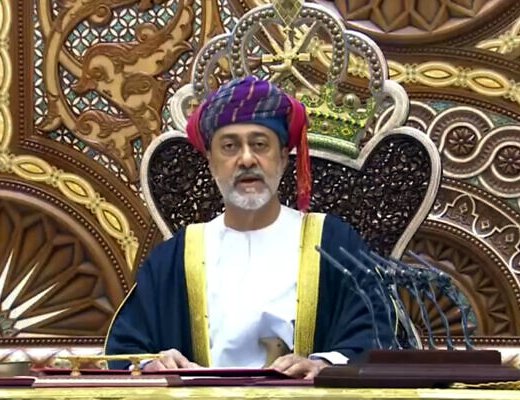 The announcement on Omani state television was read over footage showing thousands gathered in the capital, Muscat, for the funeral of Sultan Qaboos who ruled the country for 50 years and did not have any children. His choice of successor was a closely guarded secret believed to have been known only to the sultan.

“It is a sad day in Oman, but also represents a new beginning with a new leader,” a presenter on the state TV said soberly.

Qaboos, the Middle East’s longest-ruling monarch, came to power when he deposed his father in a 1970 palace coup. He was known internationally for his diplomatic balancing in the Persian Gulf. Under his leadership, Oman often served as a facilitator of talks between adversaries, including I ran and the US.

The new sultan vowed in an address carried on Omani state TV to continue the foreign policy approach of Qaboos, one that he said is based on peaceful coexistence between nations and on non-interference.

“We will follow the path of the late sultan,” Haitham said.

He expressed support for “our country’s foreign policy of peaceful living among nations and peoples… and not interfering in the internal affairs of others, respecting nations’ sovereignty and international cooperation.”

Oman, a former British protectorate that sits on the southeastern tip of the Arabian Peninsula across from Iran, is a close ally of Washington and viewed as a valuable regional player. It shares borders with Saudi Arabia, Yemen and the United Arab Emirates.

Qaboos died at the age of 79 from an illness that was never publicly disclosed or confirmed. For years, he’d sought treatment in Germany where he spent eight months between 2014 and 2015.

Following Islamic tradition, the sultan was buried before nightfall.

His successor is a career diplomat whose role as minister of national heritage and culture helped project Omani influence. Local media in the Gulf reported Sultan Haitham is a cousin of Qaboos.

The new sultan was selected in an intricate process that was broadcast on state TV. The country’s Defense Council, in the presence of the Royal Family Council, was shown cutting open a sealed letter in which Sultan Qaboos names his choice for successor. The Defense Council then read the contents of the letter aloud before all those present in the meeting, announcing Haitham bin Tariq Al Said as the dynasty’s heir.

According to Oman’s succession laws, the letter is to be opened if the Royal Family Council cannot agree on a successor within three days. The Al Said family has ruled Oman since the eighteenth century, and once ruled over Zanzibar too.

The quick announcement of a successor and the unsealing of the letter suggest the ruling family wanted to name a successor without delay. The speed and manner in which a successor was named could help project a sense of unity, continuity and stability as tensions run high in the Persian Gulf amid escalations between Iran and the United States.

In Muscat, soldiers stood guard along the streets and troops stood with machine guns atop SUVs as Omanis gathered along a highway to see the motorcade that was carrying the sultan’s body for burial.

Thousands also gathered at the Sultan Qaboos Mosque where funeral prayers were held before his burial. The mosque is an architecturally stunning complex of white marble and manicured gardens that reflects how the sultan modernized his country without eschewing its cultural heritage or building towering skyscrapers like other neighboring Gulf capitals.

Following his burial, state TV played recitation from the Quran and then broadcast the unsealing of the letter by the Defense Council and the subsequent inauguration of Sultan Haitham at a palace in Muscat.

The new sultan is known in international policy circles because of his interactions with world leaders and other royals. For example, he greeted Prince Charles and his wife Camilla when the British royal couple arrived in Oman in 2016. He was also present

This experience “was considered to have provided him with the necessary political gravitas and foreign policy expertise to help steer Oman into a post-Qaboos era,” said Sigurd Neubauer, a Middle East expert, in an analysis for The Arab Gulf States Institution in Washington.

Oman’s delicate foreign policy balancing act is expected to remain unchanged under the new sultan, according to analysts.

Sultan Qaboos shaped Oman’s policy of non-interference, refusing to join the Saudi-led coalition at war in Yemen and keeping the country’s border with Yemen open throughout the conflict. He also did not join a Saudi and Emirati-led boycott of neighboring Qatar, and has maintained relations with both Saudi Arabia and Iran.

Last year, the sultan hosted Prime Minister Benjamin Netanyahu in a surprise visit. It marked the first visit by an Israeli leader in more than 20 years to the tiny Gulf state, further cementing Oman’s unique strategic ability to be a facilitator and even mediator amid fractured Mideast states.

The new ruler of Oman faces monumental challenges in steering his country both regionally and domestically.

Small protests broke out in Oman as part of the wider Arab Spring unrest in 2011, revealing discontent over corruption, unemployment and rising prices within the sultanate.

Oman has struggled to diversify its economy amid lower oil prices. Sultan Haitham, in addition to being culture minister, was in charge of the country’s Vision 2040 program that lays out strategies to make the country less reliant on oil and gas exports for revenue. It states that 93% of economic activity should be fueled by non-oil sectors and calls for 42% of Omanis to be employed by private businesses rather than the public sector.

In Yemen, the Houthis, who are at war with Saudi Arabia and the UAE, described him as leader who worked to end the country’s 5-year-old conflict.

Over 10 Reportedly Killed In Myanmar Protests By NEW SPOTLIGHT ONLINE 2 hours, 51 minutes ago

Elections Is Just A Month Away: Alliance Is Making Is Making By Agencies 3 days, 1 hour ago

US Carries out Airstrikes In Syria By Agencies 3 days, 2 hours ago