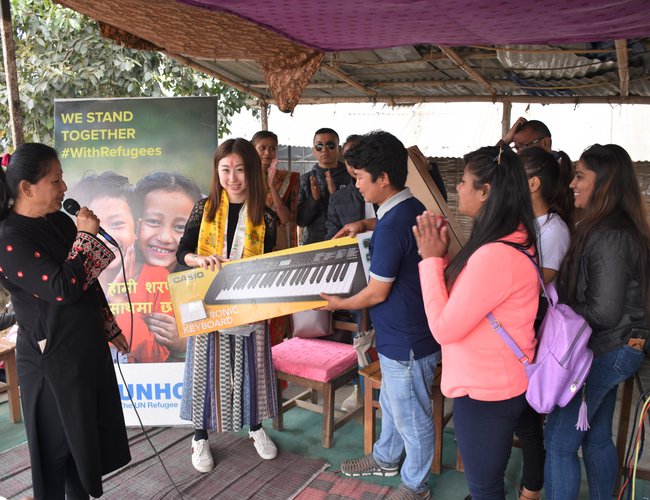 The air at Panchaoti English School in Beldangi refugee settlement in eastern Nepal was filled with excitement as hundreds of children clapped and sang to the tunes of a Japanese pianist last month In Damak, Jhapa

Ms. Yukako Yamana, an emerging Jazz pianist and a composer from Tokyo, was in Nepal on a week-long visit from 18 to 26 February 2020 to perform for the refugees and the host community children in various schools in Nepal.

“The visit to the Beldangi refugee settlement was an enriching experience,” said Yamano, while performing her concert at the school ground on 20 February 2020. “I am inspired by their smiling faces and happiness.”

More than 800 Bhutanese refugee children are studying in the Panchaoti School, the only remaining school inside the camp. From the new academic session in April 2020, all the students will be transferred to the nearby public schools.

During an hour-long concert, Yukako played different music on the piano as the children and teachers listened to her with curious eyes. The atmosphere soon turned into a festive mood as students and teachers danced and sang to the tunes of the popular Nepali music like ‘Resham Firiri’ and “Phool ko Aakhaama.” She was supported by the Bhutanese refugee band ‘Sangkha’ who played some Nepali songs bringing smiles and laughter to all.

“Performing for children gives me lot of positive energy. It is the best way to connect with them,” she said, as she took selfies and mingled with the cheering students after her concert.

Yukako received similar responses when she performed her concert for school children at Shree Gram Shikshya Mandir High School in Kapan, Kathmandu on 24 February 2020. Japanese drummer Funky Sueyoshi of the hugely popular band Bakufu Slump during the 1990’s in Japan, accompanied her and the duo gave an energizing performance.

The pianist has been travelling to various countries to perform for refugee children. In September 2019, she had her concert for refugees in Cameroon, upon invitation from UNHCR. Likewise, in May 2019 she traveled to Jordan and performed at Palestinian refugee schools.

Yukako had raised funds via crowdfunding in Japan for her trip to Nepal. She also donated musical instruments and sports materials worth Rs.200,000 (equivalent to USD 1,900) to the Bhutanese Refugee Children Forum (BRCF) in Damak and the Shree Gram School in Kathmandu where Rohingya refugee children are also studying.

Buoyed by her support, the Principal of Shree Gram School, Rudra Koirala announced that the school will manage a separate room for starting the music class for students in the near future.

“We are thankful for this pleasant support. The musical instruments will be put into best use by introducing a music class for students,” he said upon receiving various musical items including guitars, drums, cajon, tambourine and flutes among others.

UNHCR Representative Carolin Spannuth-Verma, during her meeting with the artist, expressed gratitude for her generosity and greatly appreciated her efforts to engage and connect with refugee and host community children through music.

As she wrapped up her tour in Nepal, Yukako said the trip had been a ‘memorable one’ and she hoped to continue her musical journey for refugee children across the world.

“I love to play for refugee children,” she said. “I want to make the world peaceful and happy with my music.” 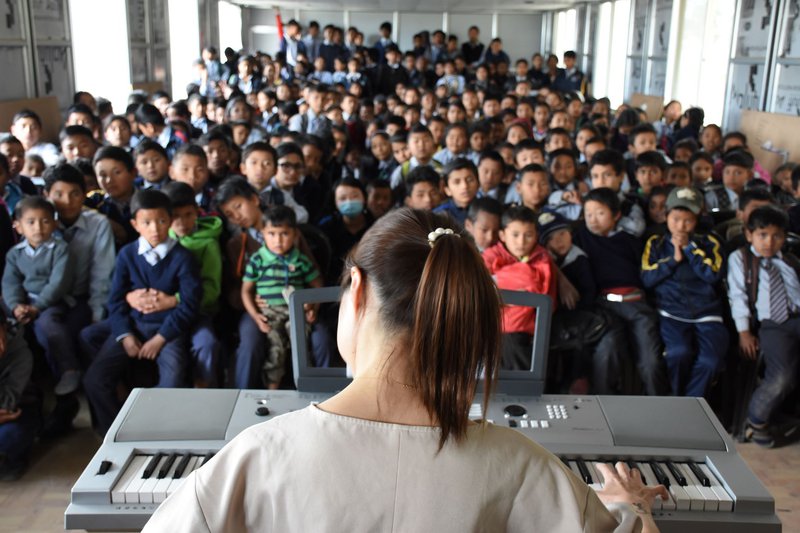 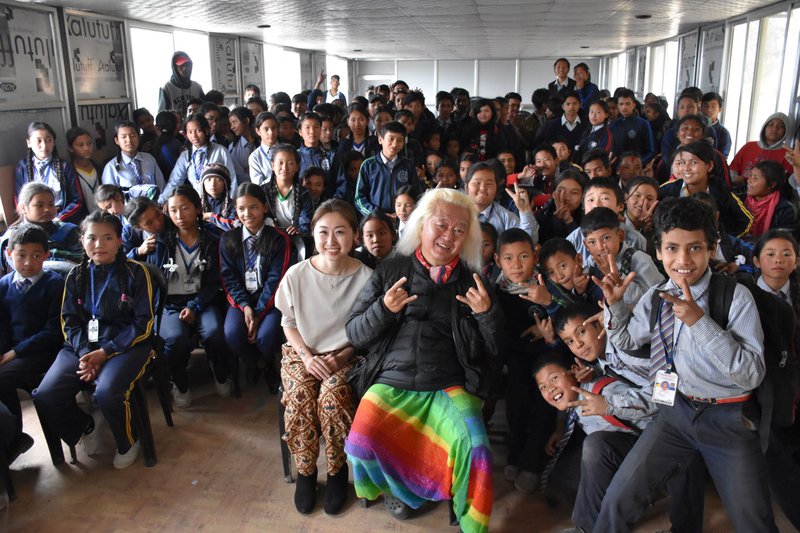 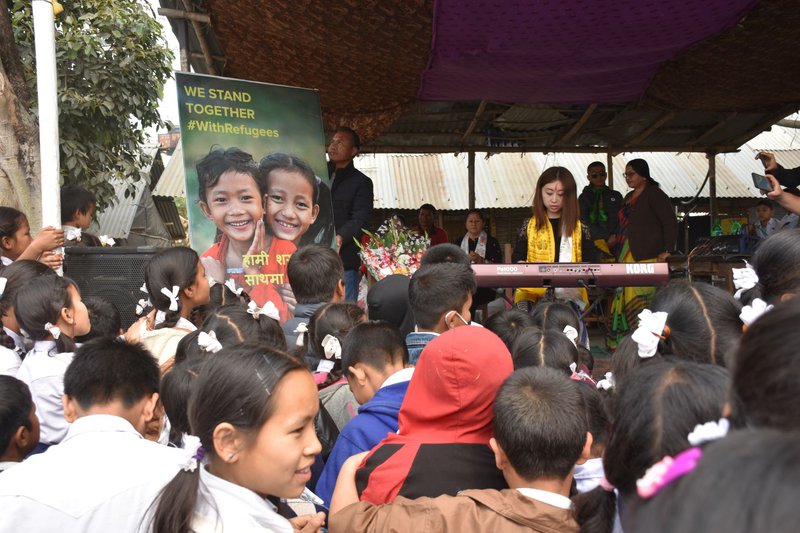 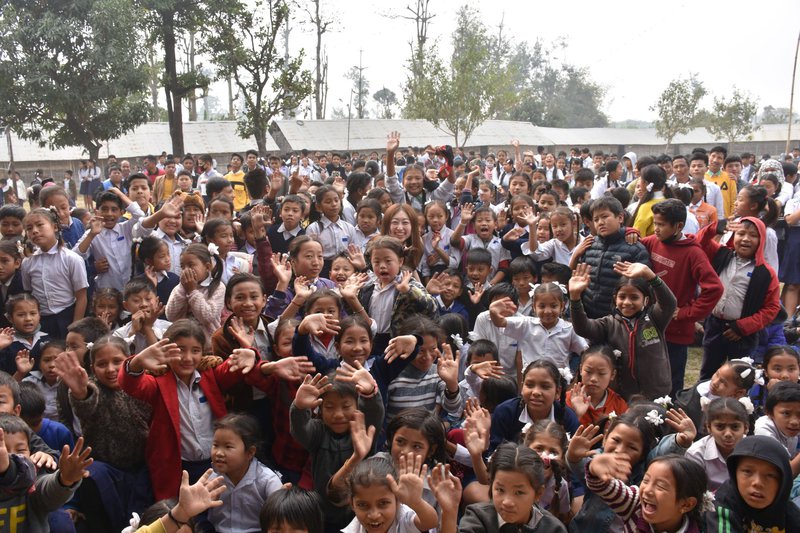 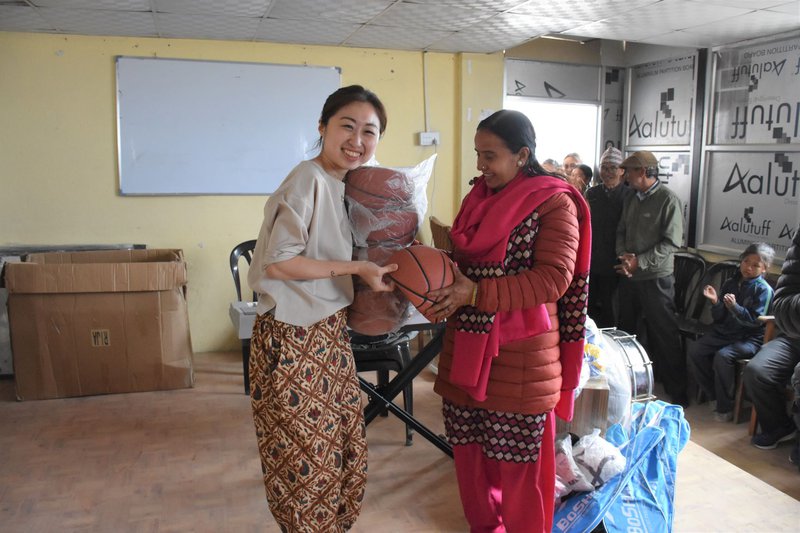 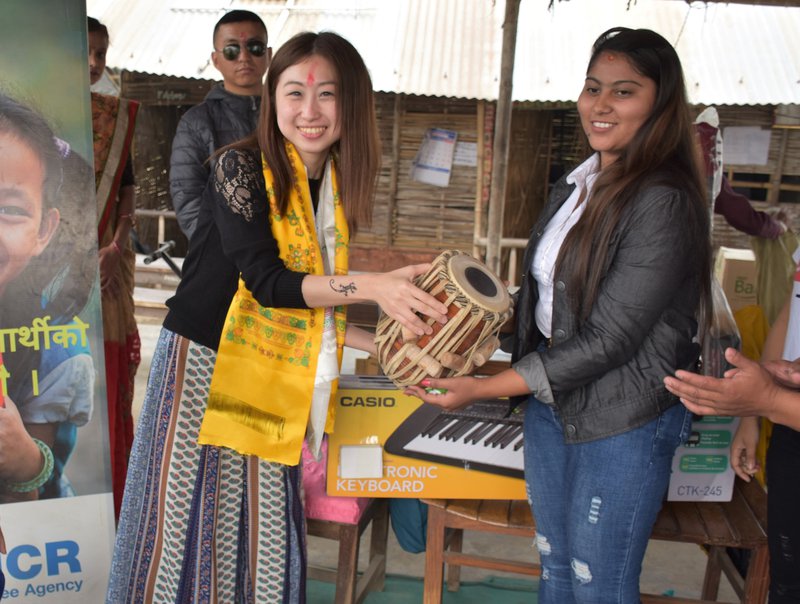