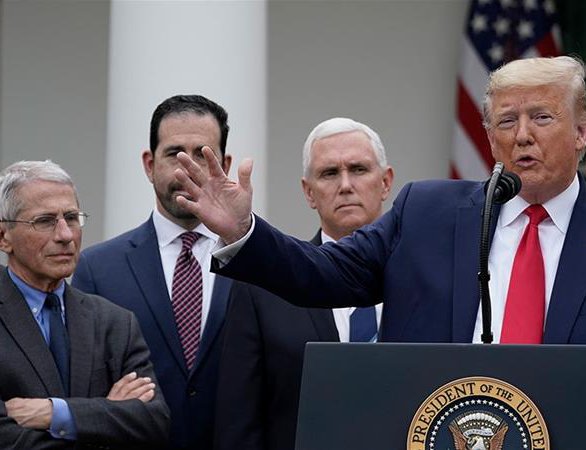 As the coronavirus pandemic tore deeper into the fabric of American public life, United States President Donald Trump declared a national emergency on Friday to provide more money to fight a pandemic that has killed 41 people in the US.

"I am officially declaring a national emergency," he said from the White House's Rose Garden.

The declaration of a national emergency, a rarely used presidential power, allows the Federal Emergency Management Agency to assist state and local governments and coordinate the nation's response to the crisis.

Trump said the declaration would free up to $50bn for state and local governments to respond to the outbreak.

Trump said he was also giving Secretary of Health and Human Services Alex Azar emergency authorities to waive federal regulations and laws to give doctors and hospitals "flexibility" in treating patients.

The move follows an unprecedented cascade of shutdowns this week, from sports events to museums and workplaces, that is aimed at limiting large public gatherings to help slow the fast-spreading virus.

From lack of testing to an initial downplaying of the threat, the Trump administration has faced harsh criticism over its response to virus.

On Friday, Trump announced that the US will "vastly increase" its testing capacity. Among the steps being taken was a public-private partnership to create drive-through testing options. Trump, however, said that US authorities do not want people to get a coronavirus test if they do not need it.

"It's totally unnecessary," Trump said. He added, "This will pass."

Trump said the administration planned to announce on Sunday night further details of the testing options, including a screening website where individuals could go to see if they should be tested and how to get tested.

A trough from this circulation is extending up to Bihar across Uttar Pradesh close to Nepal border, According to Meteorological Forecasting Division, thunderstorm accompanied with gusty winds/lightning is possible at some places in the country there are chances of light to moderate snowfall at some places of the high mountainous region.

Over 10 Reportedly Killed In Myanmar Protests By NEW SPOTLIGHT ONLINE 3 hours, 22 minutes ago

Elections Is Just A Month Away: Alliance Is Making Is Making By Agencies 3 days, 2 hours ago

US Carries out Airstrikes In Syria By Agencies 3 days, 2 hours ago