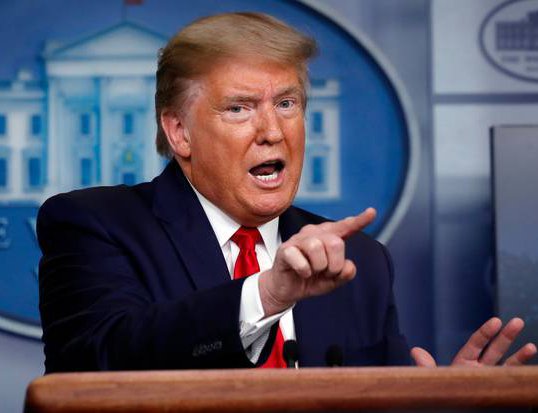 "The president of the United States calls the shots," Mr Trump said during a combative press conference in which he feuded with reporters. Nine states on the US East and West coasts are planning to lift strict stay-at-home orders. The US Constitution says states maintain public order and safety.

Legal experts say this means it is the responsibility of state governors to decide when the coronavirus-related restrictions get lifted.

The US has now recorded 682,619 coronavirus cases - four times higher than Spain, the next worst-hit country. America has also recorded 23,529 deaths from the pandemic, higher than Italy, which has the second-highest number of fatalities.

What did President Trump say?

Trump, a Republican, told the daily White House coronavirus briefing on Monday that his administration was finalising a plan to reopen the US economy, which has been largely shut down to slow the spread of the coronavirus.

But when journalists queried whether he had the authority to over-ride stay-at-home orders imposed on a state-by-state basis, Mr Trump said: "When somebody is the president of the United States, the authority is total.

"It's total. The governors know that." He added: "That being said, we're going to work with the states."

The president insisted "numerous provisions" in the US founding charter give him such power, without specifying which ones.

Asked by the BBC's Jon Sopel if he is concerned about the possibility of having to close the economy again if a second wave of coronavirus strikes, Mr Trump said: "I certainly hope that won't happen, but it does weigh on my mind."

He told reporters the number of deaths from the virus in the US had begun to plateau, indicating that "social distancing" efforts had succeeded.

But despite Mr Trump's framing of the decision as one Washington can make unilaterally, legal experts say the president does not have the authority to reverse a public health restriction put in place at the state or local level.

The White House has recommended Americans avoid restaurants and non-essential travel and keep in-person gatherings to 10 people or less until 30 April.

During the briefing, the White House played a video montage lambasting the media, touting the president's handling of the pandemic and clips of governors praising the Trump administration.

Several news outlets, which have been broadcasting the daily briefings live, quickly cut away.

State governors appear to be discussing plans to resume economic activity without seeking input from the Trump administration.

New York has almost 190,000 coronavirus cases and has seen more than 10,000 deaths - among the highest rates in the world.

But Governor Andrew Cuomo told a briefing on Monday he believed the "worst is over" for his state.

"If we continue to be smart," he said, "I believe we can start on the path to normalcy."

The western states of California, Washington and Oregon also announced plans for a shared approach to reopening.

Over a quarter of the US population live in the states on both coasts exploring reopening plans. More than 40 states have imposed state-wide stay-at-home orders for their entire population.

Globally, different approaches have been adopted to loosening lockdown restrictions. The Chinese province of Wuhan, where coronavirus was first reported last December, has partially reopened after more than two months of isolation.

Spain has allowed around 300,000 nonessential workers to return to their jobs.

Italy - the hardest-hit country in Europe - will allow a narrow range of businesses to resume operations this week.

In France, President Emmanuel Macron has announced the country's near-lockdown will extend until 11 May.

The UK government has said no one should expect any changes to its lockdown restrictions this week..

Rockets Rain On Tel Aviv As Violence Expands By Agencies 2 days, 19 hours ago

Concerns Rise Over Tensions In Jerusalem By Agencies 3 days, 19 hours ago