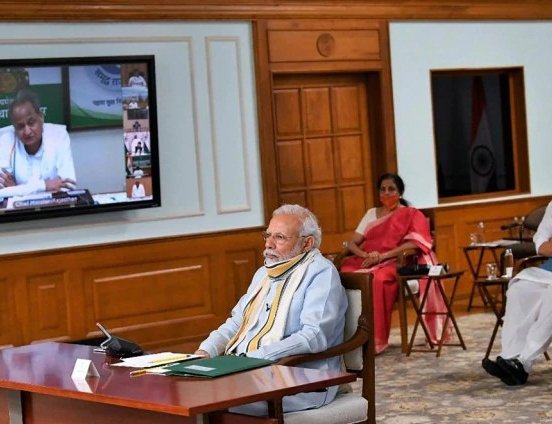 Prime Minister Narendra Modi told chief ministers on Monday that the country will have to devise a "balanced strategy" to deal with Covid-19 as India reported a record 4,213 cases in one day.

Interacting with chief ministers in a video conference, PM Modi flagged that problems have increased wherever social distancing norms were not followed or there has been laxity in implementation of the lockdown guidelines. He also said the biggest challenge will be to ensure that the infection does not spread to villages, sources said.

The new cases detected in the past few days include migrant workers who have returned to their native places from big urban clusters, many after being rendered jobless and homeless, as also some airlifted from abroad under a massive evacuation plan undertaken by the government for Indians and expatriates stranded in various countries reports India Today.

Economic activities in India are set to "gather steam", Prime Minister Narendra Modi told chief ministers on Monday, while asserting that the country will have to devise a "balanced strategy" to revive the economy and deal with Covid-19 with a sharp focus on ensuring that rural areas remain free from the pandemic.

In its daily update, the Union Health Ministry said the total number of confirmed Covid-19 cases has increased to 67,152 after a record number of 4,213 new cases were reported in the last 24 hours till Monday 8 AM, while the death toll rose by 97 to 2,206. More than 20,000 people have recovered also so far.

According to India Today, Maharashtra reported 1,230 new cases, taking the state tally to 23,401, while its death toll rose to 868 after 36 more fatalities.

Gujarat saw 347 fresh cases and 20 more fatalities, including 268 cases and 19 deaths in Ahmedabad itself. In the national capital also, more than 300 new cases were detected.

Fresh cases were reported from various other states as well including Punjab, Haryana, Kerala, Jammu & Kashmir, Karnataka, Bihar and Odisha.