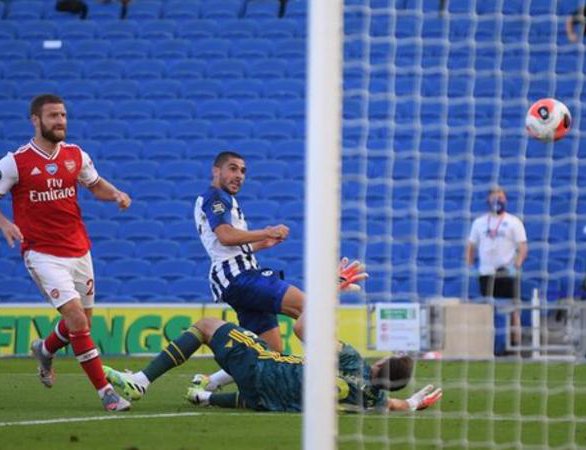 Neal Maupay scored the winner five minutes into added time as relegation-threatened Brighton clinched a huge win over Arsenal, who once again lost a key player to injury.

Maupay showed coolness and class to slot in his ninth and most important goal of the season to give Albion their first league win of 2020 and cap a remarkable comeback.

Nicolas Pepe had fired the Gunners into a deserved lead with a superb curling shot with just over 20 minutes to go, but Lewis Dunk scrambled an equaliser over the line from close range to set up a barnstorming finish.

Maupay's winner was a sucker punch for the Gunners, who have now lost back-to-back games since the Premier League returned - results that surely make a late run to Champions League qualification very unlikely.

Arsenal were shambolic at Manchester City on Wednesday, primarily because of a calamitous display from centre-back David Luiz who came on for the injured Mari, gifted two goals to the home side and was then sent off.

The Gunners were more solid in Sussex, returning more closely to the kind of form that had seen them go unbeaten in 2020 prior to their visit to the Etihad.

They were also more solid, with Rob Holding in the suspended Luiz's place. But this defeat will be more painful than that incurred three days ago.

They were the better side for much of it - more creative, more threatening and for 70 minutes at least, more assured.

Afghanistan Lose, India Out Of T20 World Cup And New Zealand Reaches To Semi By Agencies 3 weeks, 6 days ago

Nepal Reaches To SAF Final After 1-1 Draw Against Bangladesh By Agencies 1 month, 3 weeks ago