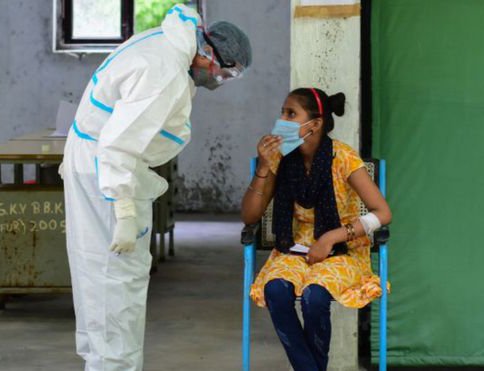 There are now over 14 million confirmed COVID-19 cases globally, with over 600,000 fatalities and more than 7.8 million recoveries, according to the latest tally from Johns Hopkins University.

India has the world's third-largest case load, after the US and Brazil - the only three countries so far to record more than a million coronavirus cases.

India's active cases account for about a third of its total tally as it has been reporting a high recovery rate and a low death rate from the virus.

But deaths have been rising. At 25,602, they are eighth-highest in the world.

India's number of cases has been on the rise - with nearly record daily surges - in recent weeks. It overtook Russia earlier this month to occupy the third spot for the highest number of coronavirus cases globally.

The COVID-19 outbreak in hard-hit Brazil has plateaued, the World Health Organization said Friday, urging the country to seize the opportunity to drive down transmissions. Brazil registered 34,177 new confirmed cases of the novel coronavirus and 1,163 new deaths on Friday. Total cases in Brazil have now risen to 2,046,328 while deaths to 76,688.

Iran, which has re-emerged as the hardest-hit country in the Middle East region, reported 2,379 new cases, bringing the total number of infections to 269,440. The pandemic has so far claimed the lives of 13,791 Iranians, up by 183 in the past 24 hours. A total of 232,873 coronavirus patients have recovered, with 3,509 still in critical condition.

Although India confirmed its first case at the end of January, the pandemic took hold slowly. Experts believe it was staved off to some extent because of an early decision by the government - in March - to stop all international flights and enter a strict lockdown that lasted nearly two months.

The western state of Maharashtra is still the biggest hotspot with the highest case count- more than 280,000 - among all the states.

Bangalore has entered a week-long lockdown amid a spike in cases. But potential new hotspots are emerging as states in the south - Karnataka and Andhra Pradesh - and in the east - Bihar, West Bengal - record a rapid rise in daily case numbers.

The best news for India when it comes to the coronavirus pandemic is the unusually low death rate.

Weather Update And Analysis For March 3 Across Nepal By NEW SPOTLIGHT ONLINE 22 hours, 35 minutes ago