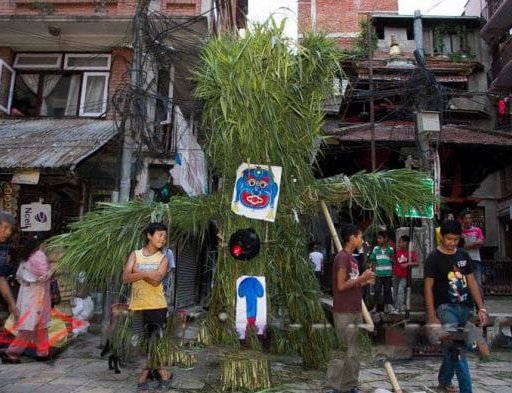 Newar Communities of Kathamandu valley erected the effigy in the centers of various areas. They look like a rough tent-like structure or effigy of demon Ghantakarna.

The effigy will be taken to the river and burnt to represent the victory of locals over the demon god. The festival of Gathemangal or Ghantakarna Chaturdasi, like most of the Nepali festivals, is an example of the victory of good over evil.

The festival of Gathemangal is celebrated in the memory of mythical demon Ghantakarna’s death. This festival that falls on trayodashi (third day) of the month of Shrawan (July/August) is also called Ghantakarna Chaturdasi.

According to the legend, a demon named Ghantakarna terrorized the villagers by stealing the children and women of the village. He used to demand money and other gifts from the villagers. His body was painted in red, blue and black and he wore a pair of bells on his ears. He looked very scary and every time he moved, the bells jingled. He got his name from the bells on his ears, i.e. Ghanta meaning ‘bell’ and Karna meaning ‘ears’.

The farmers were scared of him and seldom went out. Even during the season of the plantation, they did not dare to go out. They were helpless and disappointed. However, one day, a large number of frogs came to the village and began to croak near Ghantakarna’s place. He became furious but the frogs did not stop.

This legend is acted out in the form of a drama on the street as a part of the celebration during this festival. The children in each neighborhood collect money from the passerby to make an effigy of the demon god.

Kumar Shasti And Sithi Nakha 2021: The Birthday Of Kumar And The Day To Clean Up Water Sources By Agencies 3 days, 23 hours ago