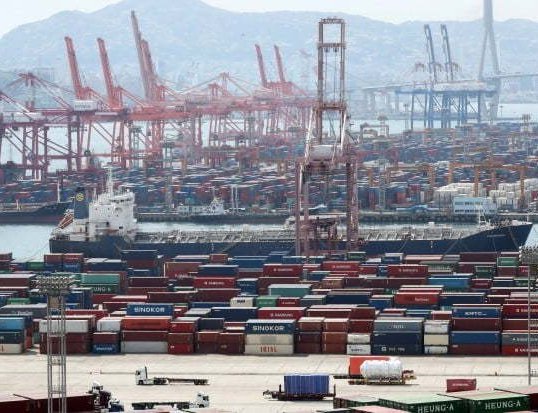 South Korea's economy contracted at a sharper rate than what had been expected in the second quarter, delivering the worst performance in over two decades, as the pandemic hammered outbound shipments and private spending in Asia's fourth-largest economy, central bank data showed Thursday.

In the April-June period, the country's real gross domestic product (GDP) shrank 2.9 percent from the same period last year, marking the slowest growth since a 3.8 percent on-year contraction in the last three months of 1998, according to advance data from the Bank of Korea (BOK).

From three months earlier, the local economy also contracted 3.3 percent, the slowest on-quarter growth since the first quarter of 1998, when it contracted 6.8 percent.

In the first quarter, the South Korean economy declined 1.3 percent on-quarter. However, on a on-year basis, the economy expanded 1.4 percent in the January-March period.

The BOK earlier anticipated the economy to shrink about 2 percent on-year in the April-June period, placing its annual growth outlook at a contraction of 0.2 percent.

"This was largely caused by a sharp drop in exports with the new coronavirus continuing to spread, unlike our expectation that it will likely slow down," said Park Yang-su, head of BOK's economic statistics office.

But BOK Gov. Lee Ju-yeol last week noted the South Korean economy will likely suffer a heavier than earlier anticipated blow this year due to the COVID-19 pandemic.

"When we offered our growth projection in May, we had expected the COVID-19 pandemic to begin slowing down in the second half of the year, but now we are in the second week of July, and the spread of the disease is rather accelerating," he told a press briefing last Thursday.

"And therefore, the recovery in our exports may further be delayed, in which case our economic growth cannot but also be affected," he said.

In its May projection, the BOK predicted the local economy to contract by as much as 1.8 percent on-year in 2020 under what it then called the worst possible scenario, highlighted by a global resurgence in COVID-19 infections.

It also marks the sharpest on-year decline in exports since the fourth quarter of 1974, when outbound shipments dropped 17.9 percent.Source: The Korean Herald

At Least 20 Demonstrators Killed In Myanmar By Agencies 8 months, 2 weeks ago

Japan To Tighten Restrictions On Arrival By Agencies 11 months, 1 week ago

Japan Grapples With Record-level Increase In COVID-19 Cases By Agencies 11 months, 3 weeks ago