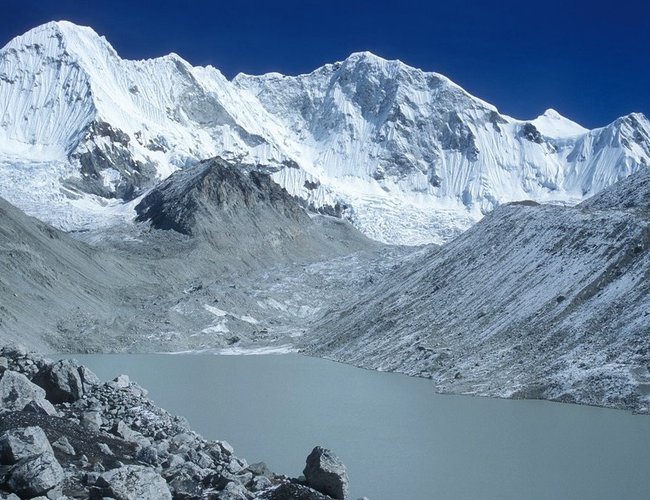 The International Centre for Integrated Mountain Development (ICIMOD) said Four glacial lakes in Sankhuwasabha are at higher risk of bursting. Among the 104 such lakes in the district, four lakes including the lower Barun glacial lake are at high risk reports Rastriya Samachar Samiti (RSS).

ICIMOD official Dr. Arun Bahadur Shrestha said the Lower Barun Glacial Lake that is below the Makalu base camp and the glacial lake at Bhatkhola rural municipality is at high risk of outburst.

The lower Barun glacial lake which covers an area of 1.9 square kilometers is 2.7 kilometres long and 600 meters wide RSS.

According to Dr. Shrestha, of the 5,353 lakes in Nepal, 20 are at risk of outburst. The settlements close to the downstream side are at risk due to the process of formation of new glacial lakes and the old ones bursting out in the Himalayas.

Stating climate change has posed challenge in the conservation of the Himalayas and the lakes, he underlined the need of collective action for resolving this problem.

Chief of the Sankhuwasabha District Coordination Committee, Suman Shakya, said the lower Barun glacial lake can be prevented from an outburst if the course of the Barun river could be diverted towards its old course. He called on all to forge coordination and take initiatives towards this end.

Shakya said the DCC Sankhuwasabha would always be at the forefront in any initiatives for disaster risk mitigation and management owing to the glacial lake outburst. He added that there is the risk of the Barun River draining in the lower Barun glacial lake as it was at a lower elevation from the river. It is said the outburst of this glacial lake would cause huge damage to life and property.

Manager of Arun Engineering Pvt Ltd, Isak Rai, who has returned after observing the glacial lake recently, said the depth of the lake should be measured and the excessive water drained out. Rai also stressed that the people living in settlements near the Barun and Arun rivers should be alerted on the risk of glacial lake outburst flood in their areas.

Settlements near the rivers in Sankhuwasabha, Bhojpur, Dhankuta and Sunsari would be at high risk in case of this glacial lake's out bursting. ICIMOD has underscored the need to alert the people of these settlements.

According to ICIMOD officials there are more chances of glacial lake outburst taking place in this season due to the rapid snow melting and high volume of water in the glacial lakes and rivers.

According to RSS, the record shows that 21 incidents of glacial lake outburst flood have taken place in Nepal. It shows that the glacial lakes have burst between March to September in the past.

HOTEL ANNAPURNA Shut For Now By A Correspondent 3 weeks, 4 days ago