Presenting his first Monetary Policy in the most difficult time, Governor of Nepal Rastra Bank Maha Prasad Adhikary has focused on stability of the banking sector 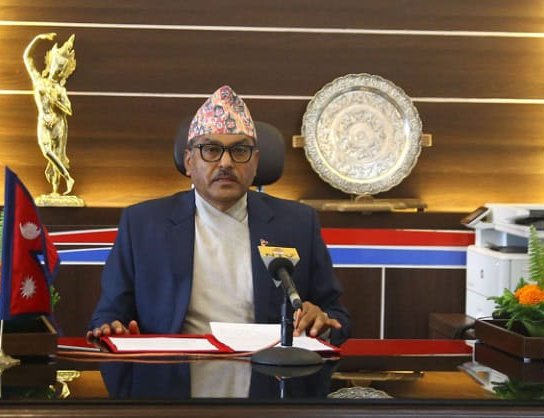 As it is said experience always matters, one can see this happening in the newly released Monetary Policy 2020, which is said to be realistic in approach and optimistic in strategy.

As the country has been passing through a very crucial phase of economic debacle, governor Adhikary has used his skill and experience to produce very realistic documents.

Unlike his naïve predecessor Chiranjibi Nepal, who spent his four years in shaking the banking system, Adhikary’s agenda is to stabilise the system. This is what his new monetary policy is all about.

At a time when Nepal’s banking sector, which is key to future economic growth and economic stability, has been passing through a very crucial period, the new monetary policy focuses on the stability of the sector.

The policy addresses the issues related to the loanable funds crunch and credit growth, among others. As industrialists have been trying to push pressure on the banking sector, governor Adhikary announced the new policy in a balanced way.

Thus, the private sector players have taken the measures taken by the central bank positively.

These are some of the key concerns the monetary policy has tried to address in the banking sector. As per the policy, it is mandatory for the commercial banks to issue debentures/ corporate bonds amounting to 25 per cent of their paid-up capital by fiscal end.

Announcing the new monetary policy, NRB has also reduced the maximum interest rates on loans, floated under the general finance fund of NRB that BFIs can take, to 7 per cent from 8 per cent. Financing loans of up to Rs 1 million will be issued to the BFIs on the back of good loans at 3 per cent interest rate against five per cent last year.

However, the BFIs cannot levy more than 7 per cent interest to SME borrowers on such loans. The central bank has also brought down the interest rate on general financing loan to 3 per cent from 4 per cent and, has also reduced the bank rate to 6 per cent from 6.5 per cent. The policy has made it mandatory for micro-finance firms to disburse one-third of their total loans in the agriculture sector to raise the credit flow in it.

The central bank has also told the BFIs to bring the spread rate to 4.4 per cent by mid-July 2020, as envisaged by the Financial Sector Development Strategy. This will greatly help reduce the interest rates on bank loans.

Allaying fears that the central bank would adopt a policy of “forced merger” of the financial institutions, the policy has made it “optional”. The NRB has, however, offered incentives to banks for the merger. The merged banks will not have to take approval of the NRB to expand their branches either.

As per the new provision, the banks will now require investing 15 per cent of their total loan portfolio in the agriculture sector and 10pc in the energy sector. The banks will be allowed to issue energy bond refinancing loan facility for Small and medium-sized enterprises (SMEs) at 2pc.

The central bank has revised CCD ratio, which it considers the anchor of Nepal’s financial sector stability, to 85% from 80%. The latest revision will enable BFIs to release an extra Rs 183.3 billion in loans, considering total deposit of Rs 3,666.6 billion in the banking sector.

“Our demand was the ‘3R’—Reduce, Refinance and Restructure the loans—that the monetary policy has largely sought to address,” said Saurabh Jyoti, chairperson of the bank, finance and insurance committee at the Federation of Nepalese Chambers of Commerce and Industry, the apex private sector body.

It has permitted banks and financial institutions to extend further loans to industries and businesses affected badly by the pandemic by 20 percent of the working capital maintained at mid-April.

“The monetary policy has addressed most of our demands vis-a-vis rescue and revival of the businesses [in the wake of Covid-19],” said Chandra Dhakal, vice-president of the Federation of Nepalese Chambers of Commerce and Industry, the country’s apex private sector body. “It has also introduced a policy to take care of small and medium enterprises, which have been badly affected by the pandemic.”

The service industry—particularly the tourism and aviation sectors, and micro, small, and medium-scale enterprises—is among the worst hit by the pandemic, which had taken 40 lives and infected over 17,000 Nepalis as of this writing.

Binayak Shah, vice-president of the Hotel Association of Nepal, said the monetary policy has put in place some packages to address the crisis in the tourism sector, but it needs a prompt implementation.

“The allocation of Rs 50 billion as a refinancing fund at 5 percent interest rate could be a big relief for the sector,” said Shah.

Bhuvan Dahal, president of Nepal Bankers’ Association, said the monetary policy has sought to address the concerns of all sectors.

“Our concerns with regard to provisioning have been addressed,” said Dahal. “It, however, would have been better if the central bank had not fixed the fee to be charged by the banks on various services.”

Governor Adhikari has said that the monetary policy of FY 2020/21 was focused on minimising the effects of COVID-19 pandemic on the economic regime of the nation.

Making the nation’s monetary policy public, Adhikari said that the loan would be provided to airline services, hotel, restaurants and other businesses in the tourism sector.

Digital banking, fintech, and digital payments have received a special mention in this year’s monetary policy document. Unveiling the monetary policy, Governor Adhikari said that the adoption and growth of mobile banking has made banking transactions smooth even in this lockdown period. He further mentioned that COVID-19 is an opportunity to promote fintech and digital transactions in Nepal.

Unveiling its monetary policy for the fiscal year 2077/78 in the capital, the central bank said that the limitation on vehicle and auto hire purchase loans will be the same as last year, i.e., a person buying a private vehicle will have to make a down payment of at least 50 percent of the vehicle price. NRB has barred banks and financial institutions from extending auto loans that amount to more than 50 percent of the vehicle’s price.

The World Bank To Provide US$ 45 Million To Promote Sustainable Livelihoods By NEW SPOTLIGHT ONLINE 5 days, 13 hours ago