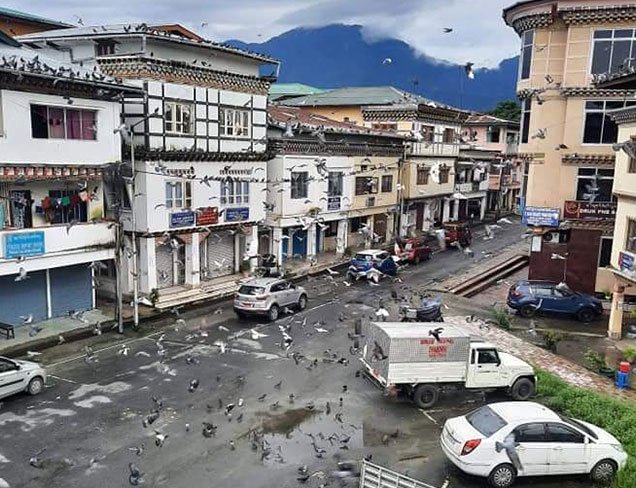 As words of the nationwide lockdown spread in the early hours yesterday, many left the capital city and headed for their homes in other dzongkhags. Similarly those in the neighbouring dzongkhags rushed back to the capital as the government announced travel restrictions. With this, Bhutan’s COVID tally reaches to 110. Kuensel

The Prime Minister’s Office announced on its Facebook page that the government was declaring a nationwide lockdown. A 27-year-old woman who completed quarantine and was released after testing negative has tested positive a fortnight since her release.

She had returned from Kuwait on June 26 and was placed in a mandatory quarantine facility in Paro. She tested positive for Covid-19 on August 10 in Gelephu.

The woman tested negative five times between June 29 and July 25 on PCR even after testing positive on the rapid test (IgG). In keeping with the health protocols, she reported to a flu clinic in Gelephu on August 10 where she tested positive on RT-PCR.

She was immediately isolated at the Covid-19 centre, while contact tracings were initiated right away. A total of 97 contacts were traced as of 5:20am

The country went into lockdown to trace all those who came into contact with the woman. Prime Minister Dr Lotay Tshering said that community transmission could not be ruled out.

At a press conference late yesterday evening, Lyonchhen said that His Majesty The King was relieved that Bhutanese across all dzongkhags despite the sudden lockdown adhered strictly to the lockdown conditions on the first day of nationwide lockdown.

PM urged all Bhutanese to wear face masks to be safer from the Covid-19 infection.

Lyonchhen said that the lockdown was likely to continue up to a week and that it would depend on test results of those who came in contact with the woman who tested positive.

The Prime Minister was on the radio, speaking in multiple dialects, spelling out details of what people are required to do and how those needy could get help. Ministers were on the national television sharing information on how those across the border could enter the country legally.

The economic affairs ministry ensured that there is adequate stock of essentials items in the country (rice, oil, pulses, sugar, milk powder, salt, toiletries, etc.) to last for another six months. Respective dzongkhags have their own Standard Operating Procedures (SoP) for distribution of essential items. All 20 dzongkhags have their required stocks as far as at gewog level.

Individuals were caught up in multiple situations. As travels came to halt, some were caught halfway through the journey, while others were stranded in neighbouring districts they had visited for official duty or leisure.

Truckers were fixed in hotels they had parked for the night. Public transports and private cars were stuck in transiting districts. Traffic police made exceptions and let them pass on a case-by-case basis.

“But such is the inherent feature of the much dreaded lockdown. To immediately break the chain of transmission, during which the government will identify and isolate suspects for further medical investigation, one has to stay where you are,” the Prime Minister’s Office wrote on its official Facebook page.

As the lockdown came in full force, agencies facilitated public transports to complete journeys and assisted critical cases like transporting a body to cremation ground.

“But for now, we request you to put up with the inconvenience, make a little adjustment and help us in fulfilling the spirit and purpose of lockdown. For others, if there is a way for you to help those commuters stranded in your community, please do so,” the press release stated “Together, let us overcome this phase as soon as possible.”

The economic affairs ministry informed that there was adequate stock of essentials items in the country to last for another six months. The ministry stated that all dzongkhags have their required stocks as far as at gewog level.