Bhutan Organizes Religious Ceremony To Contain The Spread Of Covid-19

Bhutan Organizes Religious Ceremony To Contain The Spread Of Covid-19 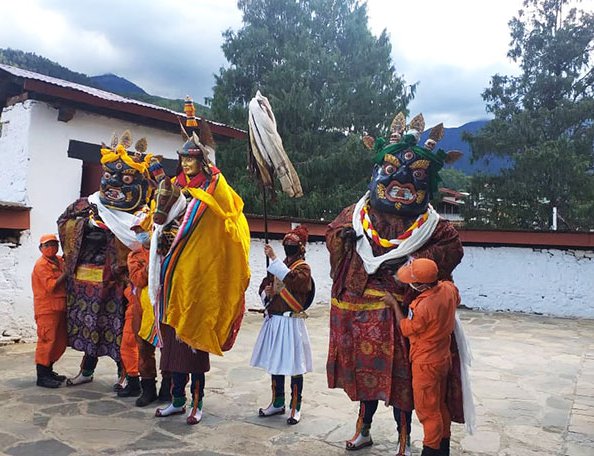 To complement the government’s efforts in containing the Covid-19 pandemic and help minimize further risks, the religious institutions across the country are performing a three-day Lhamo Bakchog kurim ceremony.Link

The sacred ceremony, which began yesterday, to appease one of the country’s protecting deities, Palden Lhamo or Mahakali is being performed on the directive of the Zhung Dratshang (Central Monastic Body).

The former general secretary of Zhung Dratshang, Lopon Gembo Dorji, said that Lhamo Bakchog is a ritual service or offering made to the Goddess Mahakali and her retinues. Her image or replica is made and all possible offerings laid in front.

“Thus, they are fully satisfied and withdraw all diseases and calamities,” he said.

Tsugla Lopon Samten Dorji said that given the difficult situation Bhutan is facing today the central monastic body has directed all the dratshangs and religious institutions to conduct this special kurim to help pacify the spread of the Covid-19 pandemic in the community.

He said that such a religious ceremony is performed only during a crisis.

The other reason for conducting the kurim, according to Lopon Samten Dorji, is to appreciate and offer the deepest gratitude to His Majesty The King, government and all those individuals who are engaged in the efforts to combat the Covid-19 pandemic.

According to Bhutan's largest paper Kuenel, in Nangkhar Dordhen Monastic School, Trashiyangtse, Lam Rinchen Drakpa along with 20 monks are reciting the holy scriptures of bum, Kangyur and Sangay Moenla zing ngag to overcome the pandemic in the country.

This is the second religious ceremony the Zhung Dratshang initiated to avert the spread of Covid-19.