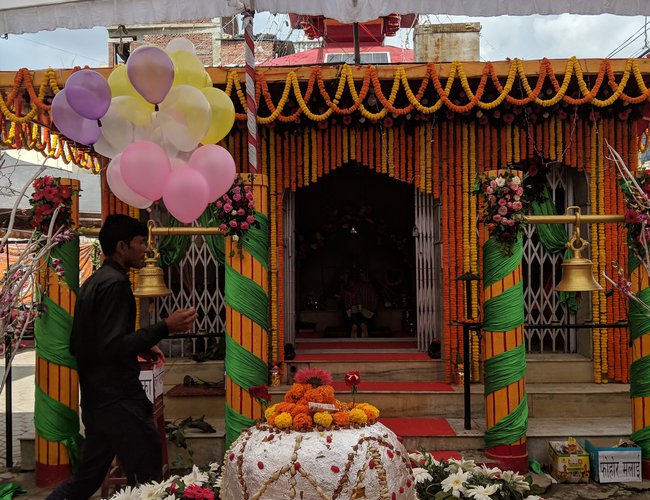 Ganesh Chaturthi is known as (Cha: Tha Puja) among the Newar community of Kathmandu Valley. The festival is celebrated every year on the fourth days of the bright fortnight in the month of Bhadra Shukla Chaturthi according the lunar calendar.

Ganesh is one of the most popular deities of Nepal worshipped by Hindus and Buddhist both. Ganesh is the god of good luck and success. He is very wise but looking very child like in appearance. A tradition has it that small boy in Nepal as Ganesh and small girls as Kumari (vestal virgin) are worshipped with great respect and love. This is very common here on important religious occasion.

Newar Commuity celebrates the day as Cha Tha (च: था). There is a very interesting local folklore about the day. According folklore, one day all the gods had assembled at papal tree to make fun. All the gods rode the tree speedily reach at the top. However, Ganesh, who has a big stomach and trunk, rode bit by bit in a ride of small rat. When moon god saw his style his body, he laughed making his style fun. Looking all this, Ganesh was angry with Moon who ridicule him with a false pride of beauty and smart. Angered by Moon’s behavior, lord Ganesh immediately cursed him with the words, “who sees you in the night should become a thief so that light from your source of light does not fall on you. All the gods disappeared fearing the consequences of curse of Ganesh knowing that after seeing the moon became a thief.

All the gods including Moon prayed collectively to angry Ganesh and plead him seeking apology for the mistakes. Later on Ganesh agreed to withdraw his curse. But, Ganesh said he could not withdraw the curse completely. He further said that the moon had to face the consequences of curse one day every year. Ganesh added that this is necessary to remove false pride about the moon. This is why there is a belief that those who see the moon on this day become a thief. Thus, no one should see the moon on the day of Ganesh Chaturthi.

Unlike other parts of world, Newar communities have their own way to celebrate Ganesh Chauthi. There is a practice of worshiping the moon on this day. It is belief that worshiping the moon this day helps to free of false accusation. People worship the moon after sunset with offering ginger, pear bens, soya beans, cucumber, roasted corn, ground nut, wheat, chick peas, almond and others in green leaves.

Swasthanibrathakatha To Conclude Today By Agencies 4 days, 7 hours ago