Britain’s medical regulator will be able to grant temporary authorisation for any coronavirus vaccine that meets safety and quality standards but before it has received a full licence, under new plans set out on Friday.

The government said that under its proposals the Medicines and Healthcare products Regulatory Agency (MHRA) would be able to grant this status to a vaccine while it underwent the full licensing process, with reinforced conditions to ensure safety.

The move, described as a last resort in the case of a strong public health justification, means the national regulator will be able to act this year if a vaccine arrives, before Britain has fully left the European Union on Dec. 31.

Normally the European Medicines Agency grants a licence for members of the bloc. The MHRA will have a licensing system in place from 2021.

“The proposals consulted on today suggest ways to improve access and ensure as many people are protected from COVID-19 and flu as possible without sacrificing the absolute need to ensure that any vaccine used is both safe and effective,” England’s Deputy Chief Medical Officer Professor Jonathan Van-Tam said.

The government said it had launched a consultation to discuss the proposals and that it could be in force by October, ahead of the winter flu season. The proposals will also allow more healthcare workers to administer vaccines.

Britain has one of the highest death tolls in the world from COVID-19 and one of the worst economic contractions of any major country.

Like many others, it is pinning its hopes on a vaccine to help bring the pandemic to an end. One of the leading candidates is from the University of Oxford and AstraZeneca, which believes that trial data could go to a regulator this year.

Nepal To Receive 100,620 Doses Of Pfizer Vaccines from US By NEW SPOTLIGHT ONLINE 1 day, 18 hours ago 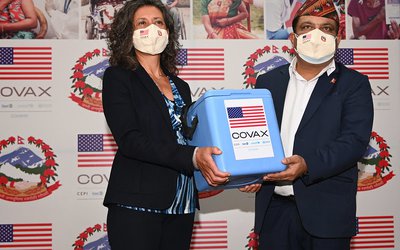