Italy Defeats The Netherlands By 1-0 In Nations League

Italy Defeats The Netherlands By 1-0 In Nations League 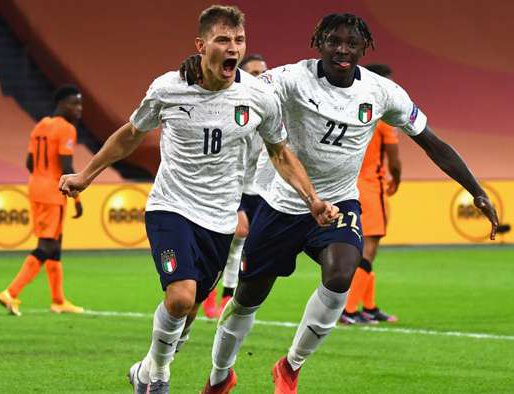 Italy saw off the Netherlands 1-0 in Amsterdam to go top of their Nations League group, with Nicolo Barella getting the goal.

Italy moved top of Nations League Group A1 with a deserved 1-0 win over the Netherlands in Amsterdam on Monday.Goal

Nicolo Barella powered in a header in first-half injury time to secure all three points for Roberto Mancini's men, who were held to a 1-1 draw by Bosnia-Herzegovina on Friday.

The Netherlands, still looking for a replacement for former head coach Ronald Koeman, managed only three shots on target throughout a rather blunt display at the Johan Cruijff ArenA.

Memphis Depay, heavily linked with a potential move to Barcelona to work under Koeman, was largely isolated and unable to affect the Dutch attack as Italy made it six games unbeaten against the Oranje.

25 - Manuel #Locatelli is the 55th player fielded by Roberto #Mancini since his debut as Italy's manager and the 25th to debut with the Italian National Team under the current Italy's manager. Launch. pic.twitter.com/ZU6KIHbfyC

Barella had forced Jasper Cillessen into a good save 27 minutes into a rather quiet first half in which Italy, who handed Manuel Locatelli his debut, lost Nicolo Zaniolo to injury.

Gianluigi Donnarumma denied Donny van de Beek an equaliser early in the second half, the goalkeeper acrobatically tipping over a first-time strike from the new Manchester United signing.

Italy threatened on the break but could not extend their lead, although Donnarumma was mostly untested behind an imperious defensive display.

The Azzurri have four points from two games, one more than the Netherlands, who began the latest Nations League group stage with a 1-0 defeat of Poland.

Monday's game showed why they need to find a suitable replacement for Koeman sooner rather than later, as Italy continue to show signs of progress under Mancini.

Much of Depay's lack of openings was down to him being marshalled superbly by Giorgio Chiellini, who made eight clearances and four interceptions - the most of any Italy player.

The Oranje defence looked susceptible to the counter-attack throughout and one positive run from Barella gifted him a free header as Ake stood idly by. The new Manchester City signing later left the pitch with an apparent hamstring problem.

The Netherlands face Mexico in a friendly on October 7, four days before their next Nations League clash with Bosnia-Herzegovina. Italy host Moldova before heading to Poland on the same matchdays.