Chief of Army Staff General Purna Chandra Thapa , who has completed his two years in office, has reasons to defend the work and duty performed by Nepal Army in various sectors 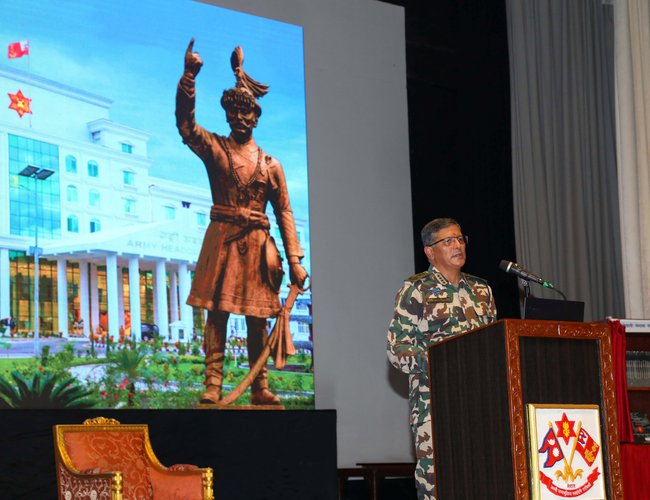 COAS General Thapa has shown that he knows the art of expressing displeasure politely. In his recent interaction with editors of selected media on September 9 at Nepal Army Headquarters, he politely explained the harsh questions asked about Nepal Army.

In the last few years, different media persons and houses, knowingly or unknowingly, intentionally or unintentionally, with their own views or under the influence of others, have been portraying the Nepal Army’s programs dedicated to the welfare of the army personnel as the army’s business venture. Even Nepal Army’s contributions in opening the education institutions for excellence are coming under criticism.

Although the interaction program was organized to share the progress of work over his two years in office, COAS General Thapa spent a substantial time to explain the disinformation and misinformation against Nepal Army’s schemes and programs launched for the welfare of Nepal Army personnel.

The issue of Nepal Army’s Welfare Fund, its savings and some activities carried out through it have been in media criticism for a long time. However, the government ministers and civilian authorities, who are supposed to defend the army, have ignored it, leaving the army to clarify it from time to time through press conferences and media releases.

As civilian authorities and ministers responsible to defend the institution do not come out publicly, COAS General Thapa himself had clarified on the use of deposit accumulated in the Welfare Fund and its role in depth.

“All the organized and professional armies around the world have their own kinds of welfare programs and Nepal is not an exception. Through limited saving accumulated through our own contributions, our Welfare Fund has been providing basic support in health, education and livelihood to retired and serving personnel,” said COAS General Thapa. He said bluntly that Nepal Army is not doing any business or is willing to do so in the future. What we want is to help our families of over 800,000 at the time of need. 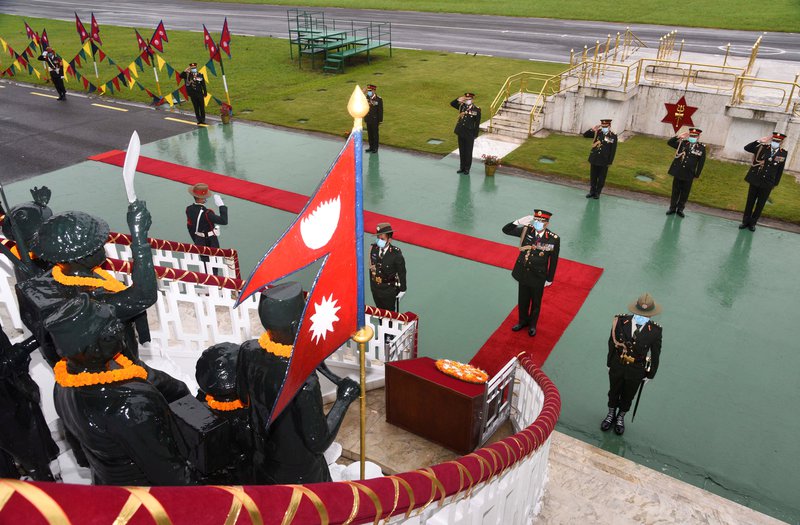 With its limited saving collected in Army’s Welfare Fund through contributions from UN Peacekeepers, Nepal Army has been launching various programs to support almost a million retired and serving families in need of education, health and income-generating activities.

“Armies around the world have various systems to start welfare. Along with Welfare Fund, we have been launching welfare programs through Nepali Army Wives Association as well,” said COAS Thapa. “Kindly understand, we don’t have any intention and aim to go for commercial ventures and we don’t have any intention to make a profit out of it. This is a purely welfare-oriented program.”

In the name of defending the institution, some media houses have been regularly running fabricated opinions, news and analyses aimed to damage the institution and its credibility. Despite the refusal of the Nepal Army, media mayhem continues.

Interestingly, the government, which is supposed to take a stand on the institution, prefers to remain silent. Just within a couple of days, following taking the post of COAS, General Thapa directed to stop the process to rent its officer clubs and other venues for the public.

“Nepal Army is ready to defend the country and it is our constitutional duty to protect national sovereignty. We also need to provide some welfare schemes to our soldiers and officers who work tirelessly living in separation from the family. As chief of the force, it is my duty to look after our soldiers along with taking actions against those involved in corruption and other such activities,” said COAS General Thapa.

He said that the Nepal Army is a professional organization that evolved from the inception of national unification. COAS General Thapa has made it clear that Nepal Army does not have any thirst for business or for increasing involvement in commercial activities.

During his two years, Nepal Army has continued to be at the forefront of supporting various activities including constructing the fast track. As the country has been facing the COVID-19 crisis, Nepal Army is working in the frontline.

Whenever a major national crisis emerges, Nepal Army’s work has always been at the forefront. As the country has been facing a major crisis to manage the COVID-19 and protect the citizens, the government has mobilized Nepal Army to perform the most difficult part of the work.

Along with managing quarantine, isolation and helping in testing in the early days, the Nepal Army has been given the most difficult task of managing the dead body safely and sensibly while respecting the traditions and practices.

As COAS General Thapa was completing his two years last fortnight, he had spent almost seven months to prepare and implement the emergency plan to contain the COVID-19 pandemic. As a member of the Crisis Management Center (CCMC), COAS General Thapa has been attending the meeting regularly.

Following the start of the monsoon in June, Nepal Army also has performed rescue and rehabilitation missions during the landslides and floods.

With just over 90000 forces, Nepal Army has been fulfilling all its major responsibilities, constructing the roads in remote areas of Kalapani, fast track and other several roads, protecting national parks, providing security to vital national installments and VVIPs, providing troops to UN Peacekeeping and remaining alert to defend the border.

As the Chief of the institution, COAS General Thapa has been busy looking at all these works along with implementing his policy of institutional reforms.

Whether it is a difficulty caused by landslides, floods, fires, or national disasters of any kind, including the recent COVID-19 Pandemic, Nepal Army has been in the frontline to deal with it.

In other countries of the world, the Army rarely speaks publicly on its duties and functions. Concerned civilian authorities, ministers and political leaders immediately respond to reactions against the Army.

There is a reason behind this. The institution of army spends the entire time defending the nation, for national security and to perform humanitarian missions like rescue and rehabilitation during disasters and launch must difficult development works including the road-building in remote regions.

Nepal Army is also no different in pursuing such duties remaining all the time alert and ready to mobilize its forces in all kinds of emergency. However, what is different in Nepal is the rare recognition from the authorities regarding the role of the Nepal Army.

In our neighboring countries, ministers, civilian bodies, political leaders and others defend the institution of the army against any criticism. In Nepal, along with defending the country and pursuing all its responsibility, the Nepal Army has to come to the front to defend its own role and work as well.

Article 267(1) of the Constitution of Nepal 2015 says that there shall be an organization of the Nepal Army in Nepal, which is inclusive and committed to this Constitution, for the safeguarding of independence, sovereignty, territorial integrity and national unity of Nepal. 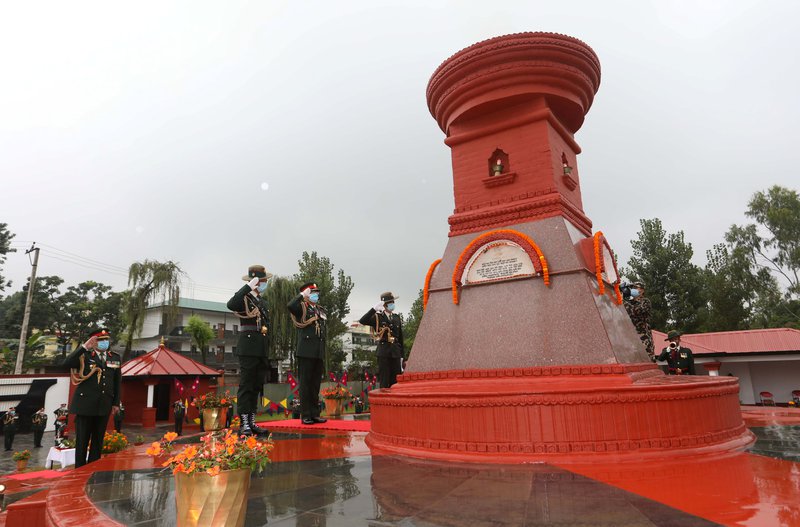 Article 267(4) says that the Government of Nepal may also mobilize the Nepal Army in other works including development, construction and disaster management, as provided for in the Federal law.

Over 90000-strong, Nepal Army has been performing two of its major roles as per the decision of the government even at a time when no concerned minister, political leader and other civilian body has come to defend the work and support the tender by Nepal Army,

At the function, he spared all his two hours with the media to defend the glorious history of the Nepal Army and its contribution in nation-building and all-round development.

Nepal Army is a leading security institution of Nepal, which grew up side by side with the national unification process, defending national integrity, sovereignty and getting involved in the national development process and humanitarian work of defending the people. However, the Nepal Army rarely finds anybody who defends the institution in recognition of the contributions made by it. Nepal Army’s soldiers are defending ministers and prime ministers, giving them security with high alertness. However, the Nepal Army has to come to defend itself all the time.

From making the army transparent, accountable and zero-corruption tolerant, COAS General Thapa has brought a lot of changes in the institution over two years since he assumed office.