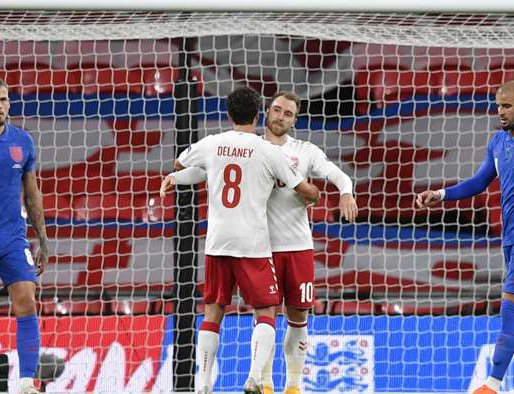 Christian Eriksen scored the only goal after Harry Maguire was sent off, giving Denmark a 1-0 win over England at Wembley.

Having come from behind to beat Belgium 2-1 at the weekend, Gareth Southgate's side immediately ceded top spot in Group A2 as Christian Eriksen scored the only goal with a 35th-minute penalty.

It was the third spot-kick England have conceded in four Nations League matches this season, by which point Maguire had already accrued two rash bookings to earn their second red card of the campaign - full debutant Reece James joining that list of ignominy after being sent off for dissent after the final whistle.

Mason Mount came closest to an equaliser from Declan Rice's 66th-minute corner, only for Kasper Schmeichel to produce a remarkable save.

Denmark started brightly and Kasper Dolberg had an eighth-minute attempt from Eriksen's clever low corner deflected into the side netting by Kalvin Phillips.

England struggled to create clear openings, although Harry Kane's touch deserted him in front of goal on the end of Mount's lay-off.

Southgate would rue that chance slipping away as his team imploded just after the half-hour mark.

Maguire was arguably fortunate to stay on the field after his reckless early lunge on Yussuf Poulsen and referee Jesus Gil Manzano had little choice when the Manchester United captain's heavy touch led to him careering into Dolberg.

By the time Dolberg hobbled out of the action, Eriksen had slammed home from the spot after Kyle Walker was harshly penalised for impeding Thomas Delaney.

The Leicester City goalkeeper was similarly sharp to tip over a rasping free-kick from James 12 minutes from time, although he needed the help of a goal-line clearance by captain and cap centurion Simon Kjaer to frustrate Conor Coady in the final minute.

It seemed churlish to complain over the less impressive elements of a win over Belgium - the number one ranked team in the world - but Southgate's side once again showed plenty of room for improvement.

Even before Maguire's dismissal they carried negligible attacking threat. Despite the talent in their ranks, this is the third of four Nations League matches where they have failed to score from open play.

After his holiday ordeal and court case in Greece - a matter still pending a retrial following an appeal - and a ragged start to the Premier League season with a shambling Manchester United, Maguire badly needed this international sojourn to go off without incident. It was not to be.

His red card was, frankly, awful and he became the third England player in history to be sent off at Wembley entirely due to his own incompetence. The player who shone on the way to the 2018 World Cup semi-finals, becoming a cult hero in the process, is a fast-fading memory. These are tough times for the most expensive centre-back in the world.

Back at a ground he called a temporary home while at Tottenham, Eriksen purred during the opening stages and helped Denmark dictate terms to a ragged England. The match-winner had more shots and attempted more key passes than any other visiting player.

England travel to Belgium in their penultimate group game next month, while Denmark entertain Iceland on their return to Nations League actionFor detail goal