Rapid Vienna 1-2 Arsenal: Aubameyang To The Rescue After Leno Howler

Rapid Vienna 1-2 Arsenal: Aubameyang To The Rescue After Leno Howler 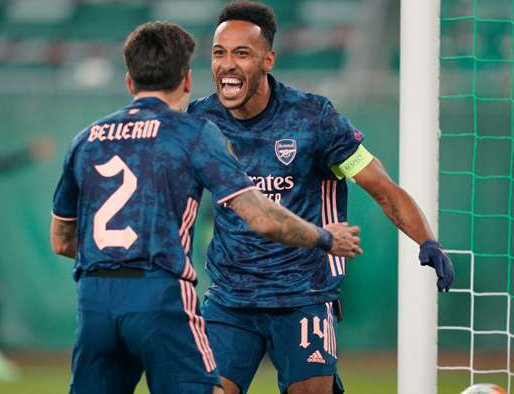 Arsenal have captain Pierre-Emerick Aubameyang to thank for a 2-1 win at Rapid Vienna, who had taken the lead after a Bernd Leno mistake.

Pierre-Emerick Aubameyang came off the bench to rescue Arsenal on Thursday as they got their Europa League campaign off to a winning start with a 2-1 victory over Rapid Vienna.Goal

The club captain scored just four minutes after David Luiz had equalised as the Gunners fought back to win the Group B clash after a Bernd Leno mistake saw them fall behind early in the second half.

Thomas Partey made his first start for the club in a match from which Rapid will feel they should have taken something, with goalscorer Taxiarchis Fountas unable to capitalise on further Leno errors.

Rapid had 12 shots to Arsenal's 11 but could not avenge a 6-2 aggregate defeat in their only previous meeting back in the 1991-92 European Cup.

Arsenal managed more yellow cards (three) than shots on target (one) in the first half, with Thomas going into the book for a stray elbow on Fountas.

The best chances fell to David Luiz, who saw a header well saved by Richard Strebinger, and Marcel Ritzmaier, whose clever backheel almost deflected beyond Leno.

It was Leno at fault for the opening goal, though, the Gunners keeping failing to clear under pressure, allowing Fountas to drill a good finish into the bottom-right corner after the ball fell his way.

Another loose kick allowed Fountas to drive towards the penalty area, but this time Leno was on hand to block his low strike.

The Gunners drew level with 20 minutes remaining, Nicolas Pepe's deep free-kick glanced in by David Luiz, who rose unchallenged in the heart of the penalty area.

Just after another Leno error had given Fountas the chance to restore Rapid's lead, Arsenal struck again. Mohamed Elneny slid a ball through to Hector Bellerin and Aubameyang was on hand to tap in his cut-back.

This is probably the toughest of Arsenal's group games on paper, so Mikel Arteta will be thrilled to have taken all three points even if the performance left much to be desired. 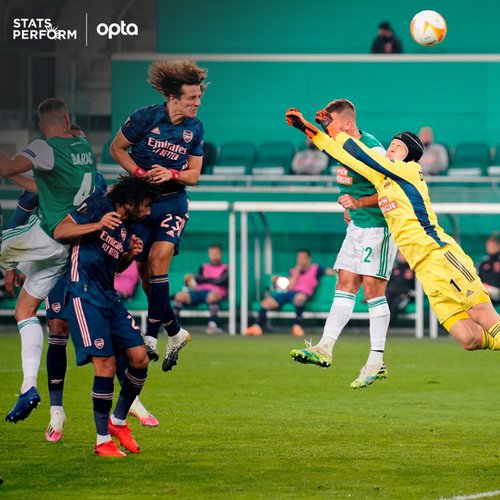 He will not have been overly pleased at having to bring on Aubameyang to get the result they wanted, with Alexandre Lacazette and Eddie Nketiah ineffective.

They are level with Molde on three points, two goals scored and one conceded after the Norwegian side won away to Dundalk.

Thomas looked comfortable at the heart of the midfield, admittedly with Rapid's central trio not offering a great deal of opposition when Arsenal had the ball.

The £45million man won five tackles, more than any team-mate, completed 90.2 per cent of his passes and contested 13 duels.

Few Arsenal players performed to their best, but Leno's loose kicking and decision-making cost his side one goal and could easily have led to two others.

Among Premier League goalkeepers since the start of 2018-19, only Jordan Pickford (11) and David de Gea (nine) have made more errors leading to goals in all competitions than Arsenal's number one.

- Arsenal have won their opening group game in each of the last four Europa League campaigns.

- Taxiarchis Fountas scored Rapid Vienna's opener and his first goal in major European competition with what was his ninth shot (fifth appearance).

Arsenal host Dundalk on matchday two next Thursday, after a Premier League clash with Leicester City this Sunday. Rapid's second group game is away to Molde.

Arsenal spent £70 million ($93m) to bring in Thomas Partey and Gabriel during the off-season and that is already looking like money well spent.

We saw the two big-money summer additions start for the first time for the Gunners on Thursday night and each produced a top class display as Mikel Arteta’s side edged past Rapid Vienna to get their Europa League campaign off to a winning start.

Partey was superb in the middle of the park, showing exactly why Arsenal opted to trigger his £45m ($60m) Atletico Madrid release clause in the final hours of the transfer window.

And behind him, Gabriel continued his impressive start to the season with another showing that suggests the north London club have landed themselves a £25m ($33m) bargain from Lille.

The two newsboys were the stars of what was otherwise an unconvincing show for Arsenal, who looked on course for a somewhat embarrassing defeat when they fell behind six minutes in the second half.

But goals from David Luiz and Pierre-Emerick Aubameyang in the space of just four minutes ensured the Gunners avoided an opening-day slip up in Group B and returned to London with all three points.

The victory will have delighted Arteta, but he will know his side need to improve quickly - especially in the final third - if they are to compete at home or abroad this season.

As has been the way for the majority of games so far this season, Arsenal looked relatively toothless in an attacking sense - with the visitors devoid of the type of creativity that Mesut Ozil - who spent the evening live tweeting the game on social media - can provide.

They managed just 11 shots on the night, one fewer than their hosts. It wasn’t until they went behind and Aubameyang and Hector Bellerin were sent on that they started to really cause the home side problems.

The fact that Aubameyang had three of Arsenal’s 11 efforts on goal and was only on for 29 minutes said it all. But building a new side takes time and, although Arteta’s Arsenal clearly remain a work in progress, there is no doubt the additions of Partey and Gabriel have improved them immeasurably.

Partey started in the defensive midfield role, but demonstrated throughout the 90 minutes that his game is about far more than just breaking up play and protecting the back four.

He had 92 touches, 57 of which were in the Vienna half. No-one in the Arsenal side had more. He also topped the charts for aerial duels (5), tackles (5) and possession gained (8).

It was a superb all-round performance from the Ghana international, one that prompted BT Sport pundit Owen Hargreaves to describe his full debut as “one of the best I’ve ever seen.”

And the fact that Partey can come in and perform like that after just a few training sessions with his new team-mates offers a tantalising glimpse at what could be to come for Arsenal from the 27-year-old.

The performance of Gabriel just behind him was equally as encouraging. The way the Brazilian centre-back has adapted to life in England belies his tender years and lack of top-level experience.

The 22-year-old has already picked up Arsenal’s Player of the Month award for September and could well be on his way to taking the honours again for October given the way he has been playing this month.

Gabriel made five clearances, four interceptions and won possession eight times throughout the 90 minutes and already looks like the dominant figure at the heart of Arteta’s defense.

The recruitment of the Brazilian and Partey has to be applauded, as does the character Arsenal showed to come from behind and get the points against Vienna.

Bernd Leno’s error, when his pass out from the back presented Taxiarchis Fountas with the opening goal for Rapid, could have seen them go into their shell - but it did the opposite.

They battled back well with the introduction of Aubameyang and Bellerin proving decisive. A header from David Luiz off Nicolas Pepe’s header drew the visitors level 20 minutes from time before the two substitutes combined for Aubameyang to turn home the winner.

Arsenal will know they have to improve as the season progresses, but, in Partey and Gabriel, they have two players who are going to make a huge difference in north London.