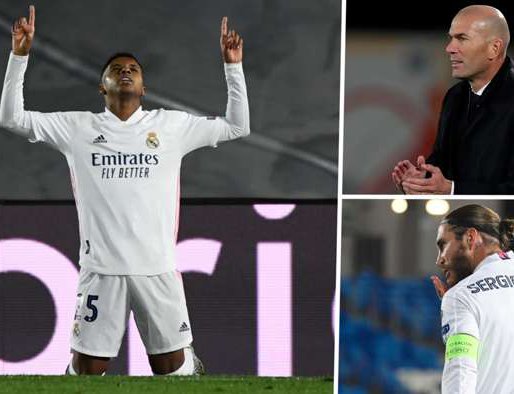 The out-of-favour Brazilian winger came off the bench to net the winner in a dramatic 3-2 defeat of Inter at the Alfredo Di Stefano stadium.

Against Inter on Tuesday night, though, they had an unlikely saviour in Rodrygo Goes, who produced a lethal finish to earn Los Blancos a vital 3-2 Champions League win at the Alfredo Di Stefano stadium.

The Brazilian's last Champions League goal came almost a year ago, in December 2019, and his last strike in any competition was back in February, in a Copa del Rey defeat by Real Sociedad.

The young winger burst onto the scene with a hat-trick against Galatasaray in the Champions League last season, but that quickly became a peak which he failed to get close to reach again during the remainder of the 2019-20 campaign.

Zidane relied on him for his impressive maturity – certainly relative to his compatriot Vinicius Junior – but Rodrygo lacked the dynamism and offensive spark to help Madrid emerge from their creativity slump at the end of last season and start of this.

Marco Asensio, Vinicius, and even Lucas Vazquez had worked their way ahead of Rodrygo in the pecking order, so his brilliant strike not only revived Madrid’s troubled Champions League campaign but also his own prospects at the capital club.

There are still places up for grabs in this Madrid team, with Zidane searching for a starting XI he can rely on.

Defeat by Shakhtar Donetsk on matchday one and last week’s draw with Borussia Monchengladbach exposed Madrid’s fragility and meant that they badly needed a win against Antonio Conte’s own struggling side.

Having seen Hazard score spectacularly against Huesca on the weekend – his first goal in over a year for the club – Zidane unsurprisingly stuck with the Belgian in attack.

Even though he has rarely been fit enough to start, his presence is felt every time Madrid play – they have been missing an attacking talent of his description.

Madrid have scraped by, winning the title last season thanks to blood, sweat and Barcelona’s VAR tears, all the while screaming out for someone who can give them a chance to play in a different way. Hazard’s return to fitness – hopefully for a sustained period of time – could be crucial.

As well as offering his own threat, his presence means defenders can’t focus only on locking down Karim Benzema, Madrid’s best player for the past two years, bar captain Sergio Ramos.

Indeed, Achraf Hakimi forgot all about the French striker as he played a shocking back-pass that left his former Madrid team-mate one on one with goalkeeper Samir Handanovic.

Benzema skipped around the Slovenian and slid the ball into the empty net for his second goal of the European campaign, and fourth in three games across all competitions.

Ramos doubled Madrid’s lead with a perfectly placed header from Toni Kroos’s corner, angling his effort down and into the far corner, leaving Handanovic rooted to the spot. Madrid’s skipper has 100 goals now and such flawless finishing illustrates why.

Inter will complain that both of Madrid’s goals came after subtle foul play, with Ferland Mendy’s push on Hakimi disturbing the defender as he produced his failed back-pass, while Casemiro’s block on Stefan De Vrij was cynical and gave Ramos a free header.

The visitors kept fighting, though, and pulled a goal back after a sensational back-flick by talented midfielder Nicolo Barella paved the way for a clinical strike by Lautaro Martinez, who did his future Barcelona prospects no harm on the night. Indeed, the Argentine also created Inter’s equaliser, with a header into the path of Ivan Perisic, who finished well.

The visitors, bolstered by their impressive comeback, had control of the game at that stage and were searching for a winner, with Martinez striking the post and Perisic flashing a strike inches wide of Thibaut Courtois’s far post – but then Rodrygo appeared.

Vinicus's low cross may have been destined for Benzema but it fell at Rodrygo's feet. For a second, the chance looked like it was gone, as defenders closed in on the 19-year-old. Rodrygo got his shot away and it ripped into the top corner, leaving Handanovic no chance.

His goal and Madrid’s victory are by no means definitive moments for player or club, but they are important ones.

Despite the win, Madrid still sit third in Group B. Despite the goal, Rodrygo is far from assured of a game at the weekend.

It's no wonder, then, that the teenager looked to heavens after his later winner. Both he and Zidane will feel their prayers were answered on the night of another minor miracle in Madrid.